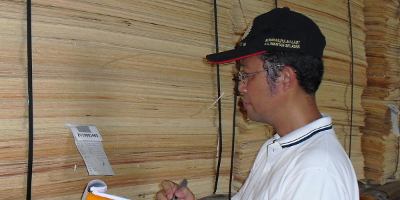 A quick guide to how the VPA was implemented and works

When Indonesia started issuing FLEGT licences last November, verifying the legality of its timber exports to the EU prior to despatch, it was billed as a milestone in global efforts to combat illegal logging and illegal wood products trade.  Since then the country and its FLEGT licensing system has attracted attention from across the global timber trading community and interested parties, mainly from Indonesia’s export markets and other countries engaged in the EU Forest Law Enforcement Governance and Trade Voluntary Partnership Agreement initiative (FLEGT VPA), but not exclusively.

Governments, businesses, NGOs and other civil society bodies have shown interest both in how Indonesia reached this point and how its legality assurance framework and licensing system operates. Missions from abroad are in fact now undertaking fact-finding trips there to take a closer look.

SVLK – the core element of the VPA

Indonesia’s FLEGT-licensing operation is based on its mandatory certification system called the ‘Sistem Verifikasi Legalitas Kayu (SVLK)’, translated as timber legality assurance system. This evolved as a stand-alone legality assurance system before the Indonesians started implementing their FLEGT VPA and was then assimilated as a core element of the latter.

The SVLK was developed by a range of public and private sector forestry stakeholders to ensure that timber was harvested, transported, processed and traded according to Indonesian laws. The process began in the early 2000s with multi-stakeholder dialogues, where timber legality was defined. Including government, industry and civil society input and supported by the UK Department of International Development, these discussions analysed all Indonesian forest-related legislation, covering everything from rules regulating issue of permits, social safeguards, environmental impact assessment, forest management and timber production, transport and trade, through to forest-related ‘fees and export provisions’.

The resulting SVLK (as set out in Permenhut P.43 / Menhut-II / 2014 and LH and K no. P.95 / 2014) guarantees timber forest management and/or timber legality and timber tracking, validated through Sustainable Production Forest Management (PHPL) or Timber Legality (LK) certification or a Suppliers’ Declaration of Conformity Document (DKP).The sustainable forest management standard PHPL is mandatory for all natural state forests. Over 13 million hectares of natural production forest are already or will be certified against this standard.

Compliance with the SVLK is now mandatory for most Indonesian timber products and all sizes of timber and wood products business, from forest to factory, whether trading in domestic or export markets. Although, rather than full PHPL or LK certification, smaller companies handling timber from sources classified as low risk (privately owned forest or state-owned SVLK-certified plantation) can demonstrate compliance and feed wood into SVLK supply chains via the simpler Suppliers’ Declaration of Conformity (DKP).

SVLK compliance is verified by auditors called Conformity Assessment Bodies (CABs), which are mandated by government and overseen by the KAN accreditation body. Once they give operators an audit pass, they issue them with a legality certificate. This is valid for three years in the case of large companies and up to ten for small-scale or low risk operators, with the former also subject to surveillance visits annually and the latter two groups every two years.

If Indonesian operators fail to adhere to the legality criteria their legality certificate can be withdrawn. They can also face legal charges if their goods are proven illegal. In such cases the timber can be confiscated.

Prior to the start of FLEGT licensing, conformity of exports with the SVLK was a mandatory requirement for all exports, validated by issuance of V-Legal Documents from official licensing bodies. Then, once authorised to start FLEGT licensing, through a joint decision from the EU and their own government, the Indonesian authorities effectively re-branded V-Legal Documents for EU exports as FLEGT Licences. At the same time, under their FLEGT VPA, Indonesia has to maintain the same legality assurance standards on timber sales to the rest of the world as the EU, so the V-Legal label has been retained for exports elsewhere (http://www.flegtlicence.org/v-legal-documents).

After the start of FLEGT-licensing, no non-licensed timber or wood products could be imported in the EU from Indonesia.

Information exchange between EU and Indonesia

There are 22 licensing authorities issuing FLEGT licences, which must now accompany every timber export consignment to verify it originates from a registered operator with a valid legality certificate. These report to the central Licence Information Unit (LIU) in the Ministry of Environment and Forestry, which maintains records for all FLEGT/V-Legal licenses, with core data available for review on the online SILK Timber Legality Information System. It’s also the LIU’s role to manage information exchange between EU authorities and the Indonesian licensing authorities, a process which to date has worked smoothly, according to the FLEGT Competent Authority of a leading EU tropical timber importing state.

“We only connect with the LIU, which coordinates the licensing bodies and pools all the relevant information,” said the CA spokesperson. “They tally their licence information against ours quickly and come back to us rapidly on any queries or inconsistencies and we can also access data on the SILK system.  From what we see, the Indonesians are running a robust, efficient FLEGT operation.”

FLEGT licenses designed to be tamper-proof

Once an EU competent authority confirms it has received a FLEGT-licensed consignment, SILK will automatically update the FLEGT licence’s record, ensuring that the same licence cannot be recorded again”.

To ensure standards are maintained, the overall functioning of Indonesia’s legality assurance and licensing apparatus also undergoes annual ‘periodic evaluation’ and further ongoing assessment and appraisal is undertaken by the Joint Implementation Committee (JIC), which comprises elected Indonesian and EU representatives, and was established to oversee Indonesia’s VPA implementation. Its function includes reviewing assessments of the TLAS and any complaints about the application of the FLEGT licensing system. It also publishes annual reports and conducts other FLEGT-related tasks that EU and Indonesian members agree to carry out jointly. It is responsible too for analysing the impacts of the VPA, including on indigenous and tribal peoples.

Indonesian civil society organizations, alongside industry and government, played a key part in the development of the SVLK and subsequently the implementation of the country’s FLEGT VPA. Today they also perform a role in providing independent monitoring of the operation of the SVLK and FLEGT licensing, a role enshrined in legislation. There are numerous bodies involved, but one of the most prominent is the Independent Forest Monitoring Network (JPIK), a national grouping of CSOs. A lead figure in the organisation, Mardi Minangsari of the Environmental Investigation Agency, said it and other organisations were having an important influence.

“As we talked and involved more stakeholders, government and timber businesses became increasingly receptive and today listen to our concerns and appreciate our input,” she said. “CSO involvement also lends credibility to the SVLK and FLEGT licensing and our formally-acknowledged role as independent monitor has already led to reviews and operational improvements.”

It’s taken as evidence of the confidence the Indonesian’s have in their FLEGT framework that they are opening it to scrutiny from overseas visitors, with fact finding missions coming from a number of Asian VPA and other states, and most recently Ghana.

In a recent report in the European Timber Trade Federation Newsletter, the visitors expressed interest in everything from Indonesia’s engagement of NGOs and civil society in the development of its TLAS, to its establishment of auditing and independent monitoring of its wider FLEGT licensing system. One particularly noted the importance of inclusion in Indonesia’s progress through the VPA and subsequent management of FLEGT licensing. “It presented a picture of coordinated effort in all areas of policy making and implementation. That’s a message we’ve clearly received,” he said.