The Dutch economy may have been less impacted by the COVID-19 pandemic than others in Europe. However, the consequences of the initial Spring 2020 lockdown and later containment measures to combat subsequent waves of infection have been severe.

The result in Q2 2020, according to the, the Netherlands Bureau for Economic Analysis (CPB), was economic contraction of 8.5%. That was less than in the UK, Belgium and Germany, but still the greatest quarterly downturn recorded by the Netherlands, and GDP shrinkage for the year, following an upturn in the second half, was forecast at 5%. Household consumption fell 5.9% over the year and business investment 7.5%, while exports were expected to fall 5.2%.

The CPB initially predicted that a serious second pandemic outbreak could lead to further contraction in GDP in 2021. However, its prognosis improved after the economy gained momentum in Q2 2021, and its revised forecast for the year is for 2.2% growth and 3.5% in 2022. This compares with the European Economic Forecast figures of 1.8% growth in 2021 and 3% in 2022. Underpinning the CPB’s predictions for expansion were government fiscal support measures continuing into June 2021 and the reopening of shops reviving consumer spending, with the latter boosted by the increase in consumer savings during the pandemic. Unemployment is expected to rise to 5% in 2021, but fall back to 4.5% in 2022.

Netherlands new house building rose 7% in 2019, hitting an annual record of 71,500 units, with the sector driven since the 2008-12 recession by government stimulus measures and low interest rates. However, building permits falling in 2018-19 due to a lack of construction sites and industry capacity and major issues with nitrous oxygen and polyfluoryl alkyl soil contamination blocking development of 8,000 sites made for an uncertain outlook. This was compounded by the pandemic and the number of housing completions in 2020 was variously predicted by leading banks to fall by between 12% and 30%.

Producer confidence levels in the timber and construction materials trades were reported down 25% in April and May 2020, but recovered by August-September as lockdown restrictions were relaxed. And despite the worsening pandemic situation in October, and the fact, according to Statistics Netherlands, that timber industry turnover in Q3 was still 12% below the same period in 2019, trade feedback in the IMM Netherlands 2020 report survey indicated the Dutch hardwood sector was actually upbeat about the short-term. The European-wide boom during the health crisis in DIY, home and garden improvement was fueling demand and increased new build activity and building projects from 2019 going to completion stage, where most hardwood is used, were both seen as causes for optimism. In fact, combining this with a less rigid COVID restriction regime and IMM survey respondents on average predicted a 10% increase in 2020 turnover, and up to 30% in the DIY and gardening products sub-sector.

Prior to this had been a period of tropical timber decline in the Netherlands, with the market hit severely by the international financial crisis, the further rise of timber and non-timber tropical alternatives and reported continued environmental prejudice against materials and products from tropical forests.

But, while wood substitutes continue to make market inroads, respondents to the IMM 2020 Netherlands survey maintain that in today’s increasingly climate conscious era, and with growing focus on bioeconomic development, timbers’ carbon and wider environmental credentials are now playing in its favour.

FLEGT licensing providing exemption from EUTR due diligence was also seen as lying behind a small increase in tropical timber market share, with some reporting of switching from unlicensed to licensed product. But while EUTR itself had resulted in some ‘shifting in suppliers’, it does not seem to be credited with growing tropical timber sales.
After contracting for a period, imports of tropical sawn timber seem to have stabilized or shown a slight recovery in recent years, with a particularly marked increase from Cameroon in 2019, although some further decline in sales was expected due to the pandemic.

After a decade of downturn, tropical wood furniture imports also increased, up 30% between 2016 and 2019. They contracted once more in 2020, but only by 1% in the first half.

A new force on the Dutch wood furniture market is India, with its sales nearly tripling from 2015-2019, although they decreased 35% in the first half of 2020.

Price and availability are current issues for the Dutch tropical timber trade. But respondents to the IMM 2020 Netherlands report survey were upbeat the increase in DIY and garden product business triggered by pandemic lockdown – which for some boosted wood garden products sales 30% – will to some extent persist into 2021. Tropical timber demand for public civil and marine engineering also held up well as the authorities brought projects forward to support the economy.

Longer term construction demand is expected to grow too, with the Netherlands reported to need 95,000 houses a year to 2024, and 75,000 annually after that to 2035. This, combined with greater focus on building materials’ carbon and life cycle assessment performance, is forecast to boost timber and wood products consumption.

The Netherlands’ largest tropical product category from VPA partner countries is sawnwood (30.8%), followed by joinery (19.8%), furniture (19.6%) and plywood (8.7%). Malaysia, Cameroon and RoC are its biggest tropical sawnwood suppliers, Indonesia and Malaysia of joinery (with a proportion produced in Dutch-owned factories) and Indonesia and Viet Nam of furniture, with the latter’s Netherlands market share rising 1.7% in 2019, and Malaysia’s decreasing 2.8%.

According to latest analysis, the biggest Dutch tropical sawn hardwood consumer is the combination of construction and joinery, accounting for 46%. Civil and marine engineering is next on 32% , followed by DIY and garden sectors, timber traders and joinery.
The biggest tropical plywood consumer is the furniture and interior design sector accounting for 20.9% of Dutch imports. Next comes joinery on 16%, DIY and garden sectors 12.1%, civil and marine engineering 12%, construction 9.9%, other industry 8.3%, with the balance accounted for by individuals and a range of other users.

Trade with all top 5 VPA partners was affected during the course of the year by the COVID-19 pandemic, even though, owing to order cycles and other factors, decline did not always directly coincide with the duration of the first European lockdown.

Imports of wood mouldings and plywood were more steady. Moulding imports dipped slightly in 2017, before growing slowly in the 2018-2020 period. Plywood imports rose all through 2017-2020, but at a very slow pace.

The Netherlands imports primarily sawn wood and joinery from Malaysia; together these two product groups accounted for around 70% of total imports in 2020. The remainder was made up of mouldings and some furniture.

All of Viet Nam’s top five timber products exported to the Netherlands got off to a strong start in 2020 but saw major fluctuations throughout the year. Total imports fell from €82.6 million in 2019, to €78 million in 2020.

Viet Nam supplies primarily furniture (seats and other) to the Netherlands. Other relevant product groups include “other wood products” as well as paper products.

2019 was the best of the last five years for Dutch timber product imports from Cameroon, with deliveries totaling €17.3 million. However, this was still only a fraction of pre-financial crisis levels, with imports in 2007 worth €54.4 million in 2007).

Trade perceptions and awareness of FLEGT

Interestingly some respondents to the survey for the 2020 IMM report for the Netherlands modified their response on their level of awareness of FLEGT during interview, revising it down to partially aware. They realized through the course of the process that they knew less about it than they thought. But all considered themselves aware to some degree; 43% fully and 57% partially.

They also came out well in more in-depth knowledge of the FLEGT process, with 50% or above saying they knew, for instance, that the issuing of FLEGT Licences required all parties in the supply chain to be covered by a legality or sustainable forest management certificate or Suppliers Declaration of Conformity and that Licences indicated that products comply with a range of laws and regulations covering such issues as forest management, environmental aspects, labour rights and community benefits. Seventy per cent or above were either aware or partially aware on a range of such points.

As far as their perceptions of FLEGT are concerned, 80% of respondents agreed that licensing makes importing from Indonesia easier due to its granting exemption from EUTR further due diligence. In connection with this, they rated enforcement of the EUTR highly in the Netherlands – the Dutch CA undertook 97 risk-based EUTR company checks and issued 22 enforcement actions through 2017 to 2019. However, there was support for greater digitization in both EUTR and FLEGT processes and their remains concern about EUTR implementation in some other EU countries.

The majority of survey respondents (78%) said they would give preference to licensed products over unlicensed and two said they had switched from Malaysian to Indonesian suppliers as it ‘released them from due diligence obligations’. However, due to the part other criteria play in procurement, most felt licensing had not actually grown the market for Indonesian timber and wood products.

An improvement was seen on the level of ‘teething problems’ with FLEGT Licence processing, such as mismatches in product codes between Indonesia and the Netherlands, with 59% agreeing these had been largely resolved. Those who only partially agreed with this statement said they were still experiencing HS code issues on Indonesian products but with Belgian customs rather than in the Netherlands.

On the survey question ‘FLEGT only means legal and has nothing to offer on sustainability’, 58% agreed and 26% partially agreed with the proposition. This is seen as reflecting the third-party certification preference of the Dutch market, with 67% of tropical hardwood and 78% of tropical plywood being FSC or PEFC-certified and the Netherlands Timber Trade Association actively pressing to increase these levels. Further underlining the point, most respondents more strongly agreed than disagreed with the other proposition that their company gives preference to certification over a FLEGT Licence, while more disagreed than agreed with the proposition that FLEGT Licences should be considered as evidence of sustainability in procurement policies. And there is continuing debate about whether FLEGT licensing should be given special status in Dutch public procurement policy.

Some respondents actually saw FLEGT as a threat to certification, with those further down the supply chain said to be happy with any type of environmental trademark and likely as a result to give equivalence to FLEGT and the main certification schemes.

Some respondents said that the availability of FLEGT-licensed timber had already led to a reduction in the share of their imports taken by third-party certified or verified legal timber, with 19% reporting a slight decrease in FSC-certified, 16% in PEFC-certified. The introduction of the EUTR and associated compulsory due diligence was seen to have less of an impact on import share of certified material. Some also noted that, following revision, Indonesian forest laws and regulations incorporate ‘important elements related to sustainable forest management’.

Overall, Dutch respondents to the 2020 IMM Netherlands Report Survey, were more positive than previous surveys about the future of the Dutch market for tropical timber. This was found to be largely due to increased communication and understanding of timber and forest’s climate change mitigating and wider environmental and well-being benefits, and notably the carbon benefits of timber in building. 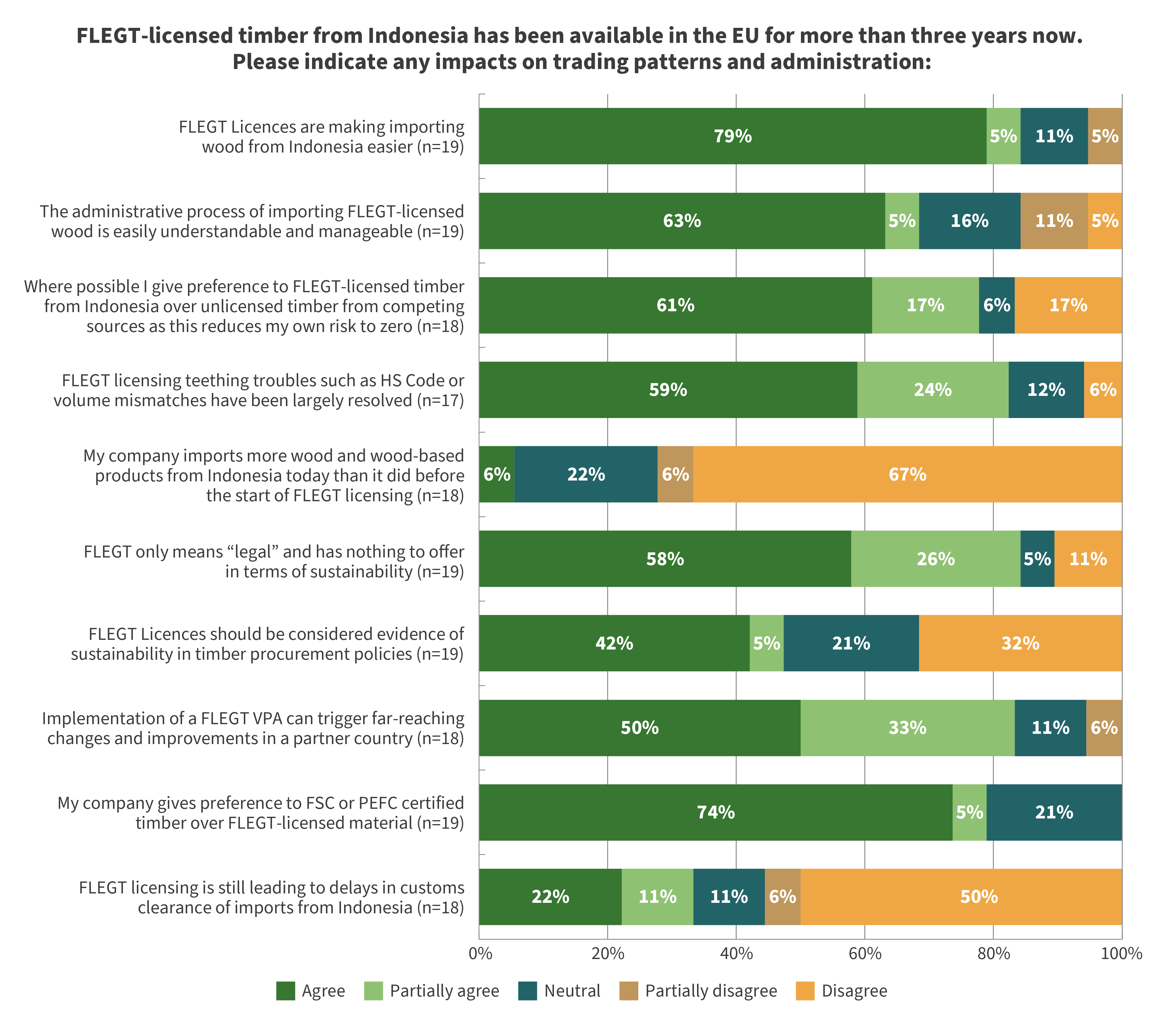