In Belgium, the COVID-19 pandemic led to a sharp fall in economic activity in the first half of 2020. In the second quarter, in particular, the GDP experienced unprecedented decline by 15% year-on-year. The decline in GDP for the full year was slightly less pronounced than initially feared; the EC estimated it at -8.4% in its Autumn 2020 Forecast.

After the sharp fall in March-May, economic activity in Belgium rebounded from June onwards. The business climate started to firm up in the manufacturing industry and the trade sector between June and October. However, the outlook for 2021 became less optimistic towards the end of 2020, with investment plans put on ice, less security in employment and perceived growing risk of bankruptcy. National Bank of Belgium (NBB)’s monthly business survey showed deteriorating in business climate in November, with the pessimistic outlook affecting all types of trade.

The Belgian construction sector, a significant consumer of timber and timber products, was hit particularly hard by the COVID pandemic, with turnover falling by 15.7% in 2020. A survey conducted by the Belgian Construction Confederation among 359 of its members at the end of 2020 revealed that the order books of 56% of responding building contractors are below their normal levels. For 51% of respondents order books were filled for less than 3 months and for about 20% order books were said to cover less than a month. 38% of building contractors were planning to cut down on staff by the end of the year.

The furniture sector accounts for around 40% of total turnover of the Belgian wood and furniture industry, according to Fedustria (€2bn in 2019). In the first half of 2020, turnover dropped by around 12% to €925m. These losses were incurred in spite of strong business in January and February.
Exports also fell by 10.7% overall, mainly due to the shutdown in France, the most important export market, and related decline in exports to this country by more than 21%. On the other hand, furniture shops and DIY stores in the Netherlands and Germany remained opened during the spring lockdown and this offered some prospects for Belgian exporters. The German market showed an increase of 15.8%. In almost all other markets the figures fell into the red.
In the third quarter, the furniture as well as DIY sector experienced a rebound as lockdowns were lifted and homeowners put their savings for travel and leisure into house improvements, which boosted the turnover of DIY chain stores but also business in the renovation sector. Furniture manufacturers received new orders, started up production again and were able to make up for some, if not all, of the income losses suffered during the months of March and April.
Uncertainty returned in the fourth quarter with the resurgence of the virus together and new restrictive measures taken by the authorities.

According to the 2020 IMM report for Belgium, the year started well, with solid demand for tropical hardwoods in January and February. In March, the COVID-19 lockdown brought a standstill of several weeks. Business restarted gradually and from mid-April there was a boom in demand for outside decking and cladding material, mainly due to the lockdown: many homeowners decided to undertake renovation of the house and garden rather than going on holiday. Regardless of their origin, decking and cladding markets were reportedly booming and more than compensated the drop in demand for other tropical hardwood products such as scantlings, window frames, interior products.

Most of the importers interviewed by the IMM reported a surprisingly strong recovery throughout the summer. However, the outlook towards the end of the year was more uncertain again, with the building sector under serious pressure and COVID-19-related restrictions reinstituted.

According to the 2020 IMM report for Belgium, the year started well, with solid demand for tropical hardwoods in January and February. In March, the COVID-19 lockdown brought a standstill of several weeks. Business restarted gradually and from mid-April there was a boom in demand for outside decking and cladding material, mainly due to the lockdown: many homeowners decided to undertake renovation of the house and garden rather than going on holiday. Regardless of their origin, decking and cladding markets were reportedly booming and more than compensated the drop in demand for other tropical hardwood products such as scantlings, window frames and interior products.

Most of the importers interviewed by the IMM reported a surprisingly strong recovery throughout the summer. However, the outlook towards the end of the year was more uncertain again, with the building sector under serious pressure and COVID-19-related restrictions reinstituted.

Trade with all top 5 VPA partners was affected during the course of the year by the COVID-19 pandemic, even though, owing to order cycles and other factors, decline did not always directly coincide with the duration of the first European lockdown.

Belgian imports from Indonesia, its second most important supplier among the VPA partner countries after Cameroon, slowed down between October 2019 and February 2020 and then bounced back between February and June 2020. Year-on-year increases in Indonesia-Belgium timber products trade in the first half of 2020 were mainly due to strong recovery in deliveries of “other furniture”, the single most important product group by far, and plywood until May/June 2020. However, imports of “other furniture” then dropped sharply in the second half of the year. Imports of all other product groups also trended downwards in the second half of the year, with exception of charcoal, which remained stable.

Belgian plywood imports from Indonesia had reached a historic high in 2017, but then fell rather sharply in 2018, 2019 and again in 2020 due to stiff competition from Russia, where manufacturers had significantly reduced prices for competing plywood grades, especially during 2019 and most of 2020. This situation may see another turnaround in 2021, as European importers are reporting supply shortages and rising prices for Russian birch plywood in the first few months of 2021. However, given the Covid-19 related difficulties in logistics and availability as well as costs of freight capacities, it remains to be seen whether Indonesian suppliers can take advantage of this opportunity.
Furniture imports from Indonesia remained slightly above 2019 levels in the first nine months of 2020 (+3%), thanks to a strong performance of seating furniture and high imports of “other furniture” up until May. Indonesia remained the single most important supplier of tropical hardwood furniture to Belgium in 2020.

Trade with Cameroon was extremely volatile in 2020, dipping sharply in the first quarter, before recovering strongly from April onwards and dipping again in the last quarter. Total Belgian timber product imports from Cameroon in 2020 were well below 2019.

Belgian tropical sawn hardwood imports from Gabon showed a similar rate of decline as imports from Cameroon in the first nine months but recovered again towards the end of the year. The sharp increase in imports from Gabon in the second quarter of 2020 was owing to an individual project led by ATIBT with both French railways (SNCF) and Belgian railways. It involves railway sleepers which are sourced through various private operators in this sector.

Belgian furniture imports from Viet Nam, the second most important supplier from the tropical region, showed strong fluctuations during 2020 . Imports of “other furniture” and furniture seats rose sharply up until the end of February, then dipped strongly, before rebounding again in August and September and falling again towards the end of the year. Imports of wood joinery were more stable, with only relatively minor dips between May and July and another reduction between October and December, which followed a short period of recovery in September.

Furniture and joinery as well as tropical sawnwood are the key product groups sourced by Belgian importers from Malaysia. All product groups saw significant fluctuations during 2020, with decline in the first half of the year followed by recovery from June or July onwards. However, imports of wooden joinery started to decline again at the end of the year, while all other product groups remained stable or continued to trend upwards.

Since the first quarter of 2020, Belgian IMM survey respondents reported an increasing number of checks of FLEGT-licensed timber shipments from Indonesia by Belgian customs authorities. Rather than just double-checking the various copies of the FLEGT Licence, authorities would, on a frequent basis, block containers and only release them after physical checks, including laboratory testing of species. This process was said to take weeks or even months in some instances. Importers commented in interviews with IMM that these proceedings would be harmful for the market development of FLEGT-licensed timber and were making Indonesia less attractive as a supplier.

These issues are also reflected in the IMM 2020 survey results on experience with importing FLEGT-licensed timber. Responses from Belgium were much more negative than the average among the six countries.

The Belgian Competent Authority continues to consider FLEGT-licensed timber as automatically legal. However, seeing as shipments are nonetheless blocked by customs, this is not helping the importer.

Trade Awareness and Opinion of FLEGT

Regarding the wider benefits of FLEGT, almost 50% of respondents felt that the Indonesian FLEGT-licensing scheme “includes requirements in terms of sustainability”. However, the dominant feeling was that that FSC (and in some instances PEFC) would go further and be more effective in terms of forest protection.
FLEGT-supportive respondents said more awareness raising was needed among specifiers and decision-makers, and especially public procurement officers and policy makers. This should be combined with promotion of tropical timber in general, addressing widespread environmental prejudice. 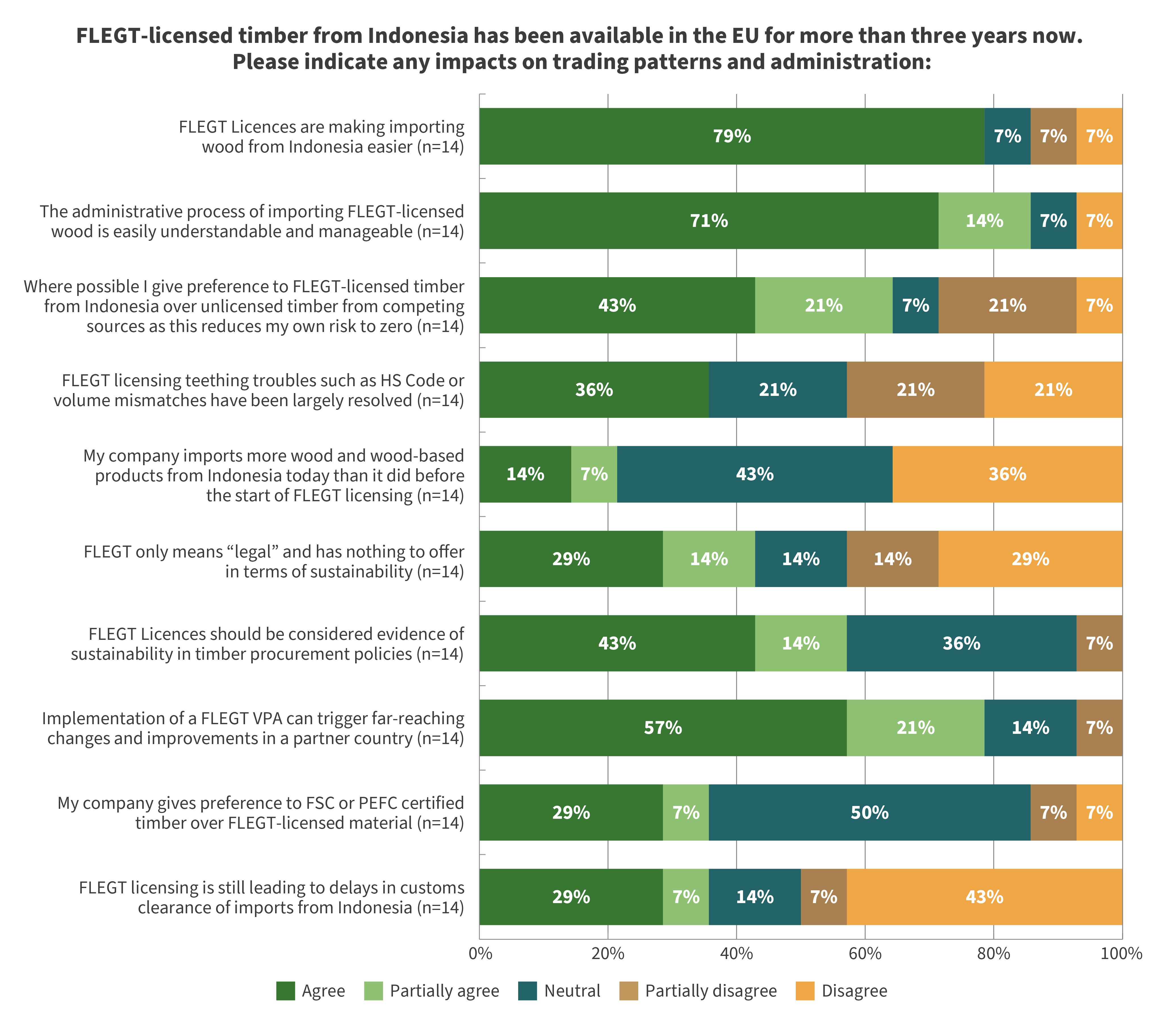