In 2020, the Italian economy had contracted by -8.9%, a larger loss than in most other European economies and the largest economic decline in Italy since the end of World War II. The fall in GDP was driven primarily by a drop in consumption (-10.7%) triggered by restrictions imposed especially during the first wave of the COVID pandemic, which had hit northern Italy particularly hard.

In 2021 GDP recovered, with a growth of 6.5% offsetting most of the pandemic-incurred losses by year-end. However, in the second half of the year energy prices increased significantly and caused renewed uncertainty. According to the European Commission’s Winter Economic Forecast the short-term outlook is now “clouded by protracted supply disruptions and sharply rising energy prices. Eroding purchasing power and softening consumer confidence are expected to dent real GDP growth in the near term, especially consumer services”.

The Winter Economic Forecast was assuming that energy prices would peak in the first quarter of 2022 and Italian exports were expected to continue the strong performance shown in 2021. However, this Forecast did not yet factor in the war between Russia and Ukraine.

COVID was expected to cause only minor disruptions in 2022, given that high vaccination rates were considered likely prevent a significant tightening of containment measures.

Timber product consumption in Italy dropped by -7,5%, a trend which was closely linked to the health emergency phase and the lockdown imposed during the first phase of the pandemic.

Later during 2020 and 2021, the drop in wood consumption was contained by a boost in demand for home improvement, decoration and gardening products. Homes were redecorated and repurposed as more Italians worked and studied from home and spent time in their private gardens during the pandemic.

According to a survey carried out by Italian timber trade federation FederlegnoArredo, the main difficulties encountered by companies involved in the wood sector during 2020 were the problems related to limited transport and shipment capacities as well as a lack of events and trade shows.

In 2021, companies cited difficulties linked to raw material shortages and spiralling costs and, once more to a lack of containers and high freight rates.

Italy is one of the largest EU exporters of wood furniture (alongside Germany and Poland). The COVID-19 pandemic had a strong impact on the wood furniture sector, with sharp declines in both domestic and export sales, especially in the second quarter of 2020.

Several respondents to the IMM trade survey in Italy blamed the subdued trend in tropical timber imports over the last decade at least partly on the EU Timber Regulation. In 2021, more than one-third of respondents said their imports of tropical timber had declined, in some instances sharply, due to the introduction of the EUTR and difficulties in obtaining credible documentation to satisfy due diligence obligations, especially in Africa. These importers often stopped importing directly and now purchase tropical timber products through other European imports.

Brazil is by far the most important supplier from tropical regions to Italy. In 2021, Brazil accounted for $949 million almost three quarters of Italy’s total tropical timber product imports. The bulk of Brazil’s timber product exports to Italy is accounted for by pulp as well as some plywood, and small quantities of fuelwood, joinery, mouldings and paper.

Even though they only make up a fraction of its overall deliveries to Italy, Brazil has also been the most important tropical supplier of HS44 wood products to the Italian market since 2017, followed by Cameroon, Gabon, Ivory Coast and Indonesia.
When it comes to furniture from tropical regions, Viet Nam is the most important supplier, followed by Indonesia, India, Mexico and Thailand.

One worrying trend in Italy is that timber imports from Myanmar have continued at relatively high levels even after the EU Member State FLEGT/EUTR Competent Authorities formulated their joint position on such imports under EUTR in 2018. The joint position is making importing timber from Myanmar into the EU practically impossible. Importers in all other key EU countries monitored by IMM have stopped or at least drastically reduced imports from Myanmar as a result. However, imports into Italy and some south-eastern European Member States, mainly Croatia and Greece, have continued at a comparatively high level or even increased.

Italian EUTR Competent Authorities have sanctioned several importers of timber products from Myanmar in the last few years. However, according to the 2021 IMM report for Italy, such sanctions are usually appealed against by importers and difficult to ultimately push through in court.

Italy’s trade with VPA partner countries has never really recovered from the global financial and economic crisis. In 2020, imports from VPA partner countries totalled $212 million, compared to $500 million in 2010 and $814 million in 2007, before the financial crisis. In 2021, imports recovered a little, to $235 million but remained far below historic levels.

When considering all products (HS44, 47, 48, 94), Indonesia has been the most important supplier among the VPA partner countries since 2016, followed by Cameroon, Ivory Coast, Viet Nam, and Gabon.

In 2021, Italian survey respondents again called for completion of VPA implementation in a larger number of countries to help with EUTR due diligence. Respondents were assuming that tropical timber imports from African countries, in particular, were likely to decline further in coming years, due to a lack of FLEGT-licensed, a shortage of certified products and related difficulties in procuring documentation to satisfy EUTR due diligence.

Another factor likely to limit future supply from Africa would be log export bans.

In 2020, Italian survey respondents again called for completion of VPA implementation in a larger number of countries to help with EUTR due diligence. Respondents were assuming that tropical timber imports from African countries, in particular, were likely to decline further in coming years, due to a shortage certified and lack of FLEGT-licensed material and difficulties in procuring documentation to satisfy EUTR due diligence.

Another factor likely to limit future supply from Africa would be log export bans.

Italy’s imports from the country’s five most important trading partners among the VPA countries have all declined over the last decade. Indonesia experienced a particularly sharp fall between 2010 and 2015 but imports recovered after the beginning of FLEGT Licensing, especially in 2016 and 2019. The trend then reversed again in 2020 and 2021 brought no recovery either.

Italian imports of timber and timber products from Indonesia were flat in the two years immediately after the start of FLEGT Licensing in November 2016. 2019 then saw an increase from $72 million in 2018 to $75 million. However, in 2020, imports fell again to $68 million, with imports of all product groups, except for furniture seats, lower than in 2019. The negative trend continued also in 2021, with imports falling to a historic low of $52 million. In the last year, one of the main reasons for this negative trend was also the price increase of logistics, mainly due to the shortage of containers, especially from Asian countries.Paper accounts for the bulk of Italy’s imports from Indonesia and was largely responsible for the fall in overall imports over the last two years. Paper imports peaked at $27 million in 2019 and dropped to just $13 million in 2021.

By contrast, the import of furniture seats, the second most important product group has continued the positive trend shown since the beginning of FLGE-licensing throughout the COVID pandemic and stood at $11 million in 2021. Imports of “other furniture”, plywood and wood mouldings recovered a little in 2021, while joinery imports were flat at a very low level.

According to the IMM survey in Italy, Italian importers do not seem ready to change their supply chains to any larger extent in favour of Indonesia at the moment, in spite of the acknowledged advantages regarding EUTR due diligence. One reason for this reluctance is that FLEGT Licenses, unlike FSC certification, are not considered a marketing tool and that there are no public or private campaigns promoting FLEGT-licensed timber at the moment, according to the 2020 IMM report for Italy. Another reason identified by the report is the strong tradition of working with African suppliers and using African species.

Cameroon is the most important supplier of HS44 wood products to Italy among the VPA partner countries. Imports from Cameroon underwent some significant fluctuations over the last decade; imports declined in both 2019 to $58 million and in 2020, to $47 million. In 2021, there was a small rebound to $55 million.

Sawnwood accounted for around two-thirds of Italian timber product imports from Cameroon and most of the remained consisted of veneer.

According to the IMM 2020 report for Italy demand for timber products from Cameroon and the other African VPA partner countries was strongly affected by the COVID-19 lockdown in the second quarter of 2020. Business restarted only gradually, with some recovery in demand for exterior cladding and decking. In 2021, imports were restricted by a lack of shipping capacities.

Italy’s timber product imports from Viet Nam peaked in 2008 at $57 million and were cut almost by half during the financial crisis. In 2014, they hit rock bottom ($35 million) but then recovered some ground between 2015 and 2019.

Almost 80% of Italy’s imports from Viet Nam last year were accounted for by furniture, with only very small volumes of “other wood products” and some paper products imported besides.

Gabon used to be an important supplier of wood products to the Italian market 10 years ago, but shipments have declined sharply over the last decade, from $58 million in 2010 to just $25 million in 2019. Despite the COVID pandemic, 2020 and 2021 saw some recovery in imports from Gabon, which totalled $23 million in 2020 and continued to rise to around $25 million last year.

The increase over the last two years was mainly due to growth in imports of veneer, which temporarily even overtook sawnwood as the most important commodity traded between Gabon and Italy in 2020. However, sawnwood imports also recovered slightly in 2021, making sawnwood once more the most important product. Plywood imports had grown a little between 2017 and 2020, but declined again slightly in 2021.

Awareness and perception of FLEGT

Awareness of the FLEGT process in Italy continued to improve in 2021, with 63% (2020: 60%) of respondents indicating that they were fully aware and 38 (2020: 40%) partially aware. In both years there were no respondents rating themselves as “totally unaware”.

Italian IMM survey respondents did not report any problems with the acceptance of FLEGT Licenses as sole proof of legality in 2021, either.

Moreover, Italian survey responses on the ease of importing FLEGT-licensed timber in Italy and the administrative processes involved improved significantly between 2020 and 2021. In 2021, 69% of Italian respondents (2020: 60%) found that FLEGT Licensing were making importing wood products from Indonesia easier. Moreover, at 75% (2020: 33%) a much higher proportion of Italian respondents agreed that the administrative process was easily manageable and understandable.
Like in 2020, Italian importers reported no issues with FLEGT-license mismatches in 2021 either and all respondents either agreed that FLEGT teething issues were largely resolved or were neutral on the subject.

Perception of FLEGT as evidence of sustainability 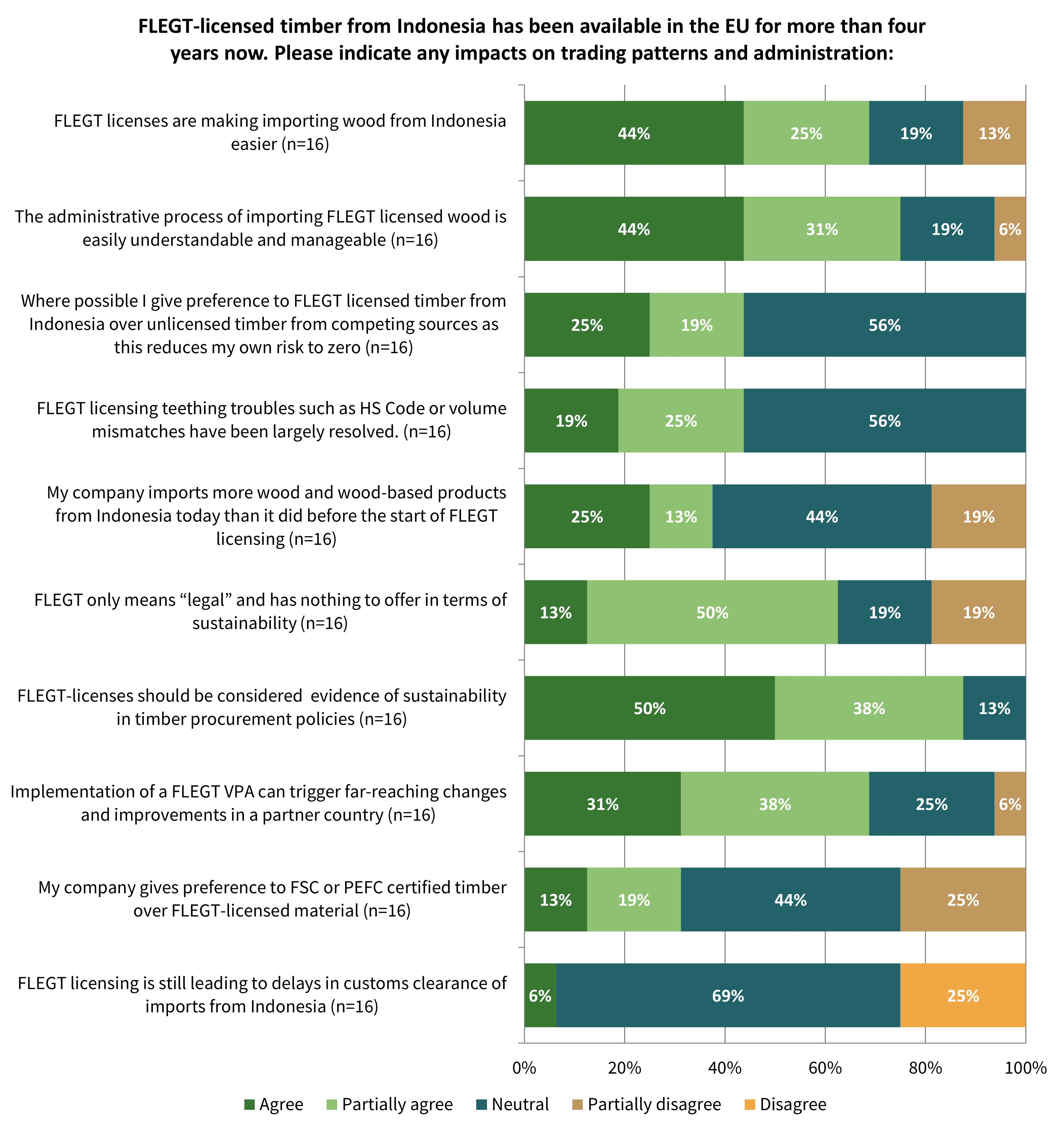