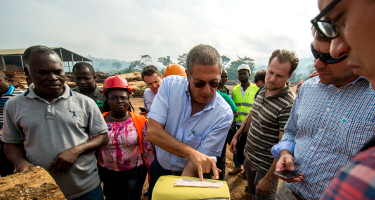 The FLEGT Voluntary Partnership Agreement (VPA) initiative involves negotiations and programs in 15 tropical counties which together supply over 80% of the international tropical timber trade, by value. While the time taken by countries to reach the licensing stage has been a focus for criticism, a long lead time is inevitable for an initiative which aims to create robust and reliable systems, to engage with and secure the support of a wide range of stakeholders and to deal with complex political and technical issues. Progress varies between countries but there are many encouraging developments.

A successfully implemented VPA authorises a country to start FLEGT-licensing and a licence is an assurance that the wood it exports to the EU is legally sourced. VPAs also support the partner country in combatting illegal logging by improving forest regulation and governance. VPA negotiations and implementation require multi-stakeholder engagement, bringing government, civil society organisations, ENGOs, the trade and others  to the negotiating table.

In November 2016, Indonesia became the first country to complete implementation and start FLEGT licensing its exports to the EU. There are five countries at implementing stage, all in Africa which was an initial focus for the VPA process: Ghana, Cameroon, Liberia, the Congo Republic and Central African Republic. The VPA in Vietnam was “initialled” recently, which means negotiations between EU and Vietnamese authorities are complete and it is progressing to ratifying and preparing implementation of its VPA. Another eight countries are currently negotiating a VPA with the EU: the Democratic Republic of the Congo, Ivory Coast, Gabon, Guyana, Honduras, Lao PDR, Malaysia and Thailand. In addition, the EU is engaged in dialogues to inform and prepare possible VPA negotiations with Myanmar, Cambodia and the Philippines.

Cambodia and the EU are engaged in FLEGT-related regional dialogues.

The focus of VPA implementation has been on enabling legislation relating to the timber legality assurance system (TLAS) and on setting up the TLAS system itself. Civil society has focused on implementing the transparency annex and on strengthening their capacity to do independent observation of forest governance. The pace of VPA implementation in Cameroon has slowed in recent years, in spite of sustained support from civil society and private sector stakeholders. A key challenge in implementing the TLAS is setting up the web-based information system (SIGIF2), a second generation of the national timber traceability tool. Once established, the SIGIF 2 still needs to be completed and rolled out nationally.

The Central African Republic is at initial stages of VPA implementation; the process is gradually restarting after the 2013 crisis. Key actors still support the VPA but their  knowledge has decreased. However, there are positive developments: an assessment of the forestry sector and stakeholders has provided a basis for developing a road map for implementation and EC aid projects. The FAO FLEGT programme has resumed technical support that has improved transparency through a central database on forest and the website www.apvrca.org in accordance with the requirement of the Agreement. However, conflict persisting outside Bangui, weak capacities and a lack of domestic resources make VPA implementation a challenge.

VPA negotiations with DRC have stalled since November 2013, although some progress at national stakeholders’ level – including work on updating legality grids – has been noted in 2016 and 2017. In general, stakeholders in DRC are more focused on REDD, legal reforms and economic issues than on the VPA process. Moving forward, the EC is planning to restructure FLEGT working groups and work not only on VPA specific issues, but participate in developing a national forest policy.

The last session of VPA negotiations between the EU and Gabon was held in October 2011; the process has since been stalled. However, technical sessions involving Gabonese stakeholders were relaunched in 2015 and 2016 and the VPA process has enabled stakeholders to come together and work on the forest law reform process. A new forest code is said to be soon approved. This might help build a new dynamic for forest governance in the country and possibly lead to a new renewed dialogue with the EU, including around VPA negotiations.

Ghana is closest to finalising VPA implementation among all current implementing countries. A shipment test of FLEGT-licensed timber was initiated in September 2017 and the readiness assessment for licensing is planned to take place in 2018. New legislation to regulate conversion of timber harvesting permits to Timber Utilisation Contracts is being implemented.

VPA negotiations in Guyana are well underway. The country’s timber legality assurance system has been field-tested in June 2017, meaning that stakeholders were given the opportunity to assess the practicality and credibility of the VPA’s legality definition and legality verification procedures, as well as the readiness of government agencies to implement the Guyana timber legality assurance system. Technical work on the VPA in Guyana is being finalised. Once technical work is done and political agreement reached, the VPA can be initialled, which would mark the official end of negotiations. The VPA process in Guyana also faces a number of challenges including maintaining momentum and commitment and ensuring continued stakeholder participation as well as support to Amerindian land issues.

Technical work on VPA texts in Honduras is being finalised. Once the technical work is done, the VPA can be initialled, which would mark the official end of negotiations. Stakeholder engagement in Honduras is high, with a remarkably wide participation. Hopes are that this high level of momentum can be maintained and VPA implementation begins as soon as the Agreement is initialled. Main challenges facing VPA implementation in Honduras include regularisation of land tenure, informality of the SME sector and institutional capacities.

Indonesia completed implementation of the VPA and the underlying legality assurance system SVLK in 2016; the first FLEGT licenses were issued on 15 November 2016. Full VPA implementation means that besides the national rollout of SVLK certification, Indonesia has structures in place to issue FLEGT licenses as well as manage, monitor and evaluate the system. Monitoring and evaluation means that, although the VPA is fully implemented as it was negotiated with the EU, continuing multi-stakeholder processes ensure the system is working as envisaged. Moreover, monitoring and evaluation programmes propose improvements regarding the implementation and future development of the VPA.

VPA negotiations in Ivory Coast are progressing slowly, due in part to a lack of national vision for the forest sector and conflicting sectoral policies. The last round of VPA negotiations was held in June 2014. In March 2017, the Ivory Coast updated its VPA Roadmap and has been making steady progress in implementing it. In addition, government has taken steps to harmonize agricultural and forest policy for a coherent forest policy.  Spurred by a letter from the primary donors (GIZ, AFD, FAO, UE) to support the development of a national vision for forests and a recent NGO exposé on the illegal origins of chocolate grown in forests, in September the Prime Minister proposed a pragmatic forest policy. The policy has the potential to more coherently govern the sectoral activities that take place in the forests. The forest code and regulations will be revised in light of the new policy and in the meantime, the EC is developing an approach for a stock take exercise to identify the most appropriate course of action for forest-related activity in Ivory Coast.

The first VPA negotiation session in Lao PDR was held in April 2017. There is a strong political commitment to the VPA process in the country and synergies exist between the FLEGT process and an order to improve forest governance and fight deforestation issued by the Prime Minister (PM order No. 15). Initial discussions on the timber legality definition and product scope are ongoing. Major challenges facing the VPA process in Lao PDR include forest conversion, capacity limitations, and limited direct trade with the EU.

VPA implementation in Liberia is progressing. The LAS has been developed and verification is being implemented in a more systematic way. The EC is also noting improvements in transparency, with relevant documents being made available at www.fda.gov.lr. Institutional and technical capacities remain the main challenge for Liberia to tackle before the VPA TLAS is fully operational.

Malaysia has been negotiating a VPA with the EU since 2007. The timber legality assurance system has mostly been developed for Peninsular Malaysia and Sabah. However, negotiations have been on hold since 2015 as further movement is not possible without a firm commitment and a defined timeline from Sarawak to be party to the VPA. Nonetheless, technical movements take place in all three regions.

Myanmar is not yet a VPA partner country. However, the country has entered into dialogue with the EU and awareness of FLEGT has increased in the country in recent times. The EU and Myanmar are currently working towards a multi-stakeholder dialogue.

Philippines and the EU are engaged in FLEGT-related regional dialogues.

The Republic of the Congo currently shows positive dynamic and major steps forward towards VPA implementation have been completed. The Timber Legality Assurance Software is starting to be rolled out nationally and the Congo Republic is also working on mechanisms to recognise private forest management certification schemes in the context of their Timber Legality Assurance System. Civil society organisations are actively involved in VPA implementation through Independent Forest Monitoring and participation to legal reform.

The VPA process in Thailand was launched in September 2013. However, first negotiations were only held in June 2017; the process had previously been heavily affected by political turmoil in the country. A national consultation process and work at technical level has been ongoing since 2013, coordinated on technical level by a multi-stakeholder ad-hoc working group. A draft Legality Definition has already been developed and consultations on this are ongoing as well. Major challenges facing the VPA process in Thailand are regulating timber imports as well as smallholders and community forests.

VPA negotiations between the EU and Vietnam were concluded in November 2016. The process of ratification, in parallel to which VPA implementation is already being prepared, is expected to be completed in 2018. The Vietnamese Timber Legality Assurance System (TLAS) will cover all export markets as well as the domestic market. The system will also require Vietnamese timber importers to conduct due diligence for their imports. Due to the diversity and size of the Vietnamese wood industry, VPA implementation is expected to take several years.