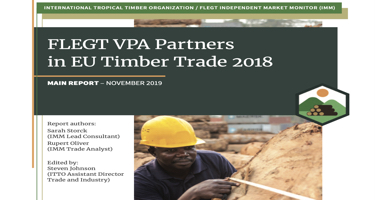 The rise in global trade in 2018 continues the 2017 rebound from the dip in 2016, which had occurred during a period of slowing growth and the end of the speculative rosewood boom in China. Unlike the 2009 to 2014 period, when rapid trade growth was driven largely by China’s imports of primary wood products, recent growth is mainly due to rising wood furniture exports, notably from Viet Nam and India destined for the United States. The year 2018 also saw a big rise in the value of the tropical plywood trade, particularly from Indonesia destined for the US, Japan, South Korea, the EU, and Australia. Exports from the Congo region of Africa increased 17%, while exports from East and West Africa declined.

In the EU, timber market prospects deteriorated again in 2018, after a positive development in 2017. The pace of GDP and construction sector growth slowed, while activity in the wood product manufacturing sectors levelled off after trending upwards the previous year. During 2018, there was some evidence of wood regaining a little of the share lost to substitute materials in recent years, although the competitive pressure from these alternatives was still intense.

The major beneficiaries of a significant rise in EU imports in 2018 were other European suppliers, notably Russia, Ukraine and Belarus. The share of VPA partner suppliers in total EU imports continued to decline in 2018, although at a slower pace than in the past. In 2018 China’s share in EU imports fell to the lowest level since 2007.

Overall EU timber trade with VPA partner countries fell in 2018. However, imports from Indonesia, all covered by FLEGT Licences since 15 November 2016, increased slightly, by 0.1%, to €815 million in 2018. There was a notable rise in imports of doors and plywood from Indonesia during the year. There was also a rebound in imports of sawn wood and logs from VPA implementing countries in Africa in 2018. EU imports of wood furniture, flooring and glulam from VPA partners in Asia continued to slide.

IMM surveys of trader opinion in 2018 identified the drivers of the lasting downturn of EU consumption of wood products from VPA partner countries including “substitution by other materials”, the main driver, followed by the “economic downturn 2008-2013” and “diversion of supply to other markets”, closely linked to “competition from China for material access and in markets for finished goods”. “Environmental prejudice and uncoordinated marketing” was ranked by respondents as the fourth most important driver.

Nearly all respondents to the IMM EU trade surveys in 2018 said that FLEGT-licensing was making importing wood products from Indonesia easier compared to EUTR due diligence. The IMM 2018 survey of traders in Indonesia also confirmed a high overall level of support, with more than 90% of respondents still fully (56%) or partially (38%) confirming that achieving SVLK certification was beneficial to their operations.

Despite 40% of EU respondents stating, in the IMM 2017 trade survey, that they would be willing to pay small price premiums for FLEGT-licensed timber, the 2018 survey indicates that in practice no such premiums are being paid. The perception amongst many importers that licensing is no more than an assurance of “legality”, which is expected anyway, continues to limit willingness to pay market premiums. Some suggested that price premiums might be an option in the future, once FLEGT licensing and its wider benefits are better understood.

Overall the data indicates that FLEGT licensing has had little impact on the market share of Indonesian products in the EU and has not overridden the on-going effects or direction of larger economic trends. Equally, licensing does not seem to have had any detrimental effect on import share.

The 2018 report provides an update on market constraints to FLEGT-licensed timber identified in the 2017 report. The number of both HS code and other FLEGT Licence mismatches related, for example, to shipments’ weight or volume has been reduced in 2018 and there has also been progress to introduce e-licensing, with plans to pilot a tool and make a final decision in 2020. Several organisations stepped up their communication and marketing of FLEGT Licences in the EU during 2018, but FLEGT’s profile is still low compared to forest certification initiatives such as FSC and PEFC.

The report finds that acceptance of FLEGT Licences (or equivalent documents issued by FLEGT licensing VPA partner countries for exports to non-EU countries) as evidence of legality in non-EU countries has potential to provide new opportunities for market development, which are more significant against the background of the EU’s falling share in VPA partner exports and the emergence of other dominant consumer markets and processing hubs, notably China and Viet Nam.

While there has been a shift in EU trade towards supply regions with higher identifiable access to various forms of legality verification, there are continuing high levels of EU import from countries and regions with low access, notably China and India, raising questions relating to the forms and credibility of legality assurances being offered by suppliers in these regions. IMM survey data suggests that much of this may be covered by third party legality verification systems operated by individual certification companies and agencies, but there is no centralised and consistent data published on these systems, either relating to the standards used, the operators covered, or the costs involved.

Analysis of data on trade flows, access to certification, and feedback from IMM surveys suggests that the challenges of obtaining reliable legality assurances has been a contributory factor behind the decline in tropical timber’s share of the EU market. It also highlights that FLEGT licensing has a critical role to play in helping to reverse this trend, particularly for suppliers in Africa and South East Asia. Furthermore, the FLEGT licensing process may be particularly beneficial for smaller operators that have struggled to engage in private sector certification systems.

There may also be strong opportunities created by the FLEGT and third party certification initiatives working more closely together, a fact increasingly recognised by stakeholders involved in both initiatives, to help simplify verification, reduce the bureaucratic burden, limit duplication, improve cost effectiveness, improve market access, and prevent unnecessary competition between systems. An immediate market issue, that can only be resolved through closer dialogue, is that the FSC Controlled Wood National Risk Assessment for Indonesia does not acknowledge FLEGT-licensed wood as “low risk“ on the FSC legality criteria with significant potential to cause market confusion in the EU (where around 20,000 companies hold FSC chain of custody certificates). Ultimately, if the aspiration of VPA partner countries is to achieve market recognition for TLAS timber products beyond regulatory compliance to EUTR and other consumer country laws, the most efficient way to achieve this may be to find an accommodation with PEFC or FSC.

The report concludes with a series of recommendations to build on the market opportunities presented by FLEGT licenses and to help overcome existing market constraints.