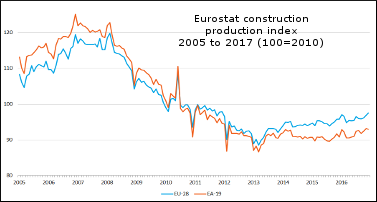 EU gets back to building

European construction is a key market for many European timber businesses so, as it  was among the sectors hit hardest and longest by the international economic downturn, they suffered accordingly.  Some companies reported seeing their sales to builders drop by 80% during the downturn which began a decade ago. In Spain, where the building industry suffered in the recession more than most, it shed 1.5 million out of 2.5 million workers. Elsewhere there was also dramatic slowdown and loss of capacity. But today, according to the European Construction Industry Federation (FIEC), the sector is slowly but surely getting back to growth.

To maintain this momentum, according to market forecaster Euroconstruct, requires more public investment, which is currently improving “only marginally and only in some countries”.  At the same time it says there is  “an interesting window of opportunity for construction, created by a combination of cheap credit and a more favourable perception of building as an investment shelter”.

The organisation expects residential building to continue to be the best performer and to maintain its “sharp growth trajectory”.  Non-residential is forecast to remain slow, but civil engineering and infrastructure projects are reported as starting to accelerate this year.

The pace of recovery has naturally varied between countries, in some cases widely so. But various sources say that broadly northern and mid-European countries construction markets have fared better, although southern economies   have now mostly returned to growth.

Among the top performers has been Germany. According to the Hauptverband der Deutschen Bauindustrie (HBD), its construction output was up 6.3% last year, 0.5% above forecast. Housing was the main driver, but all building sectors saw strong activity.  And the robust performance continues this year, with the HBD expecting a further 5% growth– monthly new orders in August rose at the fastest rate on record.

The French construction sector is also recuperating from the downturn. In fact, according to European construction equipment sector body CISMA, 2017 will be its busiest year since 2010, with a forecast of up to 410,000 new dwellings to be built, representing 4% growth.  Other construction sectors are also on an upward curve, putting growth for the whole new build industry this year at 7%. The renovation industry is improving more slowly, but even taking this into account, still gives total building activity a growth figure of 3.5% against 1.9% last year.

In the Netherlands construction turnover grew 6.3% in the second quarter, marking the eleventh successive quarterly increase. A combination of rising population and the economic crisis has left the country facing a housing shortage of around 178,000, but the industry is rapidly building capacity and new dwellings are expected to start exceeding the number of additional households in 2019.

Belgium too is finally enjoying a building upturn, but it seems to have slowed this year. After dipping from 25,553 in 2014 to 21,916 in 2015, the number of new residential buildings constructed started to rise again in 2016, reaching 23,106. That equated to 51,654 dwellings, compared to 46,181 the year before. With other construction work, this resulted in an annual overall industry growth figure of 3.5%. Commentators are expecting continued expansion this year, but only about 1%.

The UK is another country where building seems to have lost momentum. The country’s actual housing  requirement is put at around 250,000,but last year it only recorded 153,370 housing starts – and that was a 5% increase on 2015 and a nine year high. This year growth accelerated in the first quarter, with year on year housing starts to the end of June at 164,960.  However, new build housing shrank in the second quarter by 0.5% and by 0.7%, in the third, technically putting the sector back into recession.

Commentators point out that the industry is volatile, and could bounce back from this dip, but next year overall UK construction is expected to remain flat and there is uncertainty further ahead.

A particular concern surrounds Brexit and the industry’s dependence on citizens from the rest of the EU for its workforce. Some have predicted that construction could lose up to 175,000 workers if the UK and EU do not strike a Brexit deal including continued free movement of labour.

The picture from the construction sector in Italy, where house building contracted by 35% between 2007 and 2015, is also less positive and the outlook less clear. According to the Istat index, construction output remains volatile, with the first quarter down 1.2% on 2016.  However, construction investment was earlier forecast to grow 0.8% this year, the housing refurbishment market is growing, and recovery is reported in the real estate sector, particularly housing.  After falling 600,000 in the recession, the construction workforce also rose 0.6% in the first quarter.

Following its catastrophic downturn, Spain’s construction industry output remains only half what it was ten years ago.  However, it is now back to growth, with overall activity growing 5% in 2015 and 2016 and the same expansion expected this year, taking the number of housing starts to around 67,000.  And the upturn is expected to continue, with Solvia, the property division of Sabadell Bank forecasting starts to hit 110,000 in 2020. The country still has around 3.4 million   houses lying empty since the recession, which continues to restrain growth, but housing transactions are expected to rise to 550,000 next year.