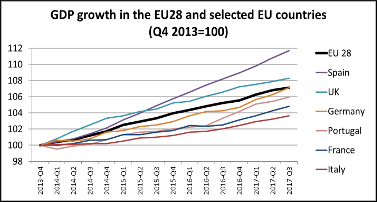 The EU timber sector is being buoyed by broadly resurgent economic conditions, with the UK the only major standout from an increasingly positive trading consensus due to growing concerns about the effect on business and consumer sentiment of Brexit negotiations.

The London Financial Times (FT) newspaper recently described the recovery of the Eurozone as the ‘surprise economic story of 2017’.

Earlier in the year, it said, economists had expected the USA to be the best performing ‘advanced’ economy.  But in the first quarter, the Eurozone grew twice as fast as its transatlantic rival.

Commentators also maintained that this recovery was not a temporary bounce, but set on increasingly firm foundations, with most countries enjoying the upturn.

“The dispersion of Eurozone growth rates across both countries and sectors is at its lowest level in two decades, reflecting a convergence of rates around higher levels,”  said European Central Bank (ECB) Chief Economist Peter Praet. He also described the Eurozone upswing as “increasingly solid” and showing “remarkable resilience to external shocks”.

This view is borne out by latest figures from economic analysis and forecast provider FocusEconomics.  It commented that the strength of the Euro may increasingly impede Eurozone exports, with the trade surplus narrowing more than expected in July. But against this, economic sentiment, assessed on a range of criteria, hit a ten-year high in August and the region’s composite purchase management index increased again in September.

Looking at the individual Eurozone economies covered by the IMM Project’s latest market reports, Germany saw its own and European market confidence take a temporary dip after its September election, when Angela Merkel retained the Chancellorship, but without a ringing endorsement from voters, forcing her to find new coalition partners. However, the election result is not expected to have long term impact on Germany’s economic performance, given its strong fundamentals. Underlying business and consumer confidence is high and industrial production, construction and retail sales robust.

In August the country’s trade surplus widened to €21.6 billion, while industrial production increased 2.6% and inflation remained steady. Latest EU forecasts reflect the general consensus, predicting 1.6% GDP growth for 2017, rising to 1.9% in 2018, with unemployment falling to 3.9%.

Italy’s growth remains relatively weak, with static productivity levels and public debt continuing to rise at the last report in July.  But quarter two this year was the third consecutive quarter of expansion, and the first two months of quarter three show momentum building. 2017 is also expected to be the country’s third year of growth, with forecasts for GDP ranging from +1% to 1.4%, following 2016’s 0.7%. Consumer and business confidence was reported up in August and manufacturing PMI were at their strongest in six years thanks to higher orders and a 1.2% rise in industrial output.  The ailing Italian bank system also saw its bad debt stock hit its lowest level since 2014 in July.  GDP growth in 2018 is expected to be 1.3%

Signs are that Spain’s economic momentum may have started to slow, with industrial output and retail sales growth dipping in July and employment growth also decelerating.  But it still remains among the best performing European economies, with growth this year forecast at 3.1%   following last year’s 3.2%.

Political events in Catalonia are giving pause for thought, but next year forecasters predict growth of 2.6%, with still rising employment driving consumption, the property and construction markets continuing to recover, and exporters benefiting from relatively low and static labour costs.

The Netherlands economy is described by media and market analysts as ‘booming’. It grew at its fastest rate for 20 years in quarter two 2017 and for the year as a whole analysts expect GDP to increase by between 2.8% and 3%.  Foundations for the upward trend are rising exports and falling unemployment and consequent business and consumer confidence, with the latter firing rising private consumption and an accelerating housing market. Property transactions have increased rapidly, despite rising prices, and construction is cited as one of the fastest expanding sectors, with housing starts last year around 50,000. Next year GDP growth is expected to be 2.5%.

Figures for quarter two show Belgian growth slowing. However, analysts predict that low interest rates and domestic consumption, rising on the back of the highest consumer confidence levels since 2001, should result in annual growth of 1.6% this year. Rising wages and higher investment spending are adding to economic momentum, while expansionary fiscal measures are expected to provide a further boost in to 2018. Construction growth of 3.5% in 2016 is expected to slow to just 1% this year. But even so, next year the economy is expected to grow another 1.6%, followed by around 1.5% in 2019.

Meanwhile, as the Eurozone forges ahead, the British Chambers of Commerce (BCC) said the UK economy was now on a “low growth trajectory”. Latest figures show third quarter 2017 growth ahead of expectations at 0.4%, supporting forecasts of an annual growth figure of 1.6% and triggering the recent interest rate rise. But in its latest economic review, the BCC revised its growth forecast for 2018 UK downward, from 1.3% to 1.2%,  and for 2019   from 1.5% to 1.4%.  It said that the post EU referendum slide in the value of the pound had “done more harm than good” as the rising cost of imported raw materials had driven inflation, which was now expected to hit 3% by the year end, suppressing consumer spending.

Uncertainty over Brexit and the UK’s subsequent trade deal with the EU is cited as a key factor in the deceleration of the economy, with Commerzbank commenting that it was running at 0.5% slower growth than before the EU referendum.

Construction had been on an upward curve, with housing starts in the year to June  up 13% at 164,960. But the industry contracted in 2017 quarters two and three and the forecasts for growth in 2018 have been downgraded to under 1%.

Various industry bodies have now urged government to achieve rapid conclusion of a transition deal with the EU on Brexit to help lift the economy.

In the meantime, credit rating agency Moody’s has downgraded the UK’s rating from Aa1 to Aa2. In October the International Monetary Fund also revised down long-term and short-term UK growth forecasts in response to ‘negative effects’ from the Brexit vote starting to show. It now predicts the economy will expand 1.7% this year and 1.5% next. Over the next five years it expects growth of 10.3%, which compares with 11.5% for the Greek economy.