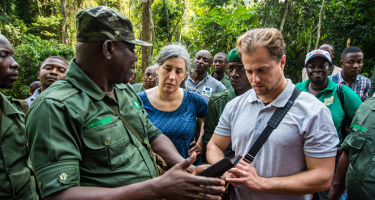 The majority of respondents to a recent IMM survey of the Ghanaian timber industry fully or partially agree that the FLEGT VPA process is helping to improve forest management and governance in the country. They also agree thay it is helping to control illegal chainsaw milling and having a positive effect on implementation of laws concerning the payment of fees for the use of forest resources. However there is some variation in attitudes to the VPA process between larger and smaller companies.

The majority of respondents to the IMM survey also assume that Ghana will gain a competitive advantage once the VPA is fully implemented.

Large exporting companies said that one of the benefits of VPA implementation would be that illegal timber industry operations, which currently have a negative impact on prices, would have to shut down. Moreover, VPA implementation would give them access to tools for sustainable forest management, such as forest management plans, and preferential access to EU markets for specialized and high value products.

Partly for the same reasons, smaller companies and informal enterprises are more sceptical about the VPA, which is expected to cut off some sources of timber supply. These companies are not convinced that there will be enough legal – and affordable – timber for them to use once the VPA is fully implemented.

Key responses to the Ghana timber industry survey are shown in Figure 1.

Figure 1. Please indicate your opinion on the following statements by ticking the appropriate boxes: 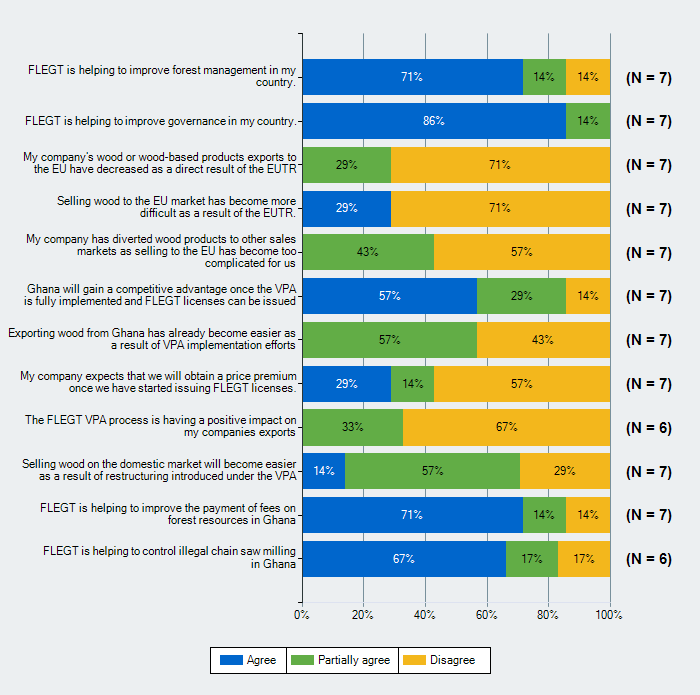 The informal sector makes up a large part of Ghana’s timber industry and provides almost half of the roughly 100,000 timber-industry jobs (Figure 2). The timber industry overall contributes significantly to the Ghanaian economy. It is the fourth largest earner of foreign currencies after gold, cocoa and tourism, generates 4-6% of Ghana’s GDP and 10% of its export earnings.

The majority of Ghanaian government agencies interviewed as a part of a separate IMM survey said they are expecting a positive impact from VPA implementation on forest revenue mobilization, forest management and governance, domestic market structure, and forest business transparency and accountability. Most also agreed that the VPA, once fully and consistently implemented, will help to control illegal logging. Some respondents saw a certain risk for inconsistent enforcement of VPA provisions by FC officials and other agencies. Insufficient timber supply from legal sources for the domestic market is considered to be another risk factor. The country has intensified forest plantation development and reforestation to ensure sufficient timber supply from legal sources in the future.

IMM also surveyed Civil Society Organisations (CSOs) and other NGOs about their opinion of the VPA process in Ghana. The majority of these organizations expect that the VPA will improve forest governance, help to contro lillegal logging and bring about domestic market reform. However, CSOs believe that the process of awarding harvesting contracts still lacks transparency and called for improvements in this area.

CSOs have been actively involved in negotiating the VPA and in building civil society understanding of the legality assurance system. They are now also involved in creating monitoring processes to ensure credibility of the VPA as well as transparency of processes and measure the impact of VPA implementation on forest governance, forest management, forest condition, market performance, revenue generation, and livelihoods. CSOs are also participating as observers in audits to ensure transparency and suggest improvements.