The 2021 IMM EU trade survey demonstrates that, after five years of FLEGT licensing, the level of awareness of the Indonesian FLEGT licensing system has reached a satisfactory level in key EU markets, with a large majority of respondents being aware also of some of the finer details of what VPA implementation in the country has meant (figure 1). 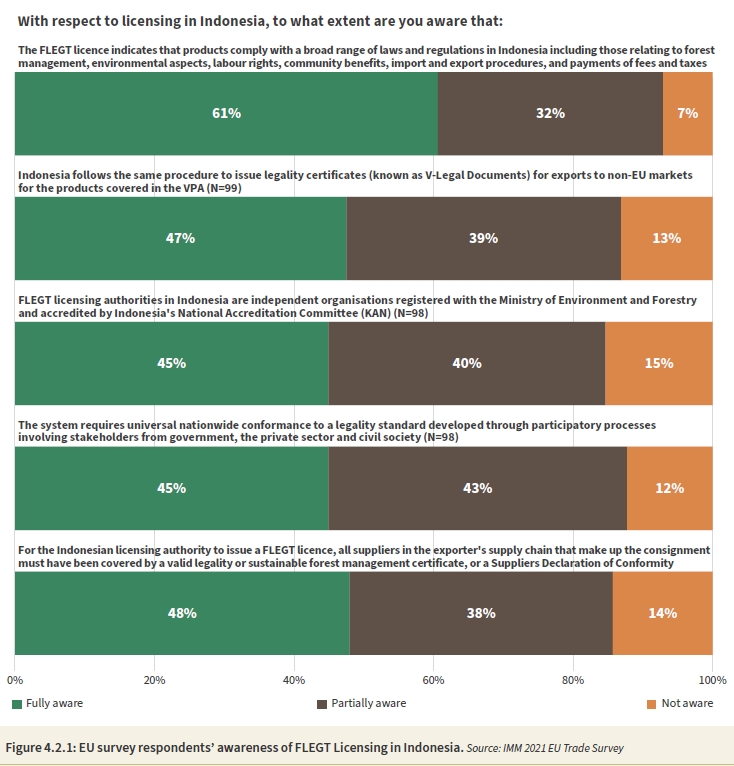 Moreover, a large majority – more than 70% of respondents in each case – rated the administrative procedures involved in importing FLEGT-licensed timber as “easily manageable and understandable” and agreed that FLEGT Licenses were making importing wood from Indonesia easier compared to EUTR Due Diligence.

A majority also stated that teething problems, such as HS Code or other Licence mismatches had been resolved, with only 10% of respondents still reporting issues. As in 2020, most unsatisfied respondents in terms of authorities’ dealing with Licence issues were based in Belgium and the Netherlands.

As in previous surveys, a majority of respondents to the 2021 survey stated that, where possible, i.e. where other criteria such as price, quality, availability and transport are equal, they would give preference to FLEGT-licensed timber over competing unlicensed timber products. Respondents explained that they would give preference to FLEGT- licensed timber as it reduced their own risk of infringing the EUTR to zero and because administrative procedures were less time-consuming and costly than exercising EUTR Due Diligence. One or two respondents also said they were actively promoting FLEGT-licensed timber to their customers for these reasons.

The main reasons given by respondents for preferring certified timber were either company procurement policies and standards, the lack of chain-of-custody of FLEGT-licensed timber after arrival in the EU, or customer requirements. The latter were attributed primarily to marketing as well as strong end-consumer and public procurement specialists’ awareness of the two main certification schemes. In reputedly more environmentally sensitive EU markets, in particular the Netherlands, certification was now considered a minimum requirement by many customers, said respondents. In some countries this includes key retailers, DIY stores and even supermarket chains that require certification for all traded timber and timber products.

Some respondents believed that FLEGT licensing could benefit from this trend alongside certification, but this would require active and consistent communication of contributions towards sustainability and climate change mitigation in FLEGT licensing countries. It would also require broader availability of FLEGT-licensed timber products from more than the current one FLEGT licensing supplier country, i.e. Indonesia. With broader product availability and data-backed reassurance of the wider benefits of FLEGT Licensing, more companies – and countries – might include FLEGT in their procurement policies and more might give it a larger role than just verification of legality.

22% of respondents said that they were importing more timber and timber products from Indonesia now than they had before the beginning of FLEGT licensing. There was a broad consensus among survey respondents that since the beginning of the COVID pandemic and the unprecedented market situation that arose as a result, FLEGT licensing has played practically no role in purchasing decisions. Other factors, such as the limitations of supply across all product ranges and the above-mentioned trends in freight costs and product prices were dominant throughout that period.

Several respondents reported good demand in Europe for Indonesian timber products during 2021. However, production and availability were much reduced by lockdowns. And even where material was available some companies were reluctant to buy, as Indonesia was more severely affected by the spike in sea freight rates than other supplier countries.

Limited availability and uncompetitive shipping conditions had also been quoted by IMM survey respondents as reasons for not increasing procurement in Indonesia before the COVID pandemic.