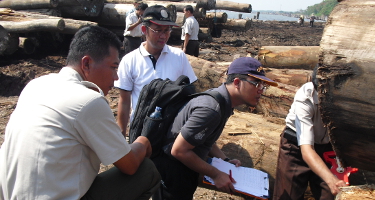 The first round of IMM surveys in Indonesia, the only VPA partner country currently issuing FLEGT licenses, covered 47 timber industry players exporting a wide range of products – including furniture and furniture parts, decking, mouldings and plywood as well as paper, fibre- and particleboard, doors, gluelam and sawn timber – to the European Union and world-wide. Companies were surveyed about their main European export markets and the overall relevance of Europe as a sales market as well as their perception of the VPA process, FLEGT licensing and the EUTR.

Figure 1
Please indicate your opinion on the following statements by ticking the appropriate boxes: 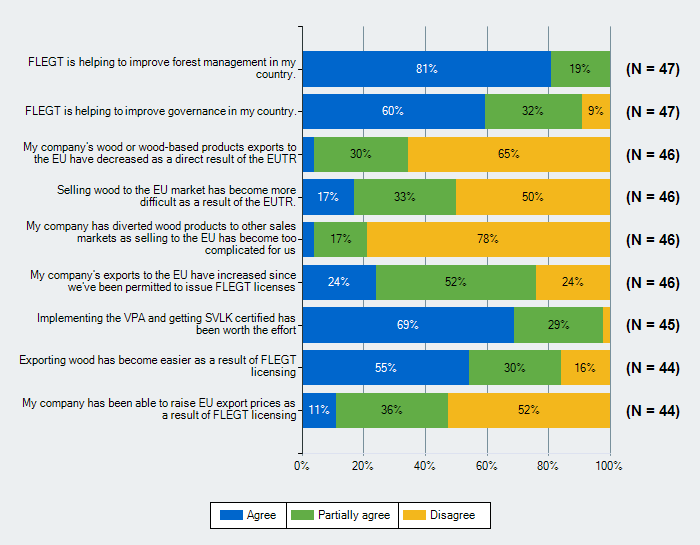 When it comes to assessing the impacts of the EUTR, only 5% of respondents stated that their exports to the EU had definitely decreased as a direct result of the EUTR. Another 30% partially agreed with this statement, whereas 65% of respondents didn’t think the EUTR had had any direct impact on their export sales to the EU. 5% of the survey respondents also stated they had diverted products to other sales markets, as selling to the EU had become to complicated after the EUTR had entered into force. Another 17% of respondents partially agreed to this statement, while 78% did not divert products to other sales markets because of the EUTR.

The relative ease with which Indonesian companies seem to have been able to respond to the challenge of providing European customers with meaningful documentation to comply with the EUTR and the limited impact the EUTR has had on Indonesian sales to the EU can at least partly be attributed to VPA implementation: Many companies in Indonesia have been SVLK certified for a while and V-Legal documents, which were frequently considered as something similar to a FLEGT-license, were issued from 2013.

VPA covers all exports from Indonesia

The Indonesian VPA provides for all exports, not just those to the EU, to comply with the national timber legality assurance system (SVLK). Exports to the European Union have been accompanied by FLEGT licenses since November 2016. Exports to other international destinations continue to be accompanied by V-Legal documents, which were introduced in 2013 and, like FLEGT licenses, are issued and controlled by the Licensing Information Unit (LIU).

Information on the number of FLEGT licenses and V-Legal documents issued between January and September 2017 (Figure 2) shows how important the global coverage of VPA legality requirements is: the EU, while still an important market, is not the primary destination for Indonesian wood products (for more details on Indonesia’s wood and forest products trade with the EU).

In spite of the positive overall attitudes and perceptions shown by most IMM survey respondents, Indonesian trade representative and government agencies also expressed some concerns and criticism of FLEGT licensing and their experience with the system.

One point mentioned by both some Indonesian IMM survey respondents and Indonesian trade representatives on occasion of international conferences was that no perceptible increase in Indonesian sales to Europe had materialised immediately after the beginning of FLEGT licensing. While this is true, it is also still very early in the day to analyse impacts of FLEGT licensing on timber exports. Indonesian wood product exports to the EU have shown a stable overall development this year so far.

Disappointment in FLEGT licensing as an immediate means to boost demand can primarily be attributed to exaggerated expectations: FLEGT-licensing in isolation cannot hope to create any major surge in demand. The zero-risk status of Indonesian timber is certainly an incentive for European operators and most companies told IMM they would give preference to FLEGT-licensed timber over unlicensed timber from competing sources. However, other commercial factors such as price, product range, logistics and lead times, interest rates as well as bureaucracy and investment climate play an important role as well.

IMM analysed various indices of international competitiveness for its report “FLEGT VPA Partners in EU Timber Trade 2014 to 2016” and results suggest that Indonesian exporters face challenges in some of these wider market issues. Interviews with European importers conducted as a part of the IMM 2017 European trade survey confirm this assessment.

However, many other European survey respondents said they found the process of importing FLEGT-licensed timber straightforward and easy to follow once they had gotten used to it. Problems such as delays in releasing shipments on the European market or in isolated cases higher than accustomed import taxes were mostly attributed to license mismatches rather than generally complicated procedures.

Importing FLEGT-licensed timber into the EU requires the importer to register each license – either on national systems or the European FLEGIT system. In a second step, the relevant Competent Authority verifies and approves the license. Competent Authorities are checking the signature and other properties of each license and can also verify the validity of a license by looking it up on the Indonesian SILK system.

“FLEGT-licensed wood should be accepted by European public procurement schemes”

Procurement experts from EU Member States say the main difficulty with regards to FLEGT-licensed timber would be traceability of licensed timber once it has entered the EU market, as there is no chain-of-custody system in place. Some solutions, including requesting information roughly in line with what is required within Dutch Category B-evidence (broken chain-of-custody), are currently being discussed.

Besides acceptance in public procurement, Indonesian stakeholders also called for enhanced communication on and promotion of FLEGT licensed timber by European partners. At the same time, Indonesian producers have also advanced proposals for a new FLEGT Certified logo. IMM will publish more detail on this shortly.