Interview with Indonesia Director of Forest Products Processing and Marketing 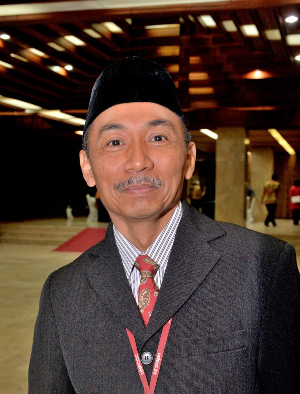 “EC should do more to promote FLEGT-licensed timber”

In November 2016, Indonesia started issuing FLEGT licenses which are recognised proof of legality in the EU market and thereby became the first country to fully implement a Voluntary Partnership Agreement (VPA) with the EU. Dr Rufi’ie, Director of Forest Products Processing and Marketing with the Indonesian Ministry of Environment and Forestry, is responsible for daily implementation of the Indonesian Timber Legality Assurance System (Sistem Verifikasi Legalitas Kayu/SVLK) which the VPA is based on. In an interview with IMM, Dr Rufi’ie talks about Indonesia’s motivation for entering into a VPA, challenges met on the way and first experiences with FLEGT-licensed timber.

IMM: What were the main incentives for Indonesia to enter into VPA negotiations with the EU?

Dr Rufi’ie: Illegal logging and trade in illegal timber can only be effectively combated through joint efforts between producer and consumer countries. The EU has developed the concept of FLEGT-VPAs to demonstrate its commitment to fighting illegal timber and by entering into the VPA process Indonesia decided to share this burden. Indonesia wanted to tackle challenges it faced in forest governance and has successfully done so through implementation of the VPA. The implementation of the VPA has also helped to reposition Indonesian wood products in the global market: instead of being suspected of trading in illegal timber, Indonesia is now recognised as a pioneer of providing legally and sustainably sourced tropical timber.

IMM: What were the greatest challenges in VPA implementation and how did Indonesia meet them?

Dr Rufi’ie: Implementing a VPA means bringing a large variety of stakeholders with different interests to the table and reconciling those interests wasn’t always easy. Where industry is concerned, small and medium-sized enterprises (SME) often found SVLK certification a challenge, given their limited capacities and resources. The Indonesian government has responded to this by providing financial and technical assistance to smaller companies.

IMM: Which ministries and government agencies are involved in VPA implementation, operating the FLEGT-licensing scheme and timber marketing/promotion and what are their respective roles/tasks?

IMM: Indonesia has issued FLEGT-licenses for a year now. What were the main challenges encountered during this period?

Dr Rufi’ie: There has been no transition period and therefore some issues have come up, especially where SMEs in Indonesia and Competent Authorities in the importing countries are concerned. For example, FLEGT licensing has drawn attention to the fact that EU countries and Indonesia are not always using the same HS Codes for wood products. The resultant discrepancies between some FLEGT licenses and European customs declarations have sometimes led to delays in processing of shipments. Indonesia and the European partners are working together to deal with this issue. Indonesia has informed exporters and Europe importers that they should agree on an HS Code to be used with their trading partners before FLEGT license applications and customs declarations are submitted, for example. Another issue was that European customs authorities came across FLEGT licenses that did not match the actual shipments. This happened especially in the early stage of FLEGT licensing. The reason for this is that there is a time lag between application for a FLEGT license and the actual shipment of cargo. Sometimes more and more often less product can be fitted into a container than anticipated at the time of license application and in some cases companies fail to inform the licensing authority and apply for a new license. Indonesian exporters have now been briefed accordingly and this should be happening less often. A third issue was purely formal: some paper-based licenses had been printed on the wrong type of paper. Close cooperation between Indonesia, the EC and Competent Authorities in EU Member States is essential for addressing these challenges.

IMM: From your perspective, what are the main advantages the VPA process and the introduction of the SVLK has brought for Indonesia?

Dr Rufi’ie: The main benefit of the VPA is of course the green lane for SVLK-certified products. However, the progressive improvements in forest governance in Indonesia are also a major advantage.

IMM: Are there any areas in which you would wish for more support from European partners and if yes, what could this support look like?

Dr Rufi’ie: While FLEGT licenses are a passport for Indonesian timber to enter the EU market without due diligence this does not necessarily mean that all EU consumers are accepting it. From our perspective, the EC should put more effort behind informing EU consumers about VPAs and FLEGT licensing. It should also promote the use of FLEGT-licensed timber in public procurement more actively. We are also hoping that the EU will step up efforts to ensure consistent implementation and enforcement of the EUTR. We believe that capacities in some EU countries are still insufficient to ensure effective implementation of the Regulation.

IMM: Is there any specific piece of advice you would like to give other VPA implementing countries?