Italy has been condemned for its continued import of Myanmar teak in alleged breach of the European Timber Regulation (EUTR) by NGO the Environmental Investigation Agency (EIA). A previous consensus among the FLEGT/EUTR expert group was that, as governance of the Myanmar forestry sector currently stands, timber cannot be imported into the EU in accordance with the legality requirements of the Regulation. In addition, the EU, the UK, Canada and the US introduced trade sanctions on Myanmar state bodies, including  Myanmar Timber Enterprise (MTE) and the Ministry for Natural Resources, Environment and Conservation (MONREC), following the February 2021 military coup in an effort to cut funds to the new ruling junta.

However, the EIA says that its 18-month investigation into the trade found that 27 Italian importers are still buying Myanmar teak (Tectona grandis). Moreover,  it is claimed the timber is being trafficked through Italy to the rest of Europe. In the report on its trade probe, ‘The Italian Job: How Myanmar timber is trafficked through Italy to the rest of Europe despite EU laws’, the EIA say that latest data shows that Italian businesses’ wood product imports from the country were worth €1.3-1.5 million in the three months from March 2021 alone.

The report names companies claimed to be involved in the trade and says it gave them, and the Italian bodies charged with enforcing the EUTR, the Carabinieri Forestali and Ministry of Agriculture, Food and Forestry, the opportunity to respond to the allegations.  Three did so individually, and six collectively. They all rejected the accusations, with their responses included in the 34-page document.

“They stated that they either complied with the EUTR or have had shipments approved by the relevant CA,” says the EIA. “No companies confirmed that they will cease importing teak after the Myanmar  coup and the sanctions imposed on the MTE.”

The report states that Italy has been the EU’s largest importer of timber products from Myanmar since the introduction of the EUTR in 2013. Its dominance of the trade has grown further since European EUTR Competent Authorities (CAs) reached a ‘Common Position’, first stated in 2017, that it was not possible to import timber from Myanmar in compliance with the Regulation.
Following the CA statement, authorities in Belgium and Germany issued specific industry warnings and ‘enforcement actions’ were also taken in the UK, the Netherlands, Denmark and Spain. The Dutch authorities raided six locations to seize 500m3 of Myanmar timber, imported via Slovenia and the Czech Republic, and estimated to be worth $3 million. However, says the EIA, in 2020, Italy’s imports of Myanmar timber imports hit €24 million, or 66% of the EU total.

The EIA investigation took place from January 2018 to 30 October 2020 and looked into 618 shipments of timber, most entering Italy through the ports of Livorno, Trieste and Venice.  The total weight was 12,000 tonnes and value over €60 million.

One of the importers said most of its teak from natural forests was destined for shipbuilding, notably yacht decking and furniture. The report also quotes another saying that plantation teak was not good enough quality for this sector,  ‘even for cruise ships’.

Of the shipments reviewed, 60 were recorded as transiting Italy en route to other EU destinations.

“By allowing  import of Myanmar teak into Italy and then onwards to other EU member states, the failure to enforce the EUTR in Italy is enabling the circumvention of the Regulation,” says the EIA. Importers are also quoted apparently acknowledging that EUTR compliance on Myanmar teak is not possible.

“The findings from our investigation raise very grave questions as to how Italian and, more widely, EU authorities have allowed this trade to continue virtually unchallenged on their watch,” said EIA Forests Campaigns Leader, Faith Doherty on the release of the report. “Various rulings have made it perfectly clear that it is impossible to import teak and other timbers from Myanmar and remain in compliance with the EU Timber Regulation (EUTR), even before sanctions directly targeting the exploitation of Myanmar’s natural resources were put in place earlier this year to reinforce the prohibition – and yet here we are.  Only derisory, minimal fines have ever been imposed and companies have continued to trade despite findings that they are breaching the law.”

She added that there had also been pleas  from the Myanmar population to the international community to curb trade that funds the military regime.
“The EU member states, and in particular Italy, need to stop turning their backs on the people of Myanmar, get serious and put a stop to this shameful situation,” she said.

The EIA’s report recommendations include that:

Increases in imports from Myanmar also in Croatia, Greece and Sweden

Myanmar teak imports in Croatia, Greece and Sweden have also increased since the Common Position was adopted, according to the STIX database, which IMM uses for market analysis (see chart below). Imports to France and Poland remained relatively stable at a low level, while those to Germany, the Netherlands and Belgium have fallen to practically zero. 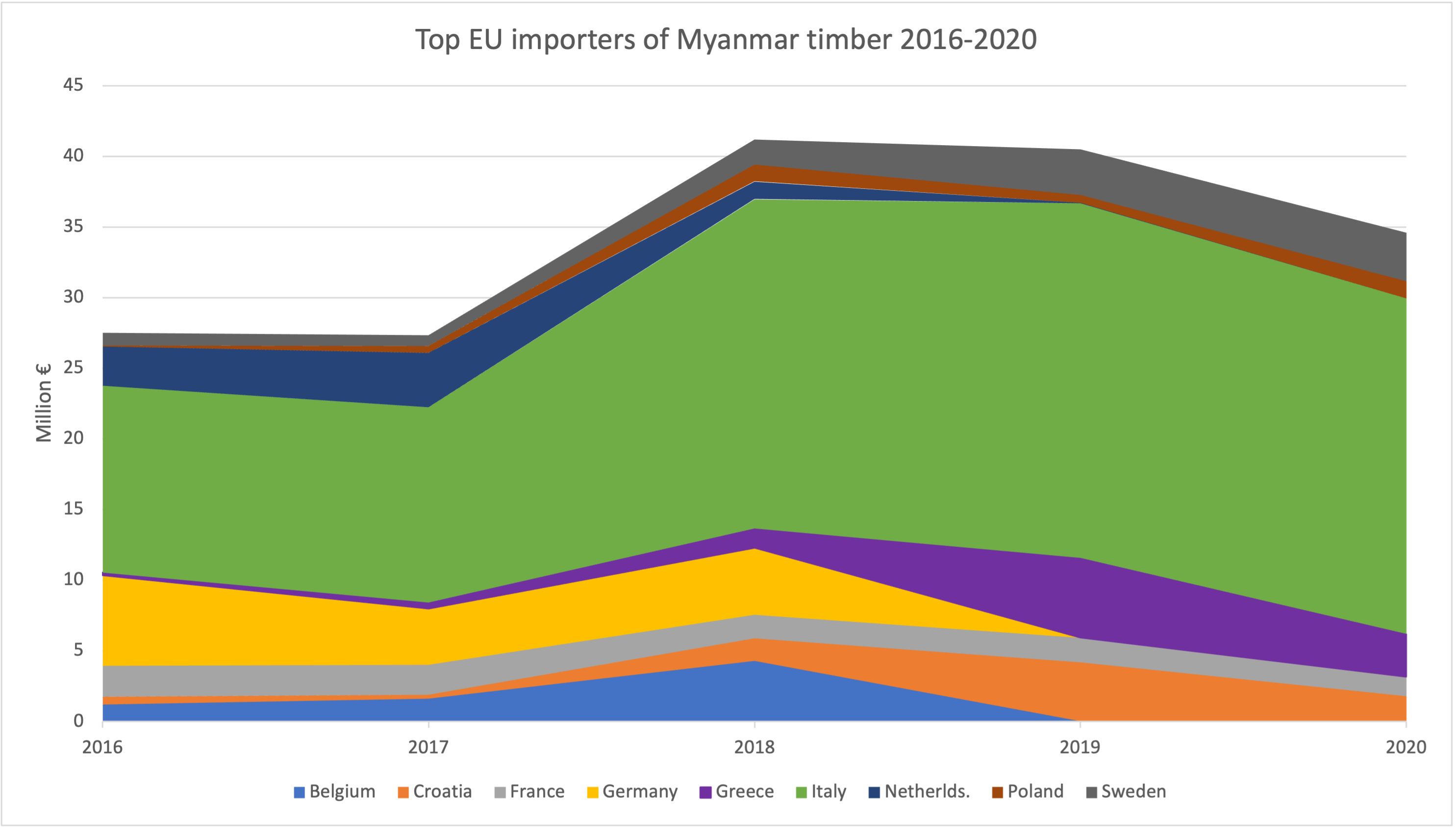 IMM has mentioned anecdotal evidence of market distortion caused by inconsistent EUTR enforcement in several reports since 2017 and has recommended ensuring harmonized implementation and enforcement of the EUTR throughout the EU to stop potentially illegal timber from entering the EU market, ensure a level playing field for all importers in the EU and maximise the market advantage for FLEGT-licensed timber in the EU.

A strong majority of EU importers participating in IMM trade consultations said they were in principle in favour of the EUTR and found that it could be a useful tool to address widespread environmental prejudice against tropical timber in important EU markets. However, consistent enforcement of the Regulation throughout the EU was considered a precondition for it to have a positive impact.