After a dip in 2017, EU imports of tropical wood products recovered ground in 2018. Most of the gains in 2018 were in imports from countries not engaged in the VPA process, including Nigeria, Brazil, India and China. 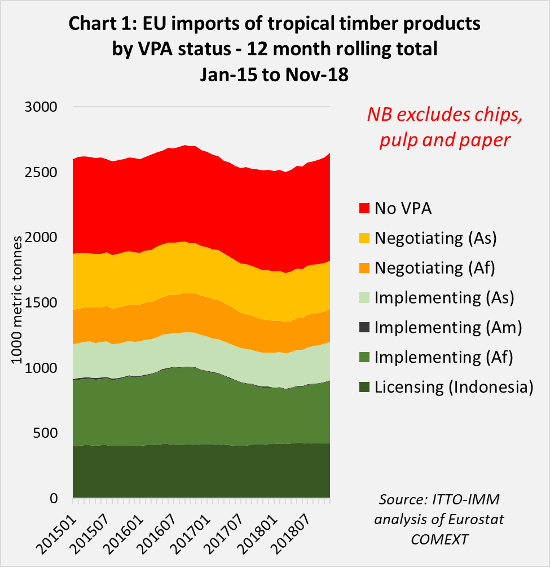 A significant proportion of the gain comprised charcoal from Nigeria and Venezuela which lie outside the scope of the EU Timber Regulation. These gains have offset a decline in imports of several commodities from variety of countries including sawnwood from Cameroon, joinery and plywood from Malaysia, veneers and plywood from Gabon, and mouldings from Indonesia. 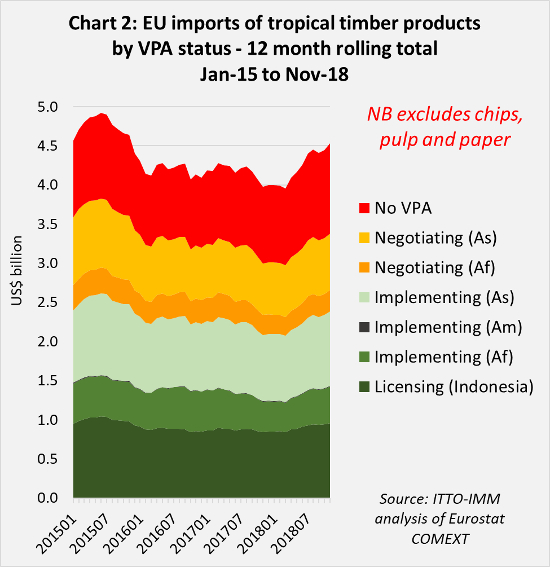 EU imports from the five VPA implementing countries in Africa (Cameroon, Central African Republic, Congo Republic, Ghana, and Liberia) have been very volatile in recent years. 12-month rolling imports increased sharply to 524,000 MT in September 2016 and then fell even more rapidly to a low of 385,000 MT in March 2018. In the following months, imports recovered some lost ground to reach 436,000 MT in the year ending November 2018. 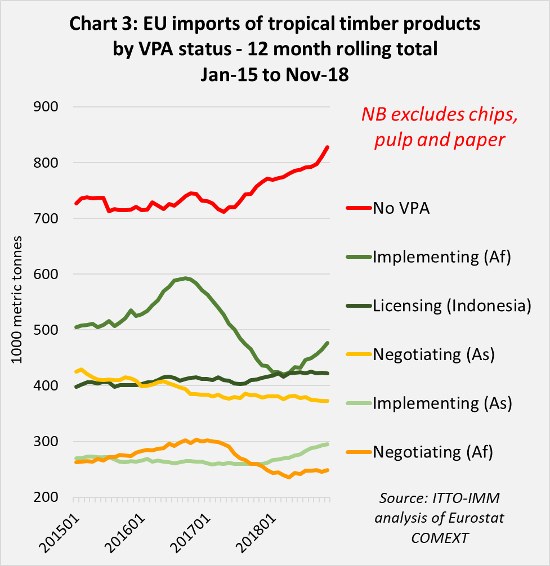 Much of the recent volatility in EU trade in timber from African VPA implementing countries is attributable to sawnwood imports from Cameroon, particularly in Belgium. Continuing weakness in EU trade with Cameroon during 2018 was partly offset by recovery in imports of logs from the Central African Republic and logs and sawnwood from Congo (Chart 4). 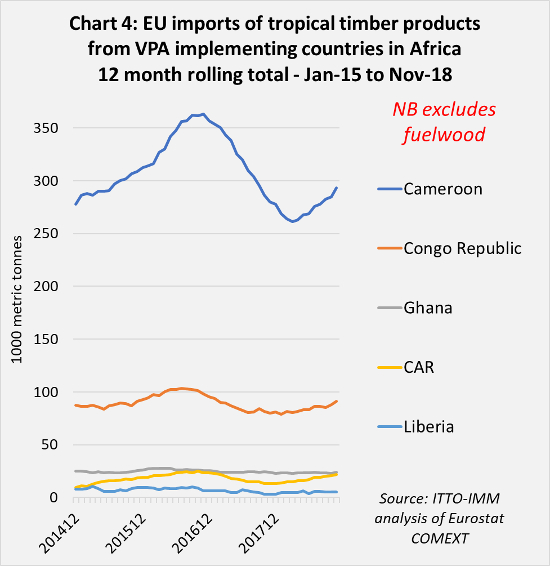 A range of factors have contributed to the volatility in EU imports from Africa in recent times including logistical problems and delays with shipping out of Douala port in Cameroon, overstocking in the EU in 2017 following arrival all at once of a large volume of delayed shipments from Africa, diminishing commercial availability of tropical hardwood species of interest to European buyers, delayed payment of VAT refunds by African governments which created financial challenges for operators in the region, and increasingly rigorous EUTR enforcement which, in the absence of FLEGT licenses, has placed a greater onus on EU importers to demonstrate the legal origin of timber.

Vietnam completed VPA negotiations in 2018 and is moving on to the VPA implementation phase this year. 12-month rolling total timber product imports into the EU from Vietnam increased from 220,000 MT at the end of 2017 to 232,000 MT in November 2018. While EU imports from Vietnam continue to be dominated by wood furniture (HS 94), much recent growth has been in imports of a range of other wood products in HS 44, notably plywood, laminated wood, planed sawnwood, and doors (Chart 5). 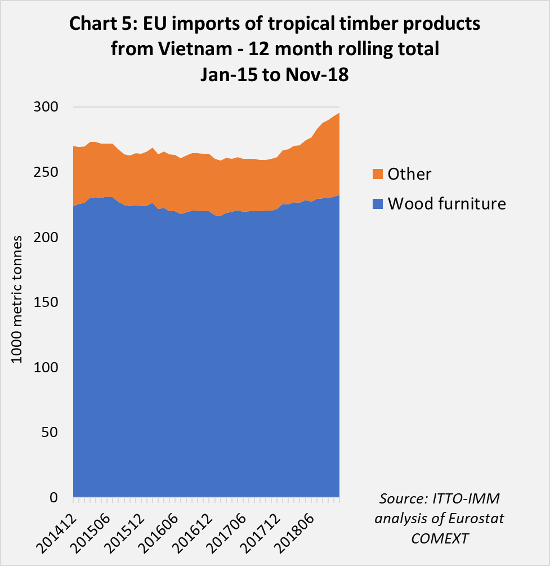 The two countries in Latin America that recently completed VPA negotiations, Guyana and Honduras, are currently only small suppliers of timber to the EU. Imports into the EU from Honduras, mainly sawn softwood, declined sharply in 2014 and 2015 and stabilised at the lower lever in 2017 and 2018. 12-month rolling total imports from Honduras were running at around 2,000 MT in 2018.

EU imports from Guyana, mainly consisting of hardwood logs and sawn, tend to be quite volatile with demand strongly focused on a specialist niche market for heavy duty sea and river defence applications. EU imports fell sharply from 8,000 MT in 2015 to only 3,000 MT in 2016, but then recovered some ground and were close to 5,000 MT in the year to November 2018. (Chart 6). 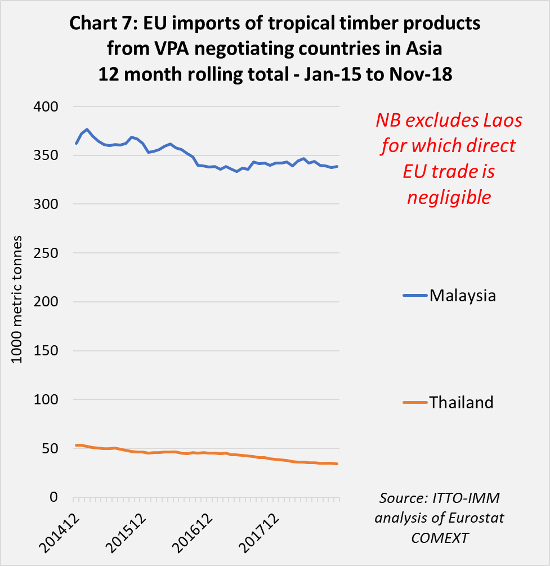 Of VPA negotiating countries, Malaysia is by far the largest supplier of tropical timber products to the EU. EU imports from Malaysia totalled 338,000 MT in the 12 months to November 2018, almost exactly equivalent to 340,000 MT in the previous 12-month period.  In 2018, EU imports of sawnwood and wood furniture from Malaysia strengthened, with particularly good demand for the former in the Netherlands, but this gain was offset by a decline in EU imports of Malaysian plywood, laminated window scantlings, and fibreboard (Chart 7).

EU imports of timber products from Thailand consist primarily of furniture, with smaller quantities of plywood, fibreboard, and charcoal. Total EU imports from Thailand were 34,000 MT in the 12 months to November 2018, down from 39,000 MT in the previous 12-month period. The decline affected all the main product groups imported from the country. 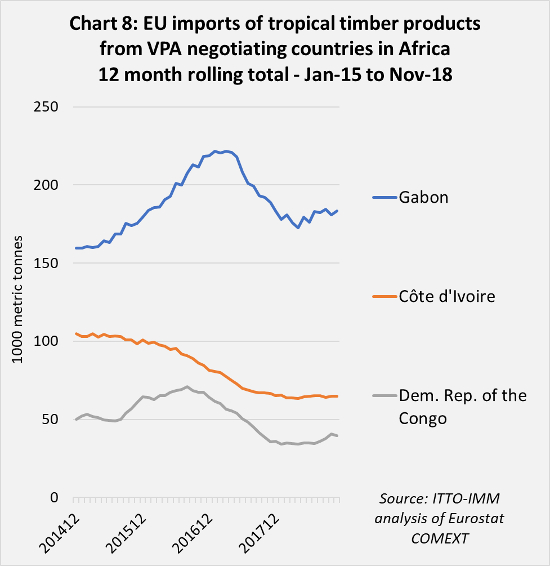 018. EU imports of veneer and plywood from Gabon fell sharply in 2018, only partly offset by a recovery in imports of sawnwood from the country. 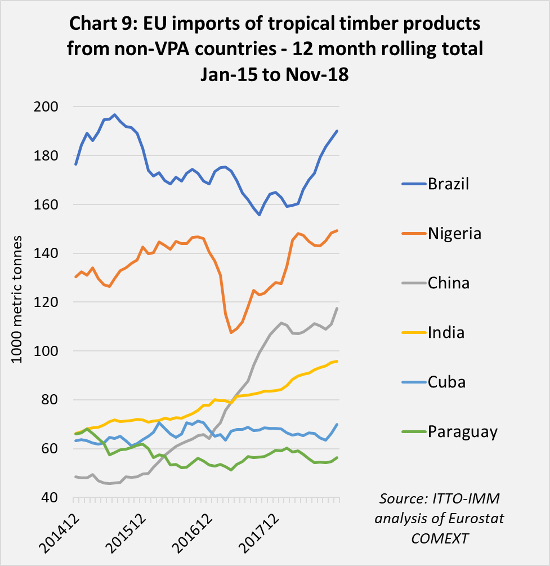 Meanwhile EU imports of tropical timber products from countries not engaged in the VPA process increased from 765,000 MT in the year to November 2017 to 830,000 MT in the year to November 2018. This is primarily due to a recovery in imports of hardwood sawnwood and decking from Brazil and of charcoal from Nigeria. Imports of tropical hardwood plywood from China and furniture from India have also continued to rise.  Meanwhile imports from Cuba and Paraguay, almost all comprising charcoal, have remained relatively stable in the last 4 years.

The large, and in some cases rising, contribution of non-VPA tropical countries in EU timber product imports highlights that in the interests of ensuring a level playing field and to maximise the market benefits of FLEGT licensing, efforts to ensure uniform and effective application of EUTR should continue to be prioritised. Furthermore, EUTR regulators should be encouraged to focus attention on the rigour of due diligence procedures with respect to these various products from countries not actively engaged in the VPA process. Consideration also needs to be given to the scope of products covered by EUTR since a significant component of imports from non-VPA countries comprises products such as wooden seating and charcoal not currently captured by the legislation.