The two countries in Latin America that recently completed VPA negotiations, Guyana and Honduras, are currently only small suppliers of timber to the EU.

Imports were rising from Guyana until June last year but slowed in the second half of 2019. Imports from Honduras declined consistently in the four years to 2019 but recovered a little ground in the first quarter of 2020 (see Chart). 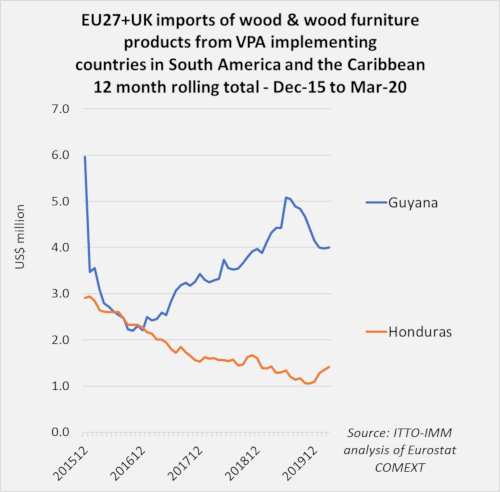 EU27+UK imports from Guyana, mainly consisting of hardwood logs and sawn destined for the UK and Netherlands, tend to be quite volatile with demand strongly focused on a specialist niche market for heavy duty sea and river defence applications. Having fallen sharply to only US$2.2 million in 2016, imports from Guyana increased to a peak of US$5.1 million in the year to July 2019 before easing to US$4.0 million in the year to March 2012.