The COVID pandemic led to upheaval in the EU27+UK wood market and wider economy in 2020. The first half of the year saw the deepest recession in history in both the EU and the UK. With strict lockdowns in place in many countries between March and June, the EU27 economy shrunk 14.6% in the first 6 months of the year, while UK GDP fell 22.3% Then between July and September, the economy picked up, with record growth of 11.5% in the EU27 and 15.5% in the UK (Chart 1). 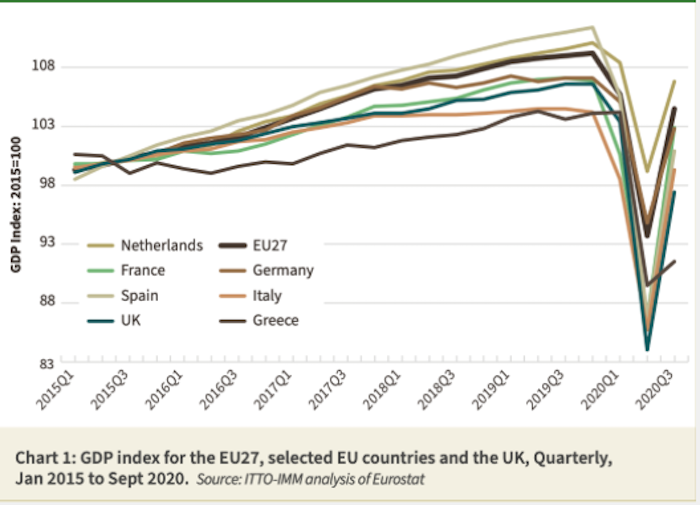 Economic data for the last quarter of 2020 has yet to be published, but the signs are that the recovery came to a sharp end with a second wave of lockdowns starting in October. A “double dip” recession is expected, with another decline in GDP forecast in the first quarter of 2021.

The second waves of COVID infection across Europe during the winter months have grown to be significantly larger than the first waves last year. According to the Oxford “stringency index”, which records the strictness of ‘lockdown style’ policies to limit the spread of COVID-19, since mid-October, most of the EU27 and the UK have been subject to restrictions as severe as those imposed in the first lockdown between March and June last year. It is expected that these renewed measures will be in force in most European countries at least until mid- February and probably much longer.

In the EU’s Autumn Economic Forecast published in November, EU27 GDP is reckoned to have contracted by about 7.5% in total in 2020 and is forecast to rebound by 4% in 2021 and by 3% in 2022. This implies that output in the European economy will barely return to pre-pandemic levels in 2022. The depth of the recession in 2020 and the speed of the recovery in 2021 and 2022 are expected to vary widely across member states. This reflects not only the severity of the pandemic and the stringency of containment measures, but also differences in economic structures and domestic policy responses.

Germany has benefited from its greater reliance on manufacturing, with factories staying open while government- mandated lockdowns shut non-essential shops and much of the hospitality sector. The EU’s biggest economy probably managed to post some growth in the fourth quarter and may therefore avoid the “double dip” recession. In November, the EU forecast a relatively modest decline of 5.6% in Germany’s GDP in 2020. The economic decline in the Netherlands, which implemented a less severe lockdown during the first wave of the virus, was also muted, the EU forecasting a decline of “only” 5.3%.

There were bigger declines in the economies of European countries like France, Italy, Spain and Belgium that are more reliant on services and where the first wave of the pandemic was particularly severe. The EU’s latest projection is that the French, Italian, Spanish and Belgian economies shrank respectively 9.4%, 9.9%, 12.4% and 8.4% in 2020.

The UK’s economy suffered severely in 2020, being amongst the countries most severely affected by the pandemic and heavily dependent on service industries forced to close during the lockdown, while also suffering from the added uncertainty of Brexit. The UK Treasury’s independent spending watchdog, the Office for Budget Responsibility (OBR), latest forecast, released in November saw the UK economy contracting 11.3% in 2020 and not returning to its pre-crisis level until the end of 2022, at the earliest.

One relatively positive factor for the EU timber trade in 2020 was that the initial downturn in construction sector activity, which is a key driver of timber demand, during the first “great lockdown” was short and followed by a stronger rebound than other areas of the economy. Overall construction activity across the EU fell by around 20% between March and April but rebounded back almost to the pre- lockdown level by July (Chart 2). 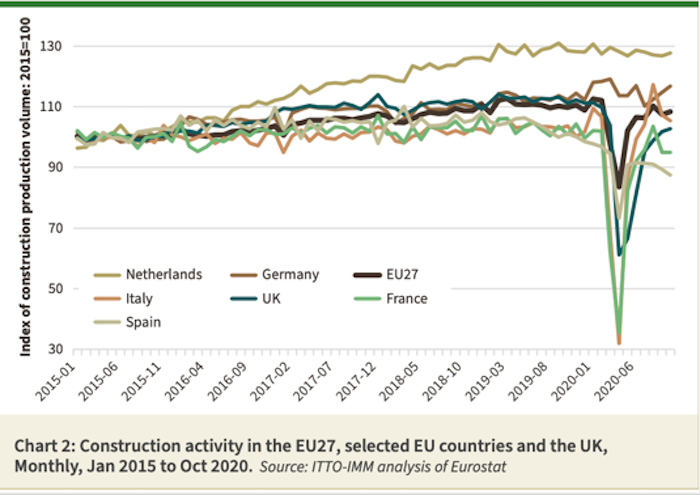 In some EU27 countries with less stringent lockdowns, notably the Netherlands, commercial construction activity continued largely uninterrupted throughout 2020. The downturn in construction in France, UK, Italy and Spain was much greater, with activity falling by more than 50% between March and April last year. In the case of France, Spain and UK, construction had yet to reach pre-pandemic levels by October just when the second series of lockdowns was being imposed.

While commercial construction activity slowed in many EU27+UK countries during the pandemic, there were widespread reports of good demand for timber products from the DIY sector in the spring and summer months. DIY and hardware stores were allowed to open in many countries during the lockdown, being seen as essential services, and many people took the opportunity to carry out improvement work on their homes during this period.

The direct impact of the first lockdown on wood product and furniture manufacturing activity across the EU27 was short-lived (Chart 3). Both sectors seem to have adapted quite quickly to the new social distancing measures and were able to service the continuing demand from the construction and DIY sectors. Both sectors experienced a sharp dip in March and April but had rebounded to pre lockdown levels before the end of July. The downturn in EU27 wood furniture production was particularly sharp, falling around 50% across the region in the first lockdown, with production coming almost to a complete standstill in Italy, France and Spain during the period. However, even in these countries production was close to, and in some cases even exceeding, normal levels by July. 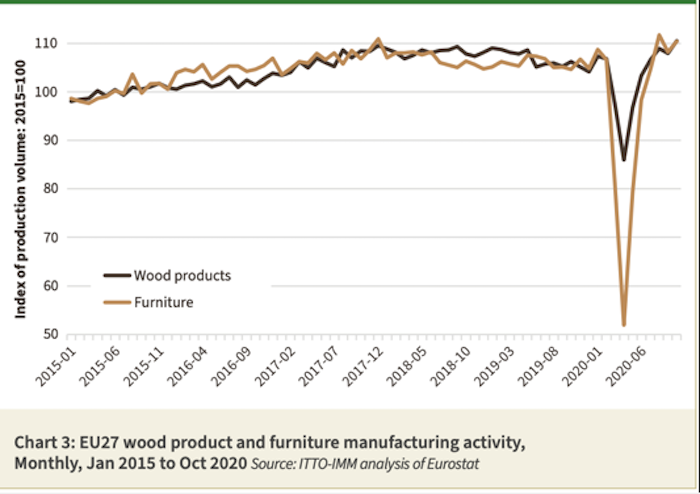 European countries have engaged in unprecedented and swift fiscal measures to tackle the economic crisis. On 21 July last year, EU leaders agreed on a €750 billion recovery effort, Next Generation EU, to help the EU tackle the crisis caused by the pandemic. Over the following six months, the recovery package went through the legislative steps to be ready in 2021. Alongside the recovery package, EU leaders agreed on a €1 trillion long-term EU budget for 2021-2027. Among other measures, the budget will support investment in the green and digital transitions and economic resilience. Together with the €540 billion of funds already in place for the three safety nets (for workers, for businesses and for member states), the overall EU’s recovery package amounts to €2.36 trillion.

At the same time, individual European governments have adopted a range of fiscal measures in a desperate bid to protect business, workers and families from the worst of the pandemic-induced pain. Bruegel, the European economic think tank, estimates the total value of these measures in the EU and UK to be at least €4.2 trillion, including €800 billion of additional government spending and/or foregone revenues (such as tax breaks), €900 billion in tax deferrals and €2.5 trillion in other liquidity and loan guarantees for companies with financing problems.

These extraordinary measures are helping support essential business and social infra-structure during the pandemic and should provide a boost to economic activity in the medium term. They do however come at the cost of a much larger debt burden in the long term. And with the reintroduction of lockdown measures across much of the EU27 and the UK in November, they have yet to be translated into sustained recovery.

Forward looking indicators show that economic momentum in the EU27 is unlikely to pick up pace in the first quarter of 2021. The IHS Markit Eurozone PMI Composite Output Index rose from 45.3 in November to 49.1 in December. However, a score below 50 indicates that a majority of those surveyed recorded a decline in purchasing during the month. Services were the principal drag on economic output, with activity here falling for a fourth successive month in December. Manufacturing remained the principal bright spot of eurozone economic performance, expanding for a sixth successive month and at a faster rate than in November. The latest PMI data for eurozone construction is also not encouraging.

IHS Markit, who undertake the survey, commented in their 6th January report that “Eurozone construction companies reported a continued downturn in activity during December, while incoming business also fell at a solid, albeit softer pace. Concerns surrounding the longer-term impact that the pandemic will have on the wider construction sector, alongside a lack of new projects in both the public and private sector being bought to tender, resulted in an extension to the pessimistic outlook held by eurozone-based builders for a fifth month in a row”.

IHS Markit noted in relation to individual countries that “France and Germany continued to report further declines in construction activity, with the former signaling the steepest fall since May. Italian firms on the other hand registered marginal growth for the first time since September.”

IHS Markit PMI data for UK construction in December was more positive, showing that the rebound in UK construction activity continued during the month, primarily due to another rise in house building. According to IHS Markit, new order levels for UK construction increased for the seventh successive month. However, the PMI value of 54.6 for December implies only slow recovery from the very steep declines recorded earlier in the year.

Also, according to IHS Markit, the combination of the pandemic and Brexit meant that supply chains to the UK construction sector were “groaning at the seams and delivery times increased to the most dramatic extent for six months. Low availability for finished products and raw materials as a result of port disruptions added to builders’ woes as suppliers named their price for goods in acutely short supply and input price inflation increased to its highest level since April 2019”.

Most economists now predict that it will be the second quarter before a recovery in the EU27+UK economy ultimately gets under way. Looking positively, the bounce-back could be sharp, at least initially, once restrictions are eased and infections subside, as more of the population is vaccinated. Pent-up demand could see a chunk of the hundreds of billions of euros of consumers’ involuntary savings being unleashed. By the second half of the year, the EU’s unprecedented recovery fund and multi-year budget together with additional measures at national level should be supporting growth.