Having reached the highest level in more than a decade in October 2019, EU trade in tropical wood and wood furniture products slowed in the last two months of the year, a trend which accelerated in January and February this year. Contrary to expectations, with the large western European countries implementing COVID-19 lockdown measures during the month, EU imports of tropical wood products picked up again in March.

A significant downturn in imports is expected in April and May 2020 with the shutdown of large sections of the European economy. During March, widespread reports emerged of timber importers putting existing orders on hold for 30 to 60 days and refraining from making new orders. By the end of March, importers were already struggling to deal with a build-up of stock that could not be shifted as manufacturers, retailers and construction sites went into lockdown. The only question is how far and for how long will trade tumble in the months following March.

Given current uncertainty, the market position reported here cannot be taken as providing any real insight into future trends. It is better viewed as a baseline to measure the size of the expected fall when it inevitably comes.

Chart 1 shows twelve monthly rolling total US$ value of imports (to iron out seasonal fluctuations) from tropical countries into the EU27+UK of all wood and wood furniture products listed in HS Chapters 44 and 94 (excluding fuelwood, wood waste and chips). After hitting a high of US$4.64 billion in October 2019, the 12-month rolling total fell to US$4.45 billion in February this year, a level maintained into March. 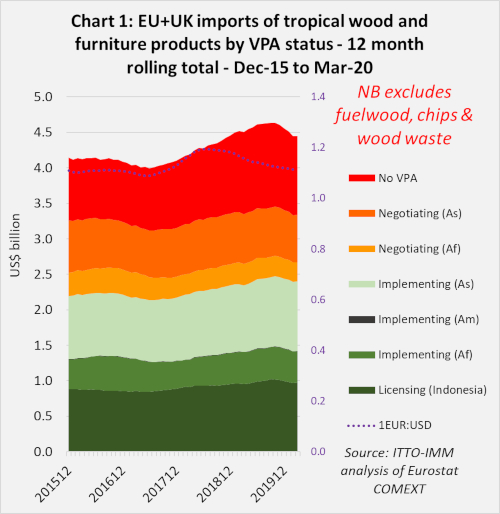 Chart 2 shows that the trend in import tonnage closely matches the US$ value trend (and so is not exclusively exchange-rate driven). The 12-month rolling total quantity of EU27+UK tropical wood and wood furniture imports increased to a peak of 2.77 million tonnes in August 2019 before slipping back to 2.60 million tonnes in February this year, a level maintained into March. 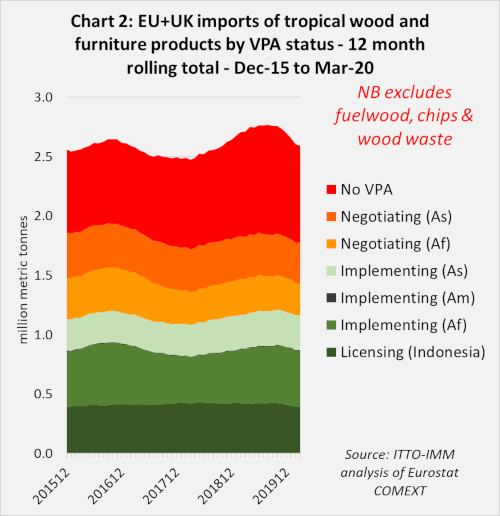 The decline in European imports in the last quarter of 2019 and first two months of this year of course predates any COVID-19 influence and coincides with a period of broader slowdown in the EU27+UK economy. Both the eurozone and the EU27+UK grew only 0.1 percent during the last three months of 2019 compared with the previous quarter, according to official statistics, the EU’s worst performance since the beginning of 2013.

All the EU’s largest economies deteriorated at the end of last year, Germany seeing flat growth, and Italy and France seeing a 0.3% and 0.1% contraction, respectively. Various factors contributed including continued Brexit uncertainty, slumping global trade, which hit European exports, widespread strikes in France over President Macron’s pension reforms, and weaker domestic demand for goods and services in Italy, alongside continuing political difficulties. During this period, the euro also continued to weaken against the US dollar, eroding the purchasing power of European importers.

The lack of any strong COVID signal in the trade data to the end of March is more obvious from the monthly data. The period of COVID-19 lockdown in Europe began in Italy with an emergency decree on 9th March covering the Lombardy region, Italy’s financial and industrial powerhouse. The Spanish government followed with a general confinement order for most of the country from 14th March. Then came lockdowns in France (17th March), Belgium (18th March), and the UK (23rd March).

The German federal government did not implement a nationwide lockdown in response to Covid-19, but during March state governments across the country progressively tightened restrictions on movement, prohibiting large gatherings, calling on people to stay at home, and asking that they observe other social distancing measures in an effort to stop spread of the virus. However, the German government also stressed the need to keep key sectors of the national economy functioning and issued a decree allowing construction activity to continue.

The Netherlands also stopped short of a complete lockdown. Instead, in a series of measures issued on 12 March, the Dutch government asked that people stay at home as much as possible, banned gatherings except those “necessary to ensure the continued daily operations of institutions, businesses and other organisations”, and encouraged other social distancing measures.

In March and April, according to a report by Bollore Logistics, European ports continued to operate despite difficult conditions and containers were being processed for onward movement, although clearances by some customs authorities were slower and there were border bottlenecks. Most shipping companies continued to operate, although they were adding surcharges and available space and equipment had become very restricted.

Chart 3 highlights that while EU27+UK monthly trade was highly volatile in the last quarter of 2019 and first quarter of this year, trade in March was significantly stronger than in February, and not noticeably slower than the same month in previous years. Imports from Indonesia were particularly strong in March this year, at US$96 million, the third best monthly import performance from Indonesia in the last 5 years. 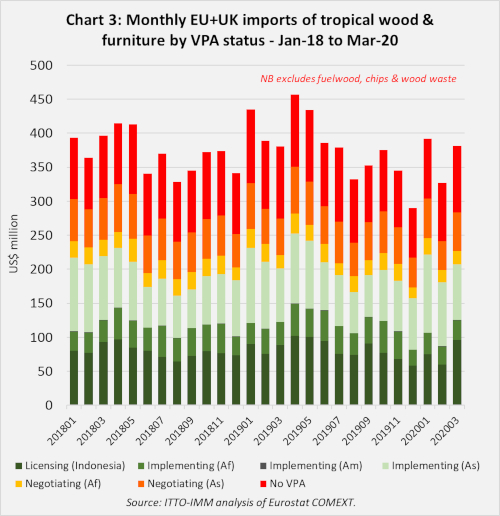 Chart 4 shows that nearly all the major European markets imported more tropical wood and wood furniture products in March this year compared to the previous month. France was the only significant market to record a decrease, but this followed a strong rise in imports in February. 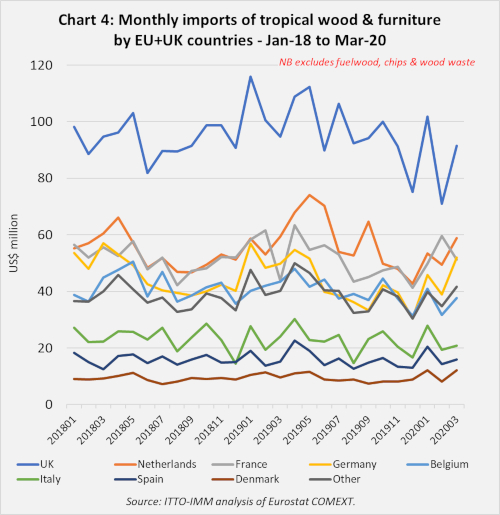 Chart 5 shows that EU27+UK imports of all tropical wood products were higher in March than in February this year. 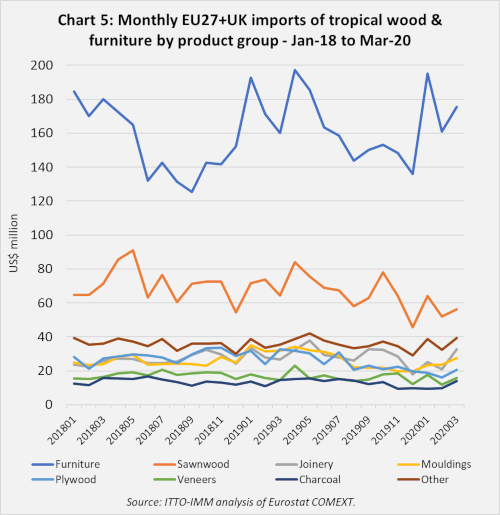 It would be wrong to read too much into this trade data which only captures the very beginning of the lockdown period. On April 15, in a joint conference call organised by the European Timber Trade Federation (ETTF) and the European Organization of the Sawmill Industry (EOS), representatives of eleven European trade associations concluded that the impact of the COVID-19 outbreak on the timber sector is wide‐ranging and severe and the legacy is likely to be long-lasting.

Indices of economic activity in the EU27+UK plunged in April and were only recovering slowly in May as the lockdown was eased in most European countries. On 6th May, the EC predicted a decline in EU economic activity this year of 7.5%, and slightly more than that for the eurozone. The EC also warned the outcome could be worse if the pandemic turns out to be longer or more severe than currently envisaged.

The EC report outlines sharp falls in hard-hit countries such as Italy, Spain and France — all of which will see their GDP drop by more than 8% this year. In Greece and Spain, the fall is forecast to be well over 9%. Even in Germany, which has won praise for its handling of the coronavirus crisis, the GDP downturn is expected to be 6.5% in 2020. According to European Commissioner for the Economy, Paolo Gentiloni, “in 2021 we expect a rebound of 6.1% in the EU and 6.3% in the euro area — not enough to fully make up for this year’s loss”.

In the UK, the economic damage wrought by the pandemic is expected to be even larger. On 7th May, the Bank of England forecast that UK GDP would fall 14% this year and tentatively predicted a 15% rebound next year, but that is dependent on coronavirus restrictions being lifted without a causing a second wave of the virus.

The Construction Purchasing Managers Index (PMI) for the UK, published by IHS Markit, showed the sharpest decline since the survey began 23 years ago, falling from 39.3 in March to only 8.2 in April (a score below 50 indicates contraction).

The Eurozone PMI fell to 15.1 in April, a new record low which followed a substantial drop in March, when the figure had fallen to 33.5. Survey data showed Italy and France recorded extreme contractions in construction output, while Germany registered a far slower decline but one that was still marked overall.

European countries have engaged in unprecedented and swift fiscal measures to tackle the economic crisis. To date, European governments have committed at least $1.5 trillion in spending and loan guarantees in a desperate bid to protect business, workers and families from the worst of the pandemic-induced pain.

National measures have taken a similar form across Europe and have included a combination of direct fiscal stimulus, short-time work schemes, and guarantees and liquidity support for companies with financing problems. According to Eurogroup President Mario Centeno, eurozone member states have, on average, adopted fiscal stimulus measures of some 2% of GDP and guarantee schemes of some 13% of GDP.

Meanwhile the effects on the supply side in tropical countries are expected to be equally profound. This is well illustrated by a statement issued in April by the Vietnam Timber and Forest Product Association (VTFPA) which said that the wood industry in the country faced a ‘disaster’ with many businesses left without orders from now until 2021 due to the pandemic.

“Many Vietnamese wood processing enterprises have had orders cancelled of suspended,” said the VTFPA. “Since March, 80% of Vietnamese exporters to the US and EU markets had received cancellations or delays until the situation improves”. The VTFPA statement highlights that wood manufacturing businesses are facing sharp rises in input prices for wood and other materials while freight costs have increased $500-1,000 per container. Some Vietnamese furniture companies are now sitting on 100s of containers of finished goods that cannot be shipped and must be stored in warehouses at considerable cost for an unknown length of time.