In the last 2 years, the level of trade between VPA partners and the EU has varied widely depending on the individual country and product. EU imports from Indonesia, currently the only FLEGT licensing country, have remained level at an annual average of €800 million since the start of 2016. This contrasts with imports from the five VPA implementing countries in Africa which declined continuously from an average annual level of €430 million at the start of 2017 to €330 million in March 2018.

Imports from the VPA negotiating countries fell from an annual average of €1.73 billion to €1.66 billion over the same period. Meanwhile EU imports of tropical products from countries not engaged in the VPA process increased from annual average of €850 million at the start of 2017 to €940 million in March 2018 (Chart 1). 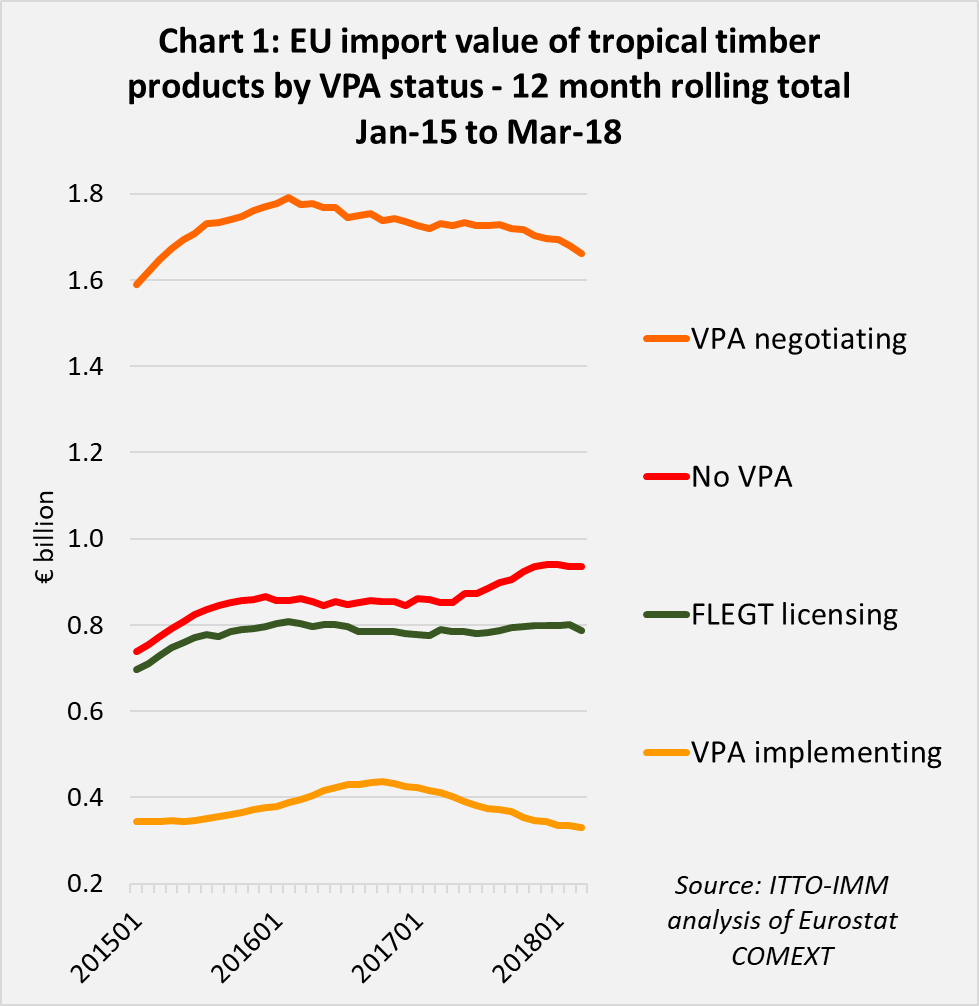 The picture looks slightly different when EU imports are measured in tonnes rather than euros. The same downward trend is registered for VPA implementing countries and is even more pronounced for VPA negotiating countries. The upward trend for non-VPA countries is also much more pronounced when measured in tonnes. And in contrast to the stability when measured in euros, EU import tonnage from Indonesia increased by around 6% from an annual average of 680,000 tonnes at the start of 2017 to around 720,000 tonnes in March 2018 (Chart 2). 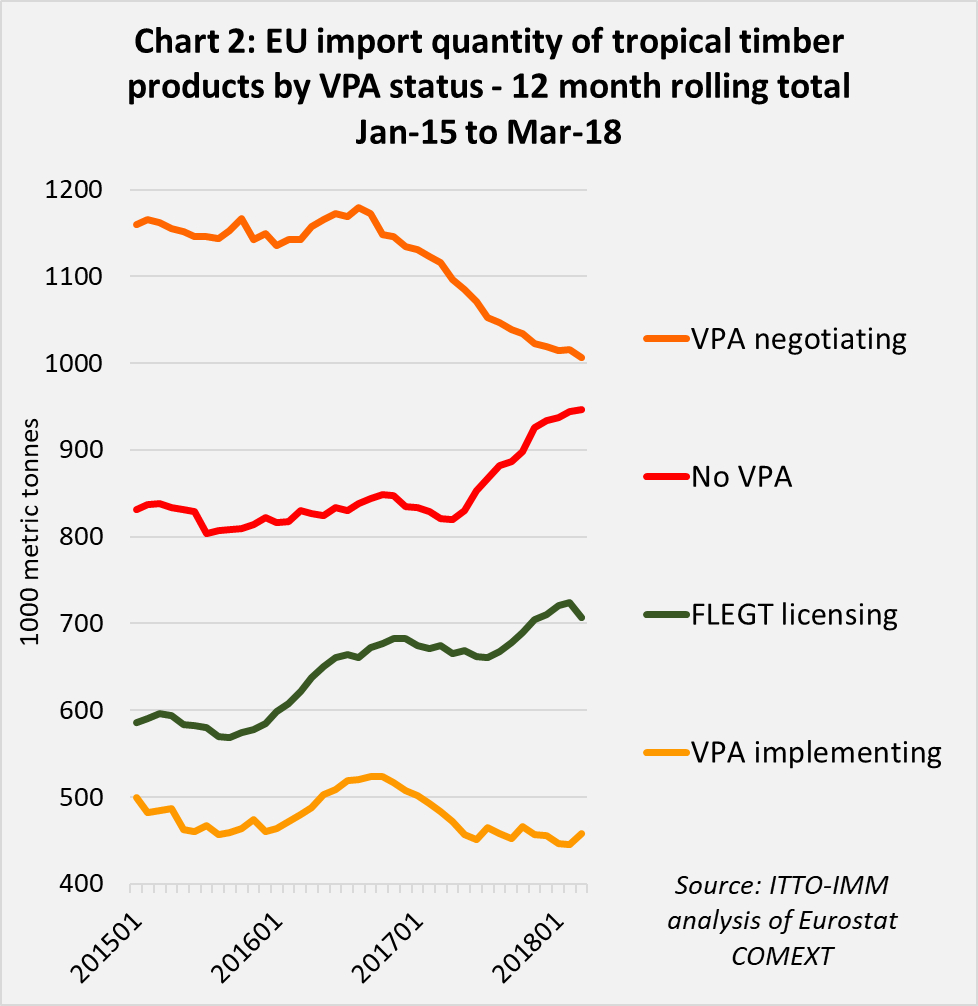 The reason for the rise in EU import tonnage from Indonesia during 2017 and the first quarter of 2018, a trend which is not mirrored by a rise in import value, is clear from a closer analysis of the product groups involved. Much of the rise was driven by paper products, with a significant contribution also made by charcoal. These product groups have low unit value relative to finished wood products. EU imports from Indonesia of lower weight but higher value products such as wood furniture, joinery, and decking were broadly flat during this period. However, a continuing decline in EU imports of wood flooring from Indonesia was offset by a greater rise in imports of plywood (Chart 3). 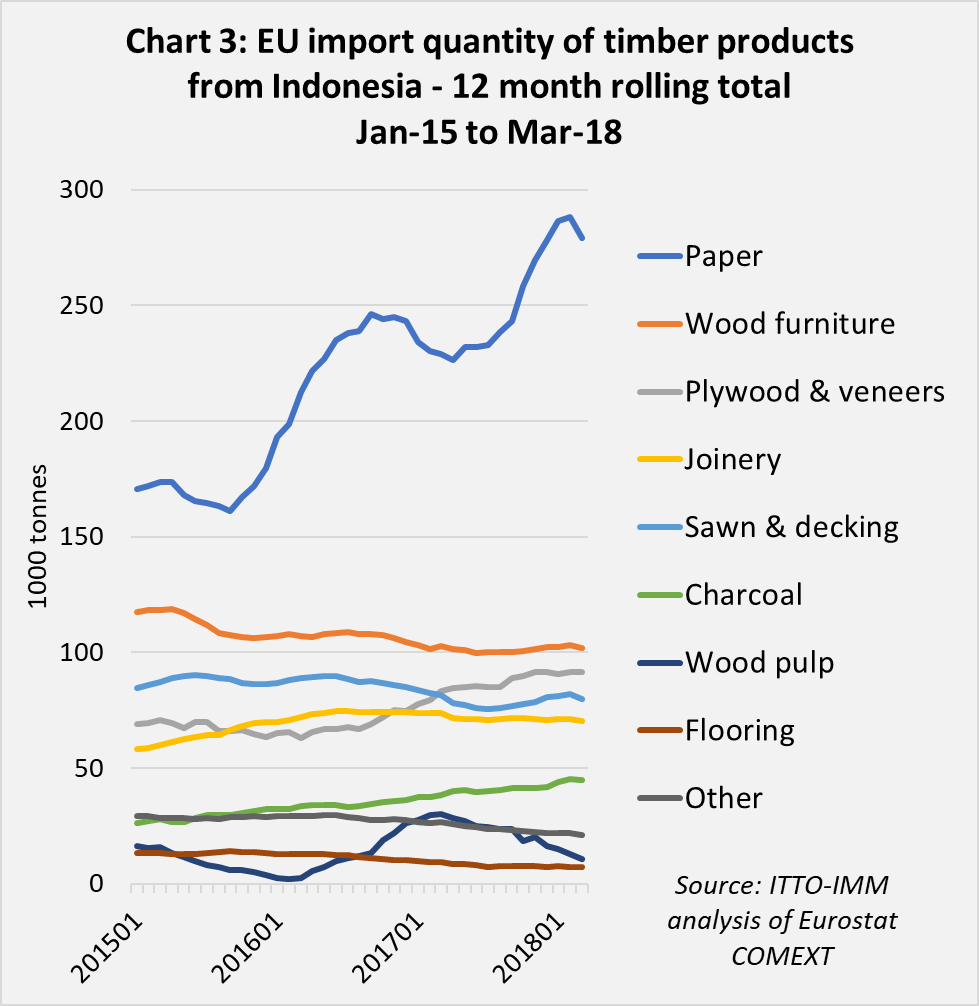 Chart 4 shows that FLEGT licensed products from Indonesia feature in the list of products that made most gains in the EU tropical timber market in the year ending March 2018. In the 12 months between April 2017 and March 2018, EU imports of Indonesian wood furniture, plywood, and mouldings were respectively €5.9 million, €4.2 million and €4.0 million more than in the year ending March 2017. Indonesia also exported an additional €6 million of charcoal, a product not subject to FLEGT licensing, during this period. 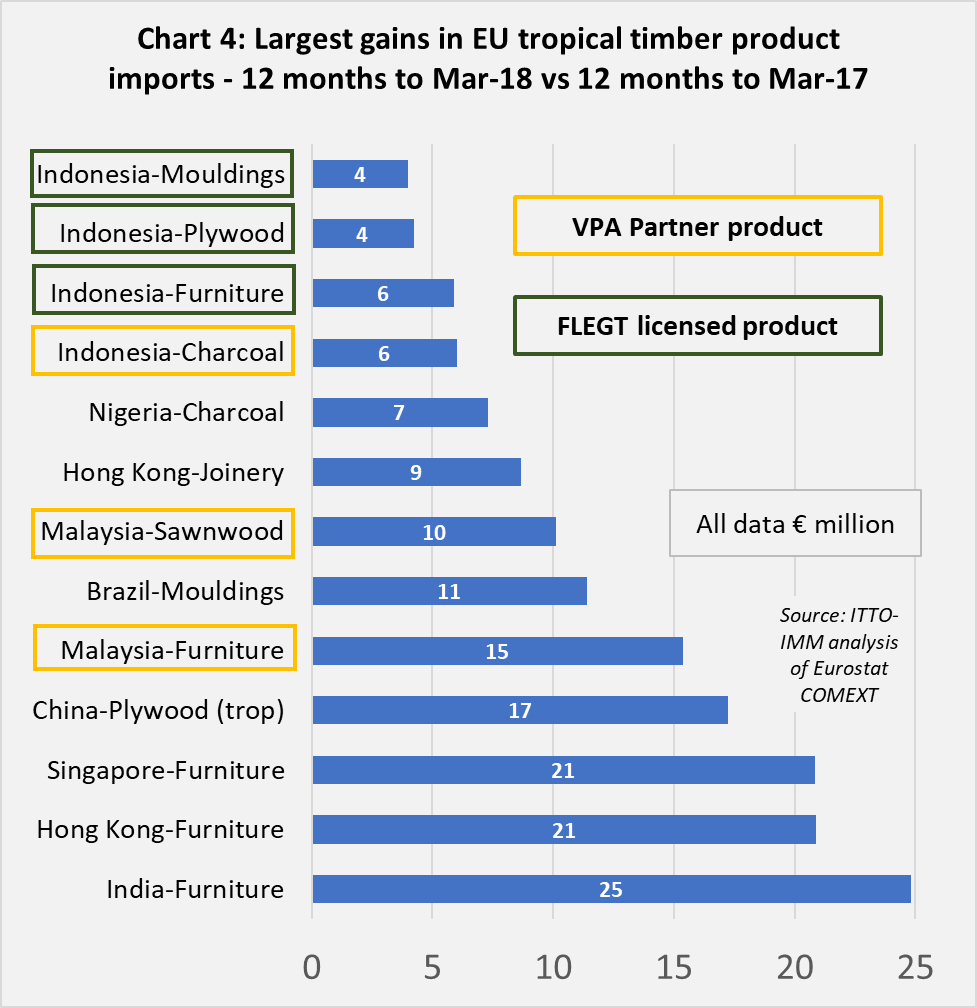 While these gains are encouraging for Indonesia, they were overshadowed by much larger increases in EU imports of products from tropical countries not engaged in the VPA process. EU imports of wood furniture from India were €25 million greater in the year ending March 2018 than in the previous 12-month period. Imports of wood furniture from Hong Kong and Singapore increased by €21 million each during the same period. While the latter will include a large proportion of product trans-shipped from China and other parts of South East Asia, India is a more direct competitor to Indonesia in the EU wood furniture market.

In addition to rising EU imports of wood furniture from non-VPA countries, there was also a significant increase in plywood imports from China identified with a tropical hardwood face in the 12 months to March 2018. This was due to revision of customs product codes in 2017 which saw a large number of timber species previously labelled ‘other hardwoods’ now identified as ‘tropical’. As a result, the rise in imports of tropical hardwood plywood from China was more than offset by a decline in imports of “other hardwood” plywood.

Potentially more significant from the perspective of EU market share for FLEGT licensed timber, was a large rise in EU imports of hardwood mouldings from Brazil in the year to March 2018. Malaysian furniture products also made some significant gains. 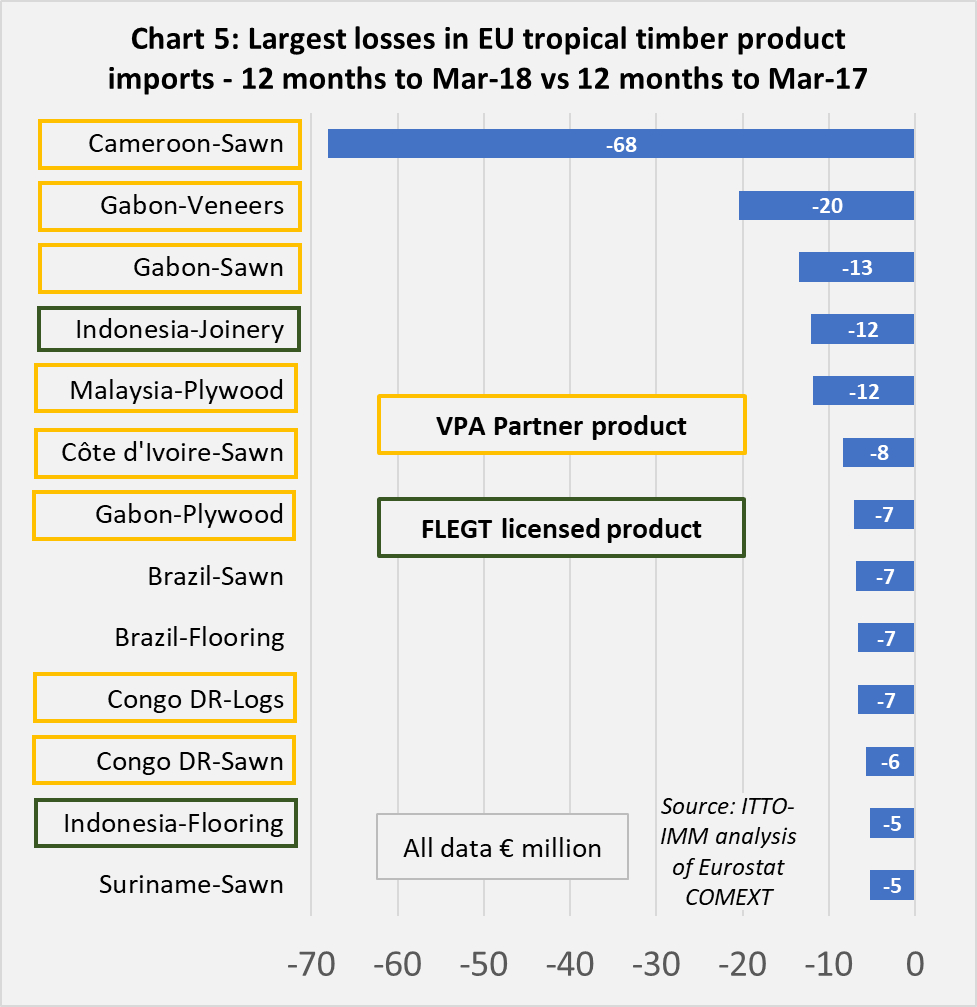 A range of factors conspired to result in low EU imports of African timber products in the year ending March 2018. These included on-going serious problems and delays with shipping out of Douala port in Cameroon, overstocking in the EU in early 2017 following arrival all at once of a large volume of delayed shipments from Africa, diminishing commercial availability of tropical hardwood species of interest to European buyers, and delayed payment of VAT refunds by African governments, partly linked to low oil prices, which created additional financial challenges for operators in the region.

From the perspective of EU market demand for FLEGT licensed products, the decline in EU imports of Indonesian joinery and flooring products in the 12 months to March 2018 is a concern. The decline in flooring is a continuation of a downward trend long predating introduction of the licensing procedures and which affects all tropical countries engaged in this trade.

The decline in EU imports of joinery products from Indonesia in the 12 months to March 2018 may be more directly linked to the introduction of FLEGT licenses, although probably as much due to resulting alterations in product definitions than in actual trade and consumption patterns.

Following introduction of FLEGT licenses in November 2016, inconsistencies in the product codes used by EU customs and Indonesian licensing authorities led some EU authorities to reclassify finger-jointed laminated board from Indonesia (which includes window and door scantlings and kitchen tops) as a form of plywood instead of a joinery product. This had the incidental effect of increasing the EU import duty on this product by 6%.

The EU and Indonesia have since agreed that in future finger-jointed laminated board should be classified as a joinery product subject to the lower rate of duty. However, the change in trade classification by some EU customs authorities during 2017 will have contributed to the apparent downturn in EU imports of joinery from Indonesia and boosted the apparent level of EU trade in Indonesian plywood.