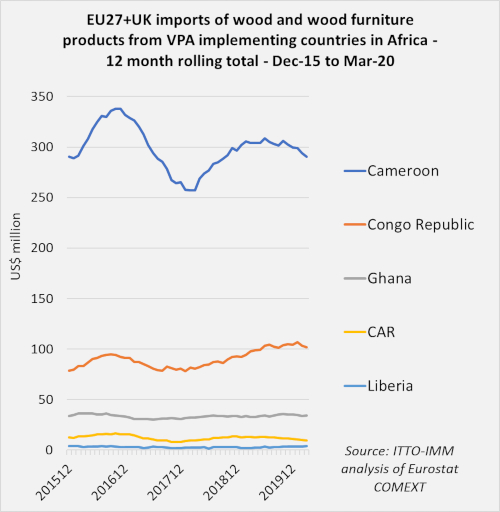 Most EU27+UK trade with Cameroon comprises sawnwood destined for Belgium. The volatility is due to supply side problems, notably shipment delays caused by bureaucratic red tape and poor infra-structure after many years with little or no investment at Douala, the country’s only major port.

EU27+UK imports from the Republic of Congo (RoC), comprising sawnwood, logs and veneers, were rising consistently throughout 2018 and 2019. Rolling 12-month imports increased from US$78 million in January 2018 to a peak of US$105 million in November 2019 before easing back to US$102 million in March 2020. In the last two years there has been particularly strong growth in Belgian imports of logs and sawnwood and French imports of veneers from the RoC.

EU27+UK imports from Central African Republic (CAR), recovered from an annualised low of US$8 million in November 2017 to US$13 million in October 2018, where there remained level for the next three quarters. However, between the middle of 2019 and March 2020, annualised imports eased back again to US$9 million. EU27+UK imports of from CAR now consist almost exclusively of logs, mainly for France, Portugal and Belgium. Imports of sawnwood, previously destined mainly for Belgium, have fallen to negligible levels.

EU27+UK imports from Liberia, all of which comprises logs, are very limited, in recent years averaging around 5,000 tonnes with value less than US$3 million per year. However, in 2019 there was an uptick, with import quantity rising 29% to 7,500 tonnes with value closer to US$4 million.

The downturn in African veneer imports was particularly dramatic in the second half of 2019 – partly allied to weakness in the European plywood and door manufacturing sectors during this period. There are also signs that tropical wood veneer is coming under pressure from temperate wood substitutes and a wide range of artificial surface materials.