EU27+UK imports from VPA negotiating countries in Africa: flatlining from Gabon and declining from Cote d’Ivoire and DRC

Of the three VPA negotiating countries in Africa, Gabon is the largest supplier to the EU27+UK. After declining in 2017, EU27+UK imports from Gabon in the next two years were very volatile on a monthly basis but overall, on an annual basis, were flat at around US$190 million.

Imports into the EU from Gabon comprise mainly veneer, mostly rotary veneer used to manufacture plywood in France, sawnwood, much imported via Belgium, and plywood, which goes mainly to the Netherlands and Italy. 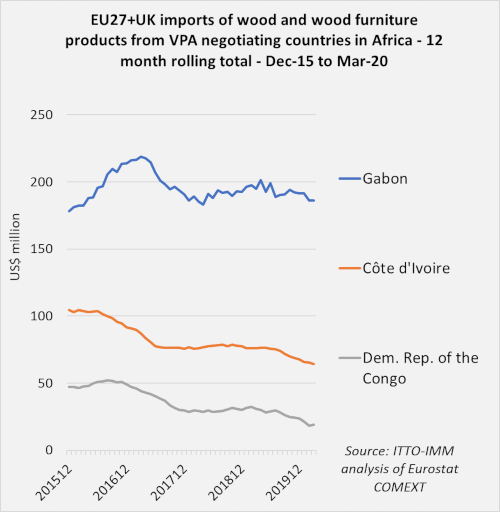 EU27+UK imports from Côte d’Ivoire consist primarily of veneers, destined for Italy, Spain, Romania, and Belgium, and sawnwood destined mainly for Italy, Belgium and the UK. After declining sharply in 2016 and 2017, EU27+UK imports from Côte d’Ivoire stabilised at a lower annualised level of around US$75 million throughout 2018 and the first half of 2019. The decline resumed in the third quarter of 2019 and continued into 2020, with trade falling to US$64 million in the year ending March 2019. The recent decline has affected both veneers and sawnwood, and has been particularly pronounced in Spain, Belgium and the UK.

After a short-lived upturn in EU27+UK imports from DRC in the last quarter of 2018, imports were sliding again throughout 2019 and the first quarter of 2020. After reaching US$31 million in the year ending December 2018, imports were down to US$19 million in the year ending March 2020. EU27+UK imports from DRC consist primarily of logs destined mainly for France and Portugal, sawnwood mainly for Belgium and the UK, with a smaller volume of veneer, going mainly to Greece.