It is ironic that in 2019, just before the market chaos created by COVID-19, the EU27+UK recorded its strongest year for tropical timber product imports since 2007. That was, of course, when the last consumer boom was at its peak just prior to the market meltdown of the financial crises. 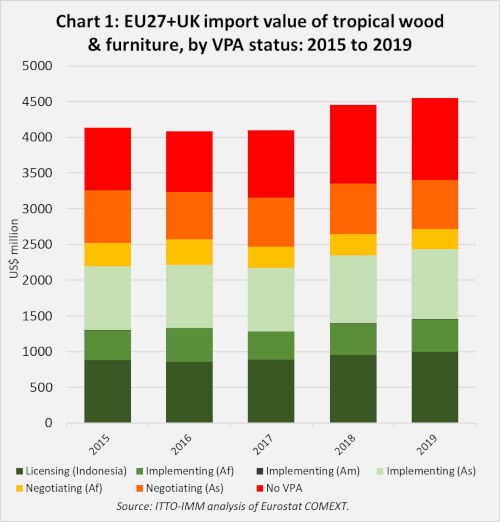 In 2018, the rise in global trade was driven by North America (mainly US), China, and Northeast Asia (Japan and South Korea). In 2019, imports fell in China and North East Asia but accelerated into the United States (Chart 2). This was mainly due to US imports of wood furniture switching away from China in favour of South East Asian suppliers, particularly Viet Nam. 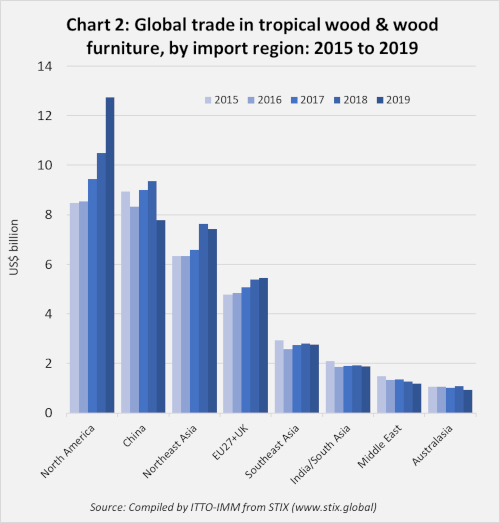 In the EU27+EU region, last year there were some positive gains for FLEGT licensed timber from Indonesia, which consolidated its position as the largest single tropical timber supply country to this market. However, the continued rise in EU27+EU imports of competing products from tropical countries with no engagement in the FLEGT process during the year raises questions about the benefits of FLEGT licensing in terms of improved overall competitiveness. Considering EU27+UK imports by VPA status (Chart 3): 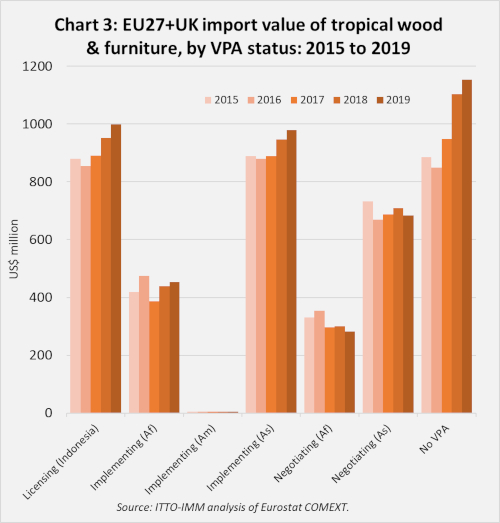 Indonesia increased its lead as the largest supplier of tropical wood and wood furniture products into the EU27+UK in 2019, staying just ahead of Viet Nam despite continued strong growth in imports from that country last year. Malaysia maintained its position as the third largest supplier to the EU27+UK last year with trade remaining broadly flat in recent years. India is consolidating its position as the fourth largest supplier having pushed Cameroon into fourth place in 2017. Imports from Brazil were rising rapidly between 2016 and 2019. Imports from Gabon have been flat. (Chart 4). 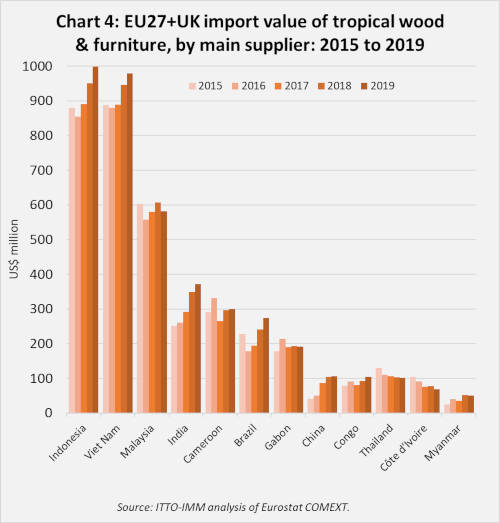 In terms of product mix, the growth in EU27+UK imports from the tropics last year was driven mainly by wood furniture (Chart 5). Import value of tropical furniture products was US$1.96 billion, up 7% compared to the previous year. The main South East Asian wood furniture supply countries – Indonesia, Viet Nam and Malaysia – have all followed a similar trajectory in the EU market in the last five years. A period of flat or declining imports between 2015 and 2018 followed by a sharp upturn in 2019. 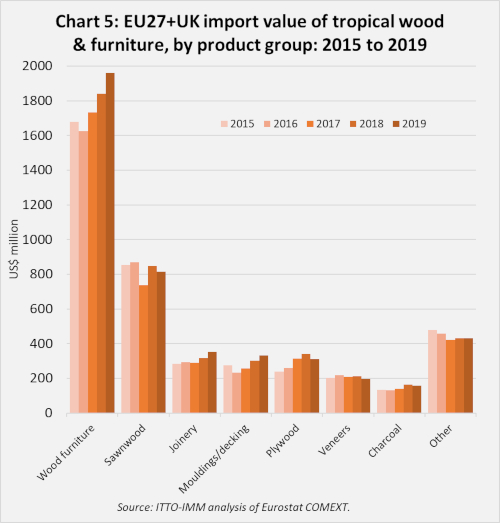 The European market situation for tropical wood products other than furniture was more mixed in 2019. Overall, if wood furniture is excluded, there was a slight increase in the tonnage of EU27+UK imports last year, but a decrease in value. The EU27+UK imported 2.13 million tonnes of these products with a total value of US$2.59 billion, respectively 1.5% greater and 0.8% less than the previous year.

Gains made in EU27+UK non-furniture wood products imports from the tropics in the first half of 2019 were eroded in the second half as the EU economy began to slow. The first half growth was driven mainly by a recovery in imports of sawnwood from Cameroon and of sawnwood and mouldings/decking from Brazil, particularly into Belgium, together with rising imports of a variety of joinery products (doors and laminates) from Indonesia and Malaysia. These gains offset falling imports of tropical logs, charcoal, plywood, and veneers.

The UK remains the leading destination for tropical wood and wood furniture imports in the EU27+UK region, posting a 5% gain in 2019 to US$1.18 billion to build on a 6% increase the previous year. Imports were also rising strongly into the Netherlands, the second largest destination, up 8% last year to US$695 million after a gain of 15% the previous year. Import performance of other EU destinations was more mixed last year, remaining static in France at US$617 million after gaining 14% the previous year, while declining in Germany (-4% to US$521 million), Belgium (-3% to US$486), and Italy (-4% to US$272 million) (Chart 6). 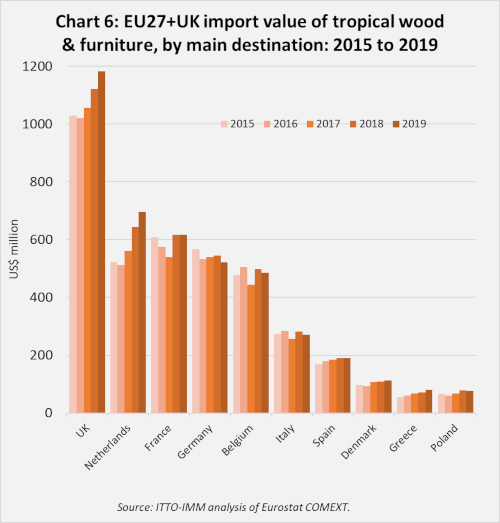