EU27+UK imports of tropical timber products from countries not engaged in the VPA process were making strong gains during 2018 and the first half of 2019, but in the case of Brazil and China, there was a significant slowdown in trade in the second half of 2019 which continued into the first quarter of 2020.

EU27+UK imports of wood products from India continued to rise without interruption during this period, hitting an all-time high of US$379 million in the year to March 2020 (see Chart). Import growth has been continuous in Germany, now the largest EU destination for Indian wood furniture, but slowed in the Netherlands, the second largest destination, from the last quarter of 2019. Imports from India into the UK, the third largest destination, were rising in 2017 and 2018, but were flat in 2019 and sliding in the first quarter of 2020. Imports in France, the fourth largest EU destination fell slightly in 2019. 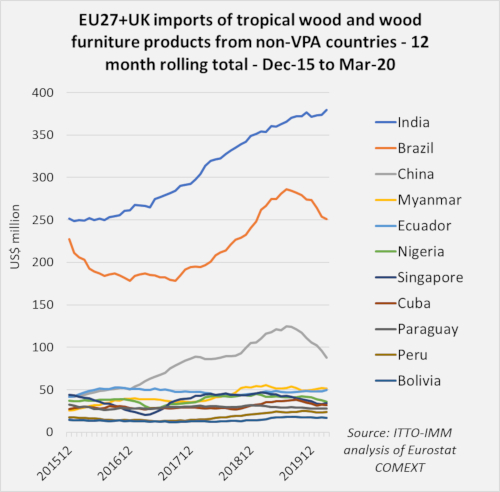 EU27+UK imports from India mainly consist of wood furniture made from local plantation species such as mango, sheesham, acacia and rubberwood, often in rustic style which are hand-crafted and for which formal quality standards were not high. Usage of sheesham for Indian furniture manufacturing has been declining, as it is a CITES-listed Dalbergia species, while use of mango has been rising in recent years.

EU imports of tropical wood products from Brazil, which consist mainly of sawnwood and decking, increased strongly to a peak of US$286 million in the year ending August 2019 before falling back to US$251 million in the year ending March 2020. From a price point of view, Brazilian products have been highly competitive on international markets in recent years. The value of the Brazilian real is currently at historically very low levels on international currency exchange markets and has lost nearly 50% against the euro in the last decade which has meant that Brazilian producers are more inclined to export.

At the same time, the EC and EUTR Competent Authorities introduced, at a FLEGT-EUTR Expert Group meeting on December 2018 (reaffirmed at their meeting on December 2019), far-reaching guidance which stresses that “insofar as imports of species harvested in natural forests in the Brazilian Amazon basin are concerned…. operators should generally consider the level of risk of illegality as not negligible unless adequate risk mitigation measures have been taken that demonstrably reduce the level of risk to a negligible level”.

The FLEGT-EUTR Expert Group also specified, in relation to timber from the Brazilian Amazon, that “to mitigate the risk of illegally harvested timber entering the EU market to a negligible level, due diligence should specifically include an independent factual verification of the reliability of the determination of available timber volumes in AMFs (Área de Manejo Florestal) as well as on the integrity of the operator’s supply chain” (this and other measures required are described in detail in the minutes of FLEGT-EUTR Expert Group on 7th December 2018).

Despite these strictures, between 2017 and 2019, French imports of Brazilian hardwood decking increased from just over US$30 million to US$77 million. French import growth from Brazil began to slow in the last quarter of 2019 and the annualised level had fallen to US$72 million in the year to end March 2020. French imports of Brazilian sawn hardwood from Brazil were also rising rapidly between 2017 and the middle of 2019, reaching a peak of US$40 million in July 2019 before falling back to US$28 million in the year to March 2020.

There was uninterrupted increase in EU27+UK imports of plywood with a tropical hardwood face from China between January 2017 and September last year, with US$ value rising from US$50 million to over US$120 million during this period. However, with a sharp deterioration in the European market for plywood at the end of last year, imports had fallen back to only US$88 million in the year to March 2020. Around two thirds of all EU27+UK imports Chinese tropical hardwood faced plywood are destined for the UK.

EU27+UK imports of wood products from Myanmar, after rising from US$35 million in 2017 to US$53 million in 2018, remained at this higher level throughout 2019 and the first quarter of 2020. Imports from Myanmar comprise mainly sawnwood with smaller volumes of mouldings/decking and veneer.

Imports from Myanmar have continued despite high profile EUTR prosecutions of importers of Myanmar teak (in Sweden and the Netherlands) and the conclusions of the EC’s FLEGT-EUTR expert group (most recently reiterated at their 12 December 2019 meeting) that “it is not possible to come to a negligible risk of illegally harvested timber from [Myanmar], in particular due to a lack of sufficient access to the applicable legislation and documentation from governmental sources”.