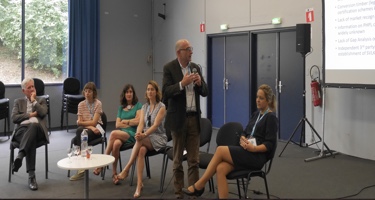 Among key factors in the decline in the European market for tropical timber identified by breakout group participants focusing on the topic at the IMM Trade Consultation in Nantes was the 2008 financial crisis, which forced changes in supply in Africa particularly and led to rationalisation of the sector.

In recent years, European consumption patterns have changed too. The market has increasingly required value-added products. These add to processing and manufacturing costs and the trend has impacted adversely on underfunded tropical producers.

The EU market is also demanding smaller lumber dimensions and has shed capacity to transform logs and boules, so adding further burdens on tropical suppliers.

And at the same time, other markets have become more lucrative for the tropical trade. These, of course, include China, whose reputation for paying poorly is misplaced.

The Chinese are also keen to buy logs, which tropical exporters want to sell, while other markets accept a wider range of material, including lower qualities and lesser known species (LKS).  Europe, meanwhile, continues to focus on a limited range of varieties, which inevitably pushes prices up

Breakout session delegates also highlighted that alternative markets, notably again China, do not demand certified timber to the extent of European buyers, taking out another cost for the supplier and boosting their margins.

Tropical wood, said participants,  is also considered high risk under the EU Timber Regulation (EUTR), with ‘even FSC’ insufficient evidence of illegality risk mitigation. This adds a further disincentive into the European market.

Compounding this issue, tropical wood was said to have a ‘negative image for consumers’. “They see it as bad and don’t want to buy it,” said delegates.
Finally, the group concluded, the EU timber trade and end user sectors do not understand tropical wood from a technical perspective and, compared to the past, there is not much content and emphasis on it in the industries’ training curricula.

Turning round the EU tropical market

Delegates considered the potential role of FLEGT licensing to improve EU market demand for timber products from VPA Partner countries. Overall the discussion reinforced IMM’s existing recommendations that, while licensing can contribute to rebuilding market share, it cannot deliver this in isolation of other broader strategies to improve competitiveness.

It was suggested that while both FLEGT licensing and 3rd party certification could help to shape market perceptions of tropical wood and to stabilise and maintain market share, it cannot, on its own, win new customers.

It was felt that FLEGT licensing needed to be linked to new market promotional messages, such as GD Holz’s initiative with its ‘use it or lose it’ slogan for tropical timber.

Among the suggestions for halting or reversing the downward trend in the European tropical market, delegates suggested that the trade should move away from its focus on selling tropical wood by species. Instead it should sell solutions. “For instance, don’t market azobe or ekki, sell ‘decking product class 4’, or ‘bridging timber class X or Y,” was one comment.

“Sell the wood by fitness for purpose, not an exotic name that can only imply that it’s tropical,” was another

Lower cost finance was also urged to fund improvements in tropical forestry management and timber processing ‘which take time and cost money’. In time, the FLEGT process could contribute to this by helping to reduce the risk premium associated with tropical timber industries.

One recommended course of action here was for the timber industry to engage more transparently and inform investor rating services of FLEGT and other initiatives to promote better forest governance to help attract finance for the tropical sector.

Efforts to influence and inform wood technology and forestry training courses to broaden knowledge of tropical wood and its processing and applications were regarded as other useful strategies.

However, it was also noted that to fully exploit the potential of FLEGT licensing, more countries needed to be doing it. It was suggested that one country delivering FLEGT-licensed goods to the EU was not enough to increase awareness and shape market and investment trends.