Entrants in the Conversations About Climate Change design competition, the latest manifestation of the UK Timber Trade Federation’s government-funded FLEGT communication campaign, were given a demanding brief. They had to create a product or artwork entirely in timber from FLEGT VPA partner countries. It had to reflect the creator’s concerns about the environment, and invite discussion about the key role of the forest in averting climate crisis, the part using legally and sustainably sourced timber plays in helping maintain the forest, and, of course, about FLEGT. The TTF acknowledges it laid down quite a challenge. But even before the online exhibition featuring the six winning designs went live on February 12, the conversation triggered by the project had gone global. It attracted over 100 entries from around the world.

“We publicized it through trade media, the trade itself and our channels with VPA partner countries, but we were thrilled with how far the message reached and the response,” said TTF FLEGT Communications Executive Lucy Bedry. “We had entries from across Europe, South America, Asia, Africa and Australasia, including FLEGT VPA countries.”

The TTF’s objective was to highlight the range of tropical timber available from FLEGT VPA suppliers and their technical performance and aesthetic properties and also to tap designers’ creativity to communicate the FLEGT initiative more broadly.

“People respond to objects and design at a different level than to words on a screen or piece of paper,” said Bedry. “Our aim was to use that to help convey the FLEGT story.”

At the outset, the competition required something of an education process.

“Some designers had heard of FLEGT, but most had quite a limited understanding or none at all,” said Bedry. “We pointed them to material on FLEGT on our website and also took the time to do one on one calls. The objective of our communications on FLEGT is to present its impacts and benefits in the widest sense. First, the assurance a FLEGT licence can give that timber is legally sourced from sustainably managed forest, but also the positive social and economic aspects of the FLEGT Voluntary Partnership Agreement process in supplier countries. In particular, we stress the far-reaching, nationwide transformation these countries undergo in terms of forest governance, stakeholder participation and implementing legality assurance systems throughout the VPA before they get to FLEGT licensing stage. They’re making such progress and changes every step of the way.”

Once they’d been given the full picture, she added, designers commented that they would now consider specifying and using timber from VPA countries.

The sheer number of entrants made picking the winners difficult enough for the seven-strong panel of judges, who were drawn from across the timber and wood products supply chain; from the timber trade, construction, design, architecture and retail. The variety of entries, said Bedry, made it still more of a challenge. They included sculptures, ornaments, structures, furniture, toys and more besides. But eventually the winning six were chosen.

Sheryl Ang called her entry ‘Tree Whisperer’. It comprises a range of highly tactile tree sculptures which emit pulsing beats. These reflect how different species respond to climate change – the faster the beat, the more distressed it is by rising global temperatures. 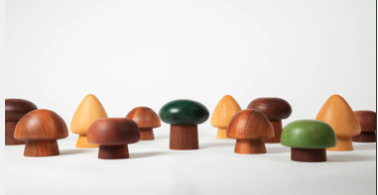 “If we safeguard the life cycles of trees, we go some way to safeguarding the planet,” said Ang. “Global demand for commodities places greater pressure on land and natural habitats.  Implementing legal reform and the measures to enforce this, towards sustainable and responsible forest management frameworks, goes some way to achieving this goal.”

Another winner is the Sapele Sound Pavilion, by Jeremy Yu and Tomos Owen, described as a ‘contemplative space creating a spectacle for the senses’. Sapele, they said, is traditionally used for musical instruments and the pavilion is a ‘soundbox’ playing a ‘soundscape based on the lifecycle of the tree’. The emphasis is on the significance of the forest, not just in regulating climate, but also in social and cultural terms.

Extraction by Julia and Julian Kashdan-Brown comprises a sapele column with horizontal holes drilled through its heart. The piece represents the environmental instability that  results from uncontrolled, unmanaged timber extraction and highlights the need for ‘a drastic reduction in deforestation’. 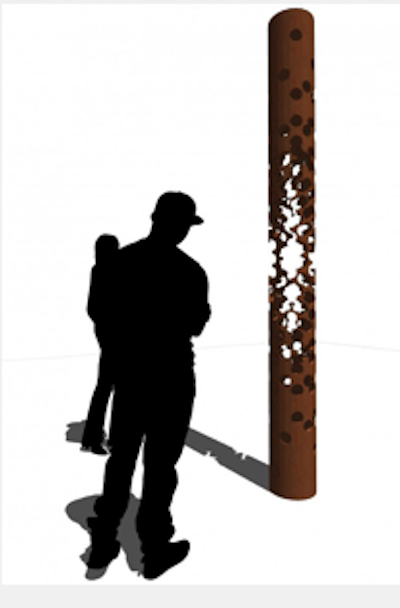 Carbon Print by Joseph Pipal underlines the role of the forests and wood in sequestering and storing CO2 from the atmosphere. It comprises print blocks in meranti, sapele and iroko, made more durable by using the Japanese preservation technique of charring. “At times the scale of the challenge to protect forests and reverse global economic models built on mass extraction of materials seems overwhelming,” said Pipal. “But I’ve been uplifted, as a maker, by the simple realisation that  using sustainably sourced wood can help with the climate crisis.”

Michael Westthorp’s High Tide makes its impact through its starkness. It is a simple teak column marked with the sea level today and that projected for 2021 if man-made climate change continues at its present pace. “Viewers will  hopefully start to think of the wider implication to the city they live in of global climate change,” said Westthorp. 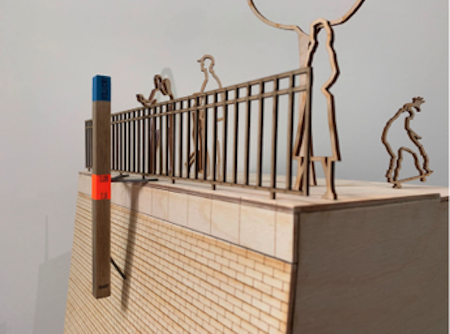 Finally, architect Tom Wilson’s winning entry is a collection of miniature Forest Dweller models in multiple wood species. It’s intended to underline the importance of forests as habitats and in preserving biodiversity. Wilson had previously ‘steered clear’ of using tropical timber, but was impressed with what he’d learned about FLEGT through the competition, notably its ‘governmental level and holistic approach to sustainability, both environmental and economic’.

“I would now perhaps consider the use of tropical timbers more, provided I could be sure of the provenance and legality of the supply chain,” he said. 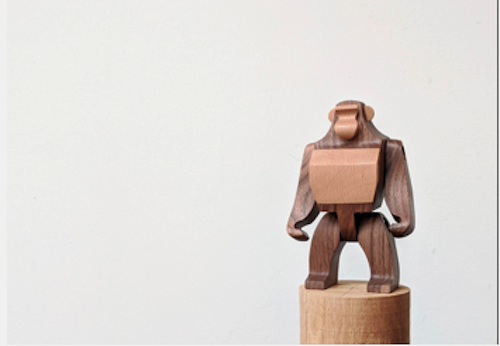 All the timber for the winning designs has been responsible sourced through TTF members. Not all the species on the winners’ wish list were available due to supply disruption caused by the pandemic, so importers provided alternatives that were technically and aesthetically similar. But this in itself underlined the importance of designers and makers specifying the range of species based on performance characteristics, rather than just habit or tradition, to make most sustainable use of the forest resource.

The winning entries are on display at the Building Centre in London for three months from February 12.

“As the Centre will initially be closed to the public due to the pandemic lockdown, the exhibition will be online in the form of a 360-degree tour complete with commentary about FLEGT and interviews with the winning designers,” said Bedry. “Hopefully, if the lockdown is relaxed, people will be able to actually visit later in March and April. The plan is then to take the exhibition on a European tour, in collaboration with colleagues in other national trade federations.”

Such has been the success of Conversations About Climate Change, the TTF is now planning a further design competition. The intention is for the winners’ exhibition to coincide with the COP26 UN Climate Change Conference in Glasgow in November to promote FLEGT and highlight the environmental significance of forests and timber to delegates.

“As part of our FLEGT communications programme, we also hope to have a pavilion in Glasgow with representatives of FLEGT VPA countries in attendance,” said Bedry.