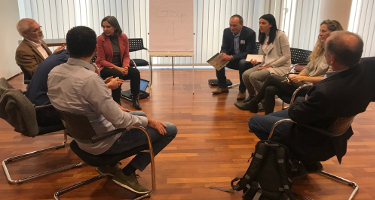 IMM’s role is to use a combination of trade flow analysis and market research to track market impacts of FLEGT-licensed timber and wood products. The market research aspect lay at the heart of its Trade Consultation in Berlin in November.

Even more so than previous Consultations in London and Nantes, and in response to feedback from those events, the emphasis was also strongly on delegate input and discussion. Concise presentations on market trends and influences, timber legality and sustainability issues were starting points for delegate workshops on key topics.

“This event is about your exchange and feedback, which will be relayed to inform future policy development,” said IMM Lead Consultant Sarah Storck.  “It’s about adding a qualitative aspect to the FLEGT discussion, focusing on issues you want to discuss and your views on risks, challenges and opportunities in the tropical timber trade.”

The Consultation took place in Berlin’s Verbändehaus with the support of German Timber Trade Federation GD Holz and the day after its Branchentalk meeting for members.

Attendance was lower than at earlier Consultations and Ms Storck posed the question whether this was partly due to what has been described as ‘FLEGT fatigue’ or frustration with the process.

“This is something we may look into to further inform discussion round these topics,” she said.   At the same time, however, the level of delegate input and participation in Berlin suggested, said one participant, that ‘in the right forum, these issues do generate interest and conversation’.

While there was no presence at the event from end-user industries or retail, delegates represented a range of timber sector and associated interests and standpoints. Besides operators and traders, they included representatives of the German Competent Authority BLE, GD Holz, environmental consultancy, academia, the EFI FLEGT facility and other agencies.

The timber businesses also covered a spectrum of product areas and markets. They comprised market-leading importers of the range of tropical sawn timber, plywood, and solid wood products, including decking. Identifying their key customer sectors, they listed other importers, the merchant trade, wholesalers, joiners, carpenters, and flooring manufacturers, including leading names in the European industry.

The diversity of delegates was further underlined when asked by event moderator Andrew Escott of the Global Timber Forum to identify their main ‘market influencers’.  Among others, they cited private buyers, the design and fashion sectors, architects, engineers and other specifiers, as well as public opinion and NGO activism.

IMM Trade Analyst Rupert Oliver opened discussions on recent trends and dynamics in the European tropical timber sector, and the capacity of the FLEGT initiative to shape trade going forward, with a snapshot of market developments over the last 15 years. The key change in that period had been Europe’s loss of share of the global tropical timber trade, from 34% in 2004 to 20% in 2014, where, bar a temporary upturn in 2015, it had approximately remained since.

Initially tropical timber suppliers lost share to Chinese suppliers, but more recently share was lost to suppliers in European countries, both inside and outside the EU, and in North America.

The question, said Mr Oliver, was what potential the FLEGT platform had to help rebuild Europe’s tropical share and influence.

“Ostensibly prospects for shaping market development are good, with Indonesia and the other countries engaged in the FLEGT process accounting for 75% of European tropical imports,” he said.

Delegates were sceptical about prospects for restoring European share to previous levels. The consensus was that ‘what is gone, is gone’, at least in the short and medium term, due to the interplay of factors which led to sales shrinkage.

Longer term FLEGT was viewed as having potential to at least help slow or halt the slide in Europe’s tropical timber trade. However, until more countries moved more quickly through the VPA process and started FLEGT licensing to grow volumes and variety of licensed products, delegates said they were unlikely to gain significantly greater market traction. “The trouble is at the same time other current and prospective VPA countries are monitoring sales of Indonesian licensed timber,” said a delegate. “They want to see a return on [FLEGT] investment.”

To grow EU market acceptance of FLEGT licensed timber, recognition in government procurement policy was also seen as critical. One delegate said that   FSC timber, rather than FLEGT-licensed timber had even been specified for an EU construction project they had supplied. “Governments must lead the market,” they said. A detailed analysis of the Berlin discussion of drivers of decline and future opportunities for tropical timber in Europe can be in the summary of the first workshop.

Asked by Mr Escott to list key factors in selecting suppliers or sourcing a new product, delegates agreed that primary considerations were the practicalities; could suppliers meet the product specification and deliver on quality and on schedule.

Leading risk considerations in any purchase were also seen as transactional, such as whether pre-payment could be assured. But reputational risk from importing illegal or unsustainable timber was also important and the EUTR and to a lesser extent, given that only Indonesia is issuing them, FLEGT licences were regarded as means of minimising it.

In terms of customer requirements, delegates said price remained a prime consideration and legality of supply was expected as a matter of course.

In a discussion led by Tom ter Horst of the EFI FLEGT facility, delegates addressed sources of information on supply sustainability and legality and the FLEGT initiative. Participants felt there was scope for development of communication for the latter, particularly in conveying FLEGT’s wider impacts.

UK correspondent Mike Jeffree described an IMM report underway into the extent to which European generic timber marketing and communication programmes and campaigns reference FLEGT and the potential for increasing it. So far only one promotional initiative had focused on FLEGT in depth, he said, and he asked delegates for their views on ways of raising its profile.  Some said the combination of FLEGT licensing and certification comprised a potentially powerful marketing tool. Others supported greater emphasis on FLEGT’s ‘on the ground benefits’ in supplier countries. More details can be found in the summary of the second workshop.

The final workshop focused on FLEGT and sustainability, starting with a presentation from IMM German correspondent Gunther Hentschel on the degree to which FLEGT licensed timber from Indonesia is underpinned by sustainability certification, including the country’s PHPL scheme.

Mr Hentschel asked if delegates viewed FLEGT licensing as undermining or complementing certification. One said it depended on the country; in Indonesia they seemed to be operating successfully in tandem.

George White of the Global Timber Forum concluded the Consultation with a preliminary report on his IMM study of European procurement policy, its sustainable timber definitions and recognition of FLEGT.

The range of private and public sector procurement policies and number of potential procurement ‘influencers’, he said, made for a ‘complex policy web’.

“Initial conclusions are that FLEGT can become a more prominent business to business tool, but currently [procurement] policy support for it is variable,” he said. More details are in the summary of the third workshop.