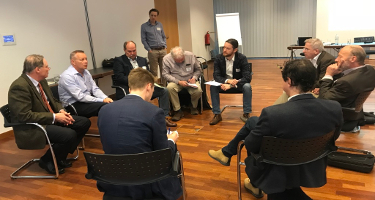 Discussion themes in workshop 2 covered the range of factors that play a part in any tropical timber transaction in the EU and set the context for market uptake of FLEGT licensed product and the relevance attached to the wider FLEGT initiative.

Consultation moderator Andrew Escott asked delegates to rank key issues which shaped their everyday purchasing decisions. Their response was that straight business and commercial considerations come first and foremost.  Top of the list, alongside price, was  ensuring that the supplier can deliver the product in the time frame required. They had to guarantee consistent quality and specification and their communications and supply relationship management were also considered important.

“Depending on individual suppliers and the country in question, frequently the only way to be assured on all these areas is to go there; get people on the ground to see how the company is set up, the quality of their processing equipment and so on,” said a delegate.

Only once buyers are satisfied on all these points does the focus move more to chain of custody, sustainability certification, legality verification and capacity to provide EUTR due diligence information.

“Sometimes these matters are addressed at the same time as other supply issues, but they are immaterial until we know that suppliers can deliver the product we want, when we want it,” said a delegate.

It was agreed a FLEGT licence could be a differentiating factor between suppliers for the buyer, but only where other product criteria were equal, a scenario considered unlikely to arise at least until FLEGT-licensed products are available in greater variety from a larger number of countries.

In terms of risk factors, delegates cited the danger of new suppliers over- promising on quality and production capacity, their general trustworthiness set against the wider level of corruption in a country, as measured by the Corruption Perceptions Index, and financial risk, such as security of pre-payments.

Further down the list came the risk of buying illegal or unsustainable timber and the resulting reputational damage. The EUTR and certification were both seen as means of mitigating this.

“But the ultimate insurance against all these risks is developing long-standing relationships with customers and building trust over a period of time,” said a delegate.

In terms of customer requirements, delegates said they were asked about environmental issues, but it was not ‘generally part of daily business communications’.

“There’s also just an expectation that legality and other matters, such as suppliers’ working conditions and health and safety standards, are taken care of by us,” said a delegate. “Our customers’ trust is in our brand, and as part of that the assumption is that we’ve dealt with these things.”

The most common customer question asked with regards sustainability was said to be ‘is it FSC?’, while the general understanding of sustainability is that a tree is planted for everyone felled, or harvesting does not contribute to deforestation. There was general agreement with one delegate who said that ‘no-one mentions the wider social aspects of sourcing and sustainability’.

Asked by Tom ter Horst of the EFI FLEGT facility which sources of information they relied on for sustainability and legality of supply, and if any information was lacking with regards FLEGT, delegates listed NGO reports and supplier country profiles, such as those from NEPCon, BVRio and ATIBT.

On FLEGT, delegates said they had all the information they needed to explain its role in assuring legality to customers.

“But I think the majority of EU operators would struggle to explain in detail what lies behind FLEGT licensing and the wider VPA process,” said one. “A straightforward summary of this would be helpful.”

The latest IMM study is into generic national timber marketing and communication programmes in the EU and the extent to which they refer to the FLEGT initiative. 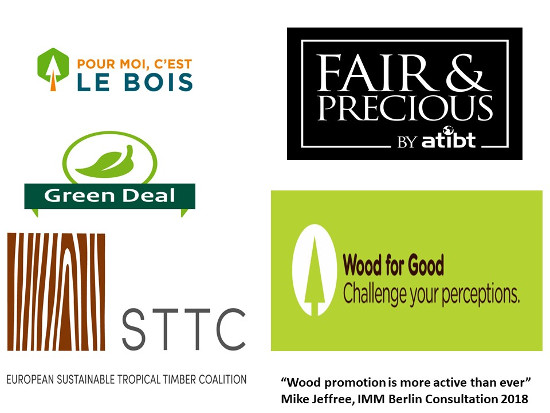 Author IMM UK Correspondent Mike Jeffree said there had never been a more active period for timber promotion, with the combined budget of campaigns across the EU in the millions of euros per annum. These focus on a range of themes, from timber’s status as the only renewable construction and manufacturing material, to the role of a well-managed timber supply chain in maintaining the forest and supporting local communities.

Increasingly highlighted too are timber’s carbon benefits, its value in developing a circular or bioeconomy and its superior performance in life cycle analysis over  man-made, energy-intensive materials.

It might be assumed, said Mr Jeffree,  that this environmental focus of European wood promotion would make inclusion of FLEGT still more likely, particularly given it is increasingly argued that the VPA process incorporates criteria in common with sustainability certification. But with the exception of the UK Timber Trade Federation’s Timber Transformer exhibition in London this year, which focused exclusively on the social, environmental and economic benefits of Indonesia’s VPA process, the coverage has been minimal.

The IMM study is asking leading EU promotional campaigns if they see opportunities for incorporating FLEGT messaging, if not why, and also what information and support would make the task easier.

Mr Jeffree asked delegates if they felt more promotional focus should be on products from VPA countries, given, in the words of one UK importer, that ‘customers buy products, not timber legality schemes’, and also whether FLEGT communication would gain wider currency if, like Timber Transformer, it focused on the social, environmental and economic impacts of the VPA process.

One participant commented that telling the ‘human stories’ behind FLEGT could raise its public profile.