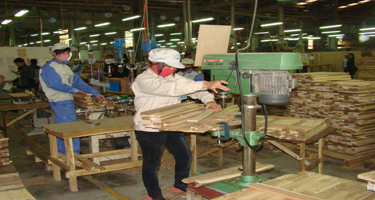 Vietnamese wood-based panel and joinery exporters are among  the beneficiaries of the EU-Viet Nam Free Trade Agreement (EVFTA).

Following approval by the Council of the EU on March 30, the EVFTA was ratified by the Vietnamese National Assembly on June 8, clearing the way for its introduction this summer.

A large proportion of Vietnamese goods under HS code 44, wood and articles of wood; wood charcoal and HS94, furniture, including timber products, are already imported into the EU tariff-free.

However plywood, veneered and ‘similar laminated wood’ panels, particleboard, oriented strandboard and fibreboard are currently subject to duties of 7% or 10%. Under the EVFTA tariff schedule, these will be eliminated over five years. Duty on various blockboard, laminboard and battenboard, now rated at 6% or 10%, will go in between three and five years.

Viet Nam Timber and Forest Product Association General Secretary Nguyen Ton Quyen said he expected the deal to help push the sector’s exports to the EU through the €1 billion mark in 2020 and to accelerate growth in the years ahead .

He also highlighted that Viet Nam’s manufacturers will benefit from the immediate axing or phasing out of tariffs that currently apply to imports of EU timber. These reached €217 million in 2018, up 5% on 2017,  mainly comprising oak, ash, beech and walnut.

He predicted too that once implemented the EU-Vietnam Investment Protection Agreement (EVIPA), also just ratified by the Vietnamese National Assembly, would incentivise foreign inward investment in the country’s timber and wood products manufacturing sectors.

Viet Nam’s biggest European market for wood products by some way is the UK, with exports worth €358 million in 2019. The EVFTA will only apply to it until the end of its transition period to depart the EU at the end of the year, however the UK is now in talks with Viet Nam to secure a similar bilateral trade deal.

“Following the transition period, EU trade agreements will no longer apply to the UK, but  trade continuity agreements will enter into effect as part of the UK’s ability to pursue an independent trade policy,” said a spokesperson for the UK Department for International Trade.  “The UK and the Viet Nam Governments are working together to replicate the effects of the EVFTA to ensure continuity for UK businesses following the transition period.”

Viet Nam’s Ministry of Planning and Investment (MPI) forecasts the EVFTA will help grow the country’s overall exports to the EU by 42.7% by 2025, increasing GDP by 4.6% percent. In the short-term it is hoped it will help the Vietnamese economy regain momentum following the Covid-19 pandemic.

Bilateral trade between Viet Nam and the EU in 2019 was worth €53.4 billion, with €35.6 billion accounted for by Vietnamese exports. This makes the country the EU’s second most important ASEAN trading partner, having overtaken both Indonesia and Thailand in the last few years.