While still dwarfed by domestic production and exports, Indonesia’s imports of timber and timber products are rising in several product groups. Total Indonesian imports of timber and timber products increased 35% to 4.23 million tonnes between 2015 and 2018. In value terms, imports increased 16% to US$1.52 billion. Much of the growth in import quantity has been concentrated in wood (HS 44) products, with a particularly dramatic increase during 2017. 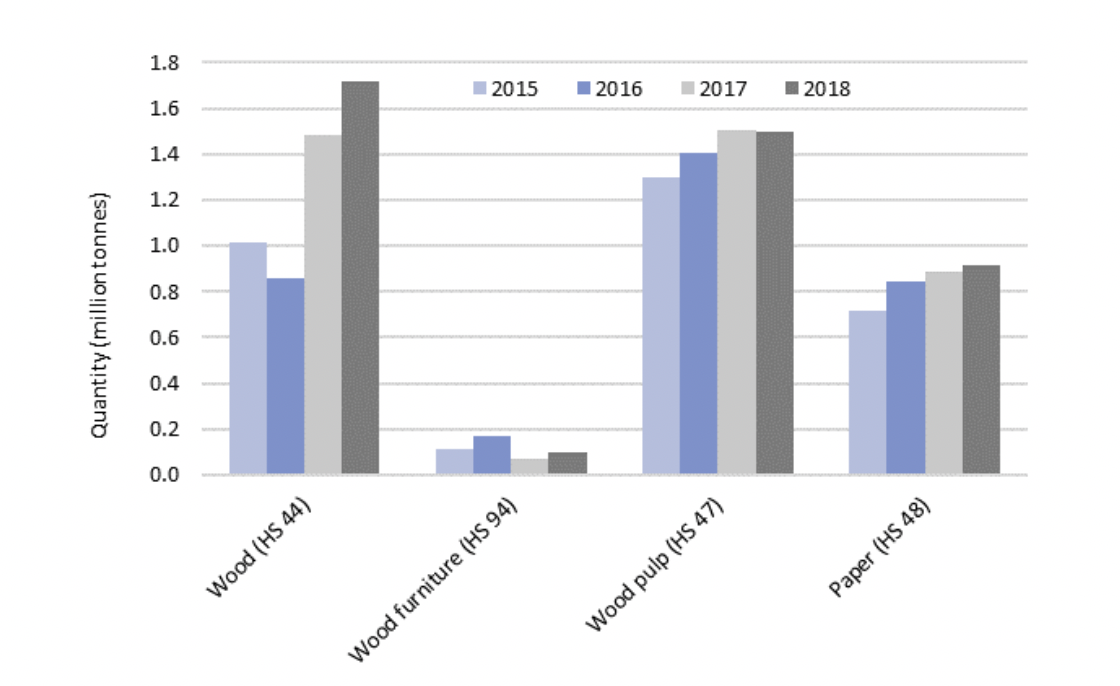 In value terms, the increase in Indonesia’s imports between 2015 and 2018 was led by wood pulp and paper. There was only slow growth in import value of HS 44 wood products and import value of wood furniture was flat during this period (Figure 2). 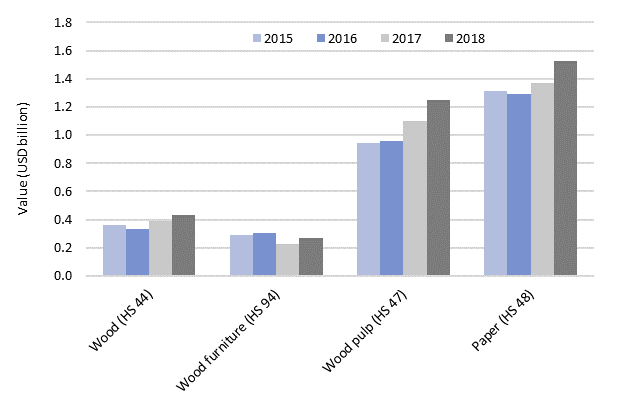 The growth in the quantity of HS 44 wood products is driven by logs and fuel wood of low unit value. Imports of sawn wood and fibreboard were rising slowly between 2015 and 2018 but total volumes are still very restricted. Imports of particle board and plywood were declining during this period. 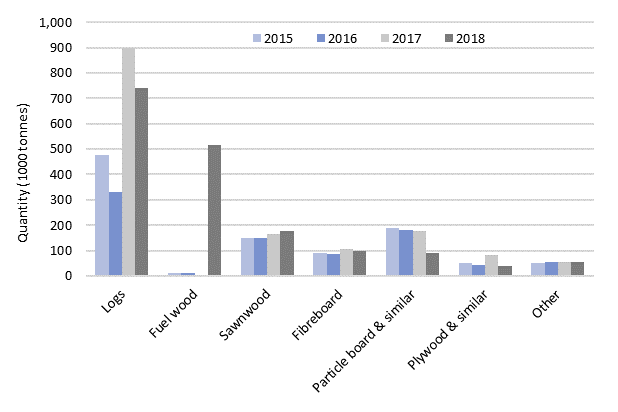 Indonesia’s rising imports of logs between 2015 and 2018 were derived almost exclusively from Malaysia and comprised plantation logs destined mainly for the pulp sector. Chip and fuel wood imports derived from Malaysia, Viet Nam, with a smaller volume from Australia. Sawn wood imports comprised mainly hardwoods from the USA, France and Germany, and softwoods from New Zealand. Panel products were sourced almost exclusively from Thailand, Malaysia and New Zealand. There is little or no evidence to support anecdotal claims of wood from third countries (e.g. in Africa) being transited through Indonesia to obtain a FLEGT licence. 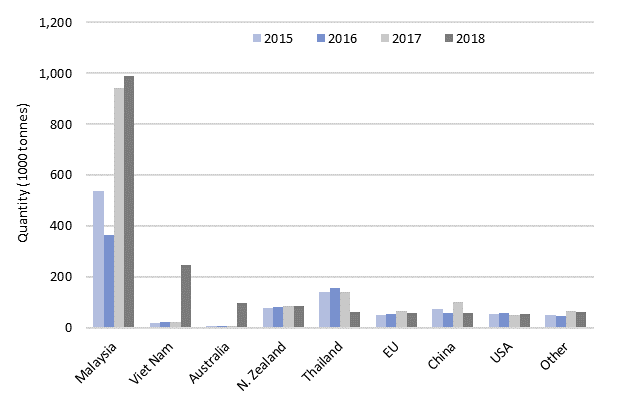 The rise in Indonesia’s wood pulp imports between 2015 and 2018 came mainly from Canada and the USA, the two countries together supplying nearly 1 million tonnes of pulp to Indonesia in 2018. Indonesia’s imports of wood pulp from the EU have fallen sharply in recent years and were no more than 155,000 tonnes in 2018. 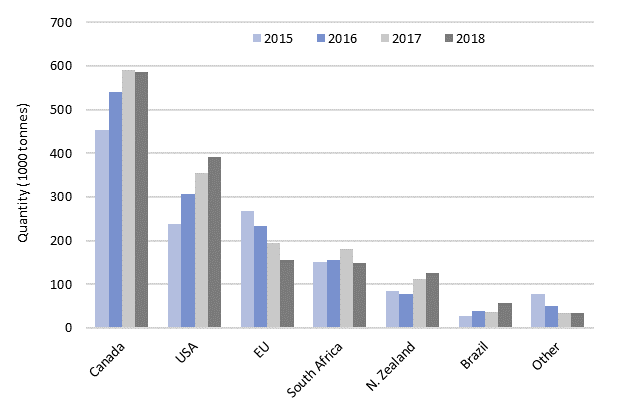 Indonesia’s imports of paper products are sourced from a wide variety of countries, although only in relatively small volumes. The EU was formerly the largest external source, supplying around 150,000 tonnes per year between 2015 and 2018, but recently has been overtaken by China, which supplied 200,000 tonnes in 2018. Only two other countries – South Korea and Thailand – supply in excess of 50,000 tonnes of paper to Indonesia each year. 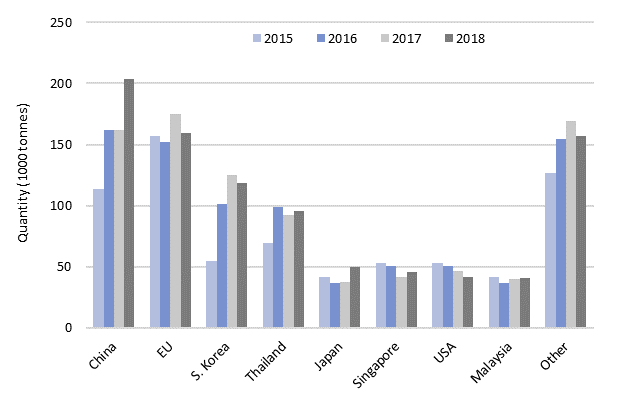 China is the leading external supplier of wood furniture to Indonesia, with sales of $128 million in 2018, 25% more than in 2017 but a decline compared to 2015 and 2016. Other leading external suppliers are Thailand and Japan, although neither country supplied in excess of $40 million to Indonesia in 2018. Total wood furniture imports from the EU were €26 million in 2018 and showed no discernible upward or downward trend in the 2015 to 2018 period. 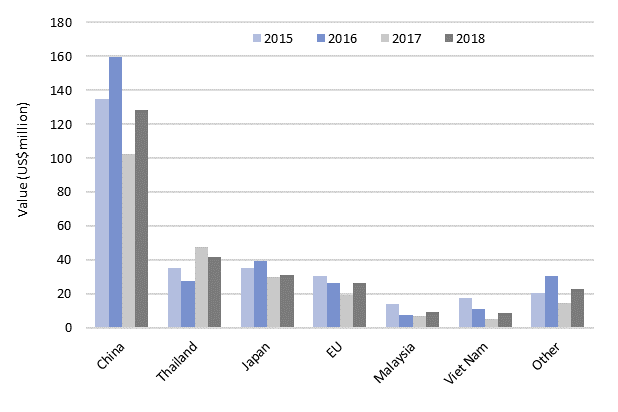 Details on EU Indonesia timber trade, Indonesia’s market position in the EU and its global exports can be found in Chapter 5 of the IMM 2018 Annual Report.