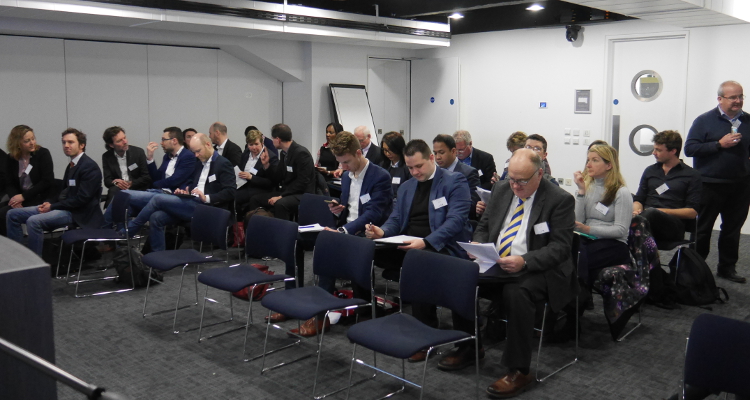 The IMM EU FLEGT VPA Trade Consultation at the London Building centre underlined the range of timber sector stakeholders interested in learning more about the VPA initiative – and where it’s headed in the future.

The 45-strong audience at the March 8 event included timber importers and distributors, furniture suppliers, major retailers, and officers of timber, woodworking and furniture trade associations, including from Belgium and Germany besides the UK. Representatives of UK government, the Indonesian embassy and Ghana Forestry Commission also participated.

The Consultation began with a tour of the UK Timber Trade Federation’s (TTF) Timber Transformer public exhibition, which relates Indonesia’s FLEGT VPA journey and start of licensing. The two, as TTF managing director David Hopkins explained, shared goals, with the exhibition highlighting what lies behind a FLEGT licence in terms of improved forest governance, stakeholder engagement and industry transparency.

But as facilitator Andrew Escott of the Global Timber Forum explained, Consultation and exhibition also had a point of difference. Besides informing them about latest FLEGT VPA developments, plus findings from IMM VPA country trade analysis, the Consultation was also a forum for participants to ask questions and “voice opinions positive and negative about the FLEGT VPA project”.

IMM lead consultant Sarah Storck reinforced the message. “IMM’s intended outputs include improving quality of international timber trade data, especially for the tropical trade, to assess how it competes on the EU market and background factors involved,” she said. “For this, we need trade feedback on current market trends and particularly your opinion on where FLEGT licensing fits in future development of tropical timber markets.”

In her welcome address, ITTO assistant director operations Sheam Satkuru-Granzella also stressed the importance of industry stakeholders’ views to the evolution of the FLEGT VPA initiative.

“Outcomes of IMM events like today’s will be communicated to such bodies as the UN Forum on Forests, FAO Committee on Forestry and International Tropical Timber Council,” she said.

He attributed the EU’s slide in global tropical market share since the 2000s from 35% to 21%, against a backdrop of overall international tropical trade growth, to various reasons. These included tropical timber diversion to other markets and the international economic crisis, which saw ‘erosion of the EU’s tropical market infrastructure’. Also implicated were competition from other wood products suppliers and tropical timber alternatives and the combination of ‘uncoordinated marketing and environmental prejudice’ due to perceptions of tropical wood’s legality and sustainability credentials.

“The question, against this background, is whether FLEGT VPAs can provide the platform to rebuild EU tropical timber market share,” said Mr Oliver.

One strength of the VPA initiative, he said, was the range and availability of product offered by Indonesia and the other 14 countries at various stage of VPA engagement. While the spectrum of market obstacles to tropical timber needed to be tackled, this created potential to deliver significant commercial impact.

“21% of EU tropical imports are from Indonesia, while African VPA countries account for 9% and the others 45%,” said Mr Oliver.

It was too soon, he maintained, to judge whether FLEGT licensing was yet impacting the EU’s Indonesian imports. “However, while it was unrealistic to expect the start of licensing would be a major market inflection point, 2017’s rise in EU Indonesian plywood imports [up 24% to 88,000 tonnes] may in part be a positive story for FLEGT.”

Early conclusions from IMM monitoring of trade trends and gauging of FLEGT licensing and VPA EU trade perceptions, he said, were that FLEGT licences “can underpin tropical product market development over time”.  However various steps needed to be taken to ensure this happened. Initial IMM recommendations   included ensuring ‘consistent enforcement of the EU Timber Regulation’, to which FLEGT licences grant due diligence exemption, plus  ‘appropriate recognition of FLEGT in EU public procurement’.  Improved communication about FLEGT licensing was also vital.

The last point was stressed by IMM lead consultant Sarah Storck, who said its initial market surveys had revealed concerning levels of timber trade awareness of the FLEGT VPA initiative and licensing in some EU countries.

“Around 90% of 126 EU survey respondents were operator importers, but still just 59% considered themselves well aware of the FLEGT VPA process, 40% only fairly aware, and 2% totally unaware,” she said.

She said IMM would continue to track this area, and that it was now also assessing market perceptions in the furniture industry and the financial sector in a forest sector investment study.

DEFRA accepts FLEGT as “evidence of legality and sustainability”

IMM German correspondent Gunther Hentschel addressed the sustainability credentials of Indonesia’s FLEGT VPA and licensing, focusing particularly on its PHPL sustainable forest management (SFM) standard. While little known outside the country, he said, nearly 17m ha of Indonesian concession forest and plantations are certified to the standard and it stands behind a significant proportion of FLEGT-licensed timber and wood products (see panel).

On FLEGT and government procurement, Bernadette Chapman of the UK Department for Environment, said FLEGT-licensed timber was considered “compliant evidence of legality and sustainability due to the SFM verifications that lie behind Indonesian FLEGT licences”.

David Hopkins echoed the view greater awareness of FLEGT and FLEGT licensing was needed and said his organisation was informing members and the market that licences were effectively category A evidence of government TPP compliance.

“Until now we’ve only had the voluntary FSC and PEFC certification schemes as mainstream assurance timber products meet ethical standards. Now we have the regulatory framework behind FLEGT licensing,” he said. “That has to be an advance and we should promote it.”

For detailed results and feedback from the three afternoon workshops:

The next Trade Consultation will take place at France’s Carrefour International du Bois in Nantes on May 31.