Lack of awareness = a key challenge for FLEGT-licensing 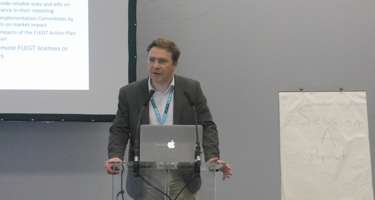 A workshop reviewing purchase dynamics for companies sourcing from Indonesia identified “lack of awareness” as the key challenge for FLEGT licensing in the marketplace. The workshop formed part of the IMM Trade Consultation in Nantes and participants came from both French and Indonesian private sectors. It produced interesting insights; however given the limited number of participants the results cannot be considered representative.

Participants felt that, besides licensing and what it entails, there was a lack of awareness of the FLEGT VPA process in general, the Indonesian VPA in particular, and important aspects such as Indonesia’s mandatory sustainable forest management standard PHPL, which underpins a large proportion of its FLEGT-licensed exports. But neither Indonesian nor French private sector representatives believed there was currently much incentive for companies to invest in promotion due to FLEGT-licensed timber’s limited geographic scope and product range – with currently just one country FLEGT-licensing.

French delegates agreed that FLEGT licenses had made importing timber products from Indonesia easier. They also identified widespread availability of timber from PHPL-certified forests as potentially the second most important opportunity for Indonesian FLEGT-licensing, after assuring “green lane” EUTR compliance. They had not heard about PHPL before the workshop and were interested in further information.

During discussions a general miscommunication between European and Indonesian market players became apparent. Indonesian producers seem to talk about “SVLK” when trying to promote their FLEGT-licensed timber, whereas European importers referred to “FLEGT”. It was felt this could cause confusion and add to the impression the Indonesian system was complex.

According to delegates, FLEGT-licensing is currently not considered a very significant factor impacting purchasing decisions, with the limited geographic scope and lack of awareness further narrowing its potential relevance. Workshop participants identified a combination of price, technical performance/quality and availability/logistics as critical commercial considerations. For retailers, fashion trends were also considered of primary importance. Only after these were factors like legal compliance or environmental and social criteria taken into account. Environmental and social aspects would have to be carefully balanced against commercial criteria for businesses to stay competitive.

When the group compared the Indonesian timber industry against direct competitors, participants highlighted the comparatively high quality as well as reliability provided by Indonesian suppliers as commercial advantages. Compared to purchasing in China, in particular, the risk of intellectual property theft was also believed to be lower.

To demonstrate legal compliance and consideration of social and environmental criteria when sourcing in high-risk countries, delegates said they would, where possible and if not too expensive, give preference to FSC-certified timber. Compared to FLEGT-licensed timber, FSC certification was said to have the advantage of availability from a wide variety of countries, plus widespread brand awareness and acceptance, including among European end-consumers.