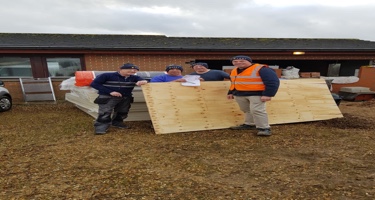 Fort Builders Merchant, a new business just launched by former UK Timber Trade Federation President Keith Fryer, is applying its own ‘Fortified’ eco-label to FLEGT-licensed and FSC and PEFC-certified timber without differentiation. The aim is to simplify and cut the cost of legality and sustainability assurance.  IMM interviewed Mr Fryer on the company’s innovative move.

IMM: You were previously co-owner and director of successful London-based timber and builders merchant T. Brewer.  What was its policy in terms of ensuring and communicating legal and sustainable sourcing  and what were their benefits and drawbacks as far as you were concerned?

Keith Fryer: We were at the forefront with chain of custody (CoC), in part because our business was centred on London, which has high demand for it. We wanted to make sure customers could sleep at night, knowing they had every box ticked. We broadcast our position very widely and worked with architects, specifiers and any others we wanted to engage, to promote CoC. It set such a positive position. But we would hit frustrations over some CoC policies, particularly when customers opted for an ‘FSC Only’ position, which makes procurement of the right product specification unnecessarily difficult, without improving legality or sustainability. This has been a long-standing bugbear of mine; the politicisation and turf war battles between the two main certification bodies. They have not added any benefits, just negatives.

The 2012 Olympics was a great example. The building process initially used FSC and PEFC products, rating both as equal. The approach resulted in great products, great value and superb service. But the games organisers then switched to FSC only and it caused utter chaos.

The greatest problem was the inability to put FSC and PEFC goods in one pile and sell them as legal and sustainable. That meant we had to separate products by scheme, which also reduced options when reordering, which in turn diminished quality, availability and price.

IMM: At your new business, Fort Builders Merchant, you have decided to take a new route; to supply FSC and PEFC-certified and FLEGT licensed timber, but undifferentiated and all under your own ‘Fortified Timber’ label signifying assured legality and sustainability. Can you explain how this works?

KF: The process is simple. We have an annual audit against our ex-stock timber products. These are all procured with a FLEGT licence, FSC or PEFC certification. Our view is that any of these procurement lines default to legal and sustainable, so we can instantly make a fully legitimate claim accordingly for every piece of timber we sell. It is easy to do, we have almost no extra administration costs and most importantly it means customers get what we feel are all the important points covered: legality and sustainability assurance, quality, specification, service and price.

IMM: What what was the wider background to your decision to adopt this strategy?

KF: We have built Fort to be a 21st century business, with operating systems that look forwards, using increasing levels of IT to reduce operating costs. In line with this, we wanted a streamlined, efficient approach to legality and sustainability verification. I had become increasingly infuriated about the way the timber industry has been used as a cash cow by a huge range of entities in this area, each creaming off money, while giving little back. Since the advent of CoC we’ve seen no increase in forest certified by FSC or PEFC. They’ve sorted the low hanging fruit, certifying mainly temperate forests, and now it feels that they want to increase their influence and income by constantly increasing the administrative burden. Auditing is becoming a farce, with non-conformances issued for the most petty reasons; constant rule changes make it hard to keep up, but none of it seems to give any gains to either end of the supply line. Against that backdrop we decided that Fort needs to give its customers security, without all the unnecessary complexities and burdens.

IMM: What is the auditing process behind the Fortified label?

KF: Again, it’s  very simple. We check our suppliers against the relevant databases to ensure that their FSC/PEFC certification is current and mandate them to supply all ex-stock items.

In the case of FLEGT-licensed goods we require proof the licence is valid from the supplier. Purchase orders are raised. From there we just work on the same basis as any other CoC chain, checking the documentation. An annual audit will be made to check these transactions. In the case of non-stock items we will start by attempting to source on the same basis, but if this is not possible, we will advise customers accordingly.

IMM: What would you say are the benefits for your  customers of the Fortified label?

KF: Basically we’re providing a simple way of proving legality and sustainability. We cannot pass on a CoC, but in our area the requirement for specific CoC is so low that this is more than adequate.

IMM: Do you think it will have branding and image benefits for Fort Builders Merchant?

KF: We’re not sure whether it will or not. But the real purpose for Fort is to have a clear explanation for customers that they can hand onto their clients.

IMM: Did the fact that the UK government, uniquely in the EU apart from that of Luxembourg, accepts FLEGT licensing as evidence of legality and sustainability on a level with PEFC and FSC certification also influence your decision?

KF: Yes. In fact, in my opinion FLEGT holds to a higher standard than FSC or PEFC. I think we should view them like financial securities. FSC and PEFC are corporate backed securities. FLEGT is government backed. Ultimately it’s stronger.

IMM: Do you think there is potential for other companies to adopt Fort’s approach?

KF: We really do hope so. We want others to consider this, either as a legitimate verification process, or as an intermediate step towards full-blown CoC. We want to help other businesses to lower their operating costs and improve their ability to source legal and sustainable products more easily, thereby improving the chances for better specifications and quality due to greater availability.

IMM: What has been the initial reaction of your customers ?

KF: We’re still at a very early stage to give any hard data, but we know that most Customers only take a mild interest. It will only become of real interest when their clients either make enquiries, possibly retrospectively, or specify legality and sustainability. In those instances we can give them that complete assurance. Obviously if they insist on a specific CoC then we will be unable to supply, but we reckon that will be extremely infrequent.

IMM: What is your wider view of the potential of the FLEGT VPA initiative and FLEGT licensing – and do you feel they are sufficiently understood in the timber trade?

KF: FLEGT Voluntary Partnership Agreements (VPAs) with supplier countries have a range of benefits for them by reducing poor practice, making their timber more marketable and adding value to their forests. It also shows the EU taking responsibility and provided it maintains a strong stance on the initiative, combined with rigorous, uniform enforcement of the EU Timber Regulation, exporting countries will see that they need to do on legality and sustainability to get their timber products into the EU. For the UK and wider EU timber trade it provides a supplier-country-wide, government-backed system of legality and sustainability. There’s still a huge amount of work needed to improve awareness of FLEGT in the trade, but that will improve as availability increases.

IMM: You started your career in the UK timber sector over 30 years ago. How has its commitment on and approach to legal and sustainable sourcing developed during that time?

KF :What we’ve seen is a huge change in market attitude. Back then I didn’t really admit what I did when socialising, because it often ended badly, with the assumption that I was a rainforest destroyer. Now it has reversed so much that sometimes timber traders are seen as saviours of the environment (not often, I admit!). We’re essentially doing the same job as we were 30 years ago, but what has really changed is that, through engagement between trade, NGOs and government, we have established and committed to strong regulatory frameworks. We know it’s an ongoing process with plenty left to do. But we now have the mechanisms to facilitate legal and sustainable sourcing and at the same time to demonstrate the trade’s deep-rooted passion for and commitment to good forestry around the world.

Fort is based near Hungerford in the south of England, about 65 miles to the west of London.

It stocks the full spectrum of building products, with its timber range covering principally construction and exterior products.

Mr Fryer was previously co-owner-director of London timber and builders merchant T.Brewer. The business was sold to builders merchant giant Grafton, where he became Timber Products Manager at its Buildbase division. After his period as President, he remains active in the UK Timber Trade Federation and the Confederation of European Woodworking Industries, CEI-Bois.