Overall the EU’s trade in tropical wood and wood furniture products was more buoyant in the first nine of months of 2019 than the same period in 2018. In terms of US$ value, the biggest gains in the market were made by Indonesian products, particularly wood furniture and doors.

Chart 1 shows twelve monthly rolling total US$ value of imports (to iron out seasonal fluctuations) from tropical countries into the EU of all wood and wood furniture products listed in HS Chapters 44 and 94 (excluding fuelwood, wood waste and chips). The 12-month rolling total fell to a low of US$3.99 billion in June 2017 but recovered to US$4.63 billion in August 2019. 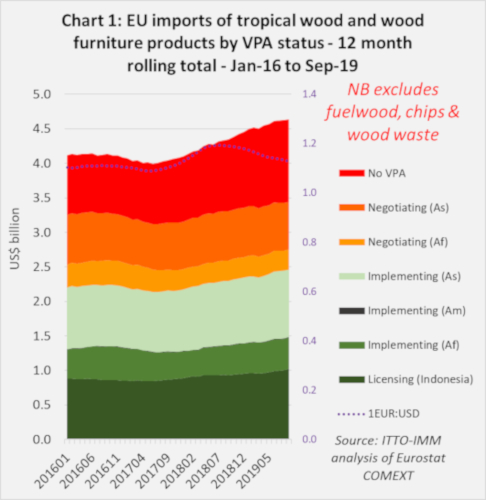 Chart 2 shows that the 12-month rolling total quantity of EU tropical wood and wood furniture imports dipped to 1.95 million metric tonnes (MT) in March 2018, then increased to a peak of 2.21 million MT in June 2019 before slipping back slightly to 2.19 million MT in September 2019. 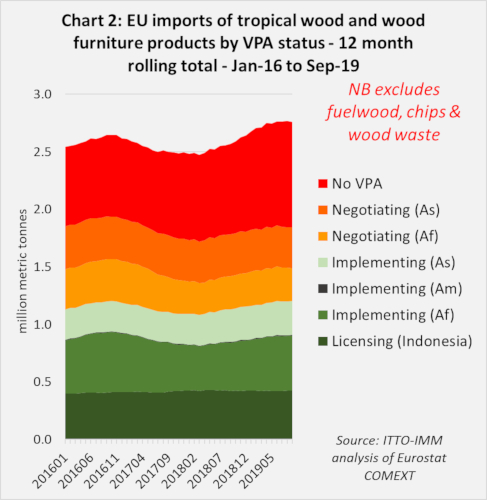 The slowing pace of growth in European tropical wood imports in the third quarter of 2019 coincides with mounting signs of weakness in the wider economy. The latest Autumn 2019 Economic Forecast published by the European Commission on 7th November notes “The European and world economy have weakened over the past year. Europe has seen a sharp slowdown in external demand and a contraction in manufacturing, which is starting to spill over to other parts of the economy”.

The Forecast goes on to observe that “the fact that growth is no longer expected to rebound meaningfully in the next two years is a major shift compared to previous forecasts and is based on the assessment that many features of the global slowdown will be persistent.”

Similarly, the IMF’s latest forecast for European economic growth, also published in November, emphasises downside risks that could lead to weaker growth in 2020: “amid high uncertainty, there are several risks to the outlook, including Brexit-related disruptions, intensifications of protectionism and related uncertainty, abrupt declines in risk appetite, and rising geopolitical tensions”.

In tonnage terms, EU imports of wood and wood furniture products from Indonesia registered only a minor change throughout the whole period from January 2016 through to September 2019. The 12-month rolling total, which was static at around 410,000 tonnes in 2016 and 2017, stabilised at a marginally higher level of 420,000 tonnes in 2018 and 2019.

However, the import trend for Indonesian products is much more positive in US dollar terms. 12-month rolling total imports from Indonesia increased by 21% from US$840 million in June 2017 to US$1.02 billion by September 2019.

Of FLEGT licensed products from Indonesia, there was strong growth in EU import value of wood furniture, plywood, mouldings/decking, and wooden doors during this period. There was a particularly sharp upturn in imports of Indonesian wood furniture between April and September last year. Imports of charcoal, which is not subject to FLEGT licensing, also increased significantly (Chart 3). 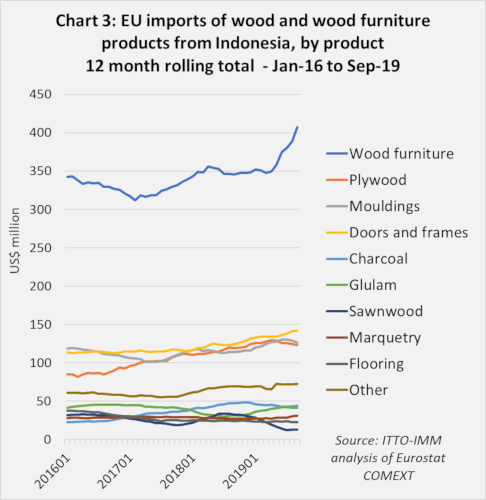 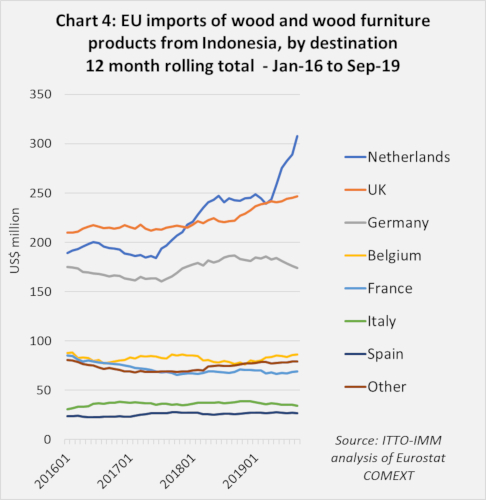 The growth in EU imports of Indonesian plywood is particularly encouraging against a background of intense direct competition from Russian birch plywood products. IMM contacts with EU plywood importers suggest that prices for Russian products are highly competitive due both to low prices for birch logs in Russia and continuing weakness of the Russian rouble.

It remains to be seen whether removal of Indonesia’s GSP status from 1st January 2019 will have any significant impact on EU imports. It will have no effect on trade in those products like decking/mouldings and most wood furniture which are zero tariff irrespective of GSP status.

However, the loss of GSP status means higher tariffs for plywood, veneers, and planed, sanded and finger-jointed sawn timber this year. For plywood, probably the most significant Indonesian wood product influenced by GSP status, the tariff has increased from 3.5% to 7%.

EU wood imports from Cameroon have been very volatile in recent years (Chart 5). 12-month rolling total imports from Cameroon, which increased sharply to US$338 million in December 2016, fell to a low of US$257 million in March 2018. In the following months, imports recovered much of the lost ground to reach US$305 million in the year ending July 2019 before easing slightly in August and September last year. 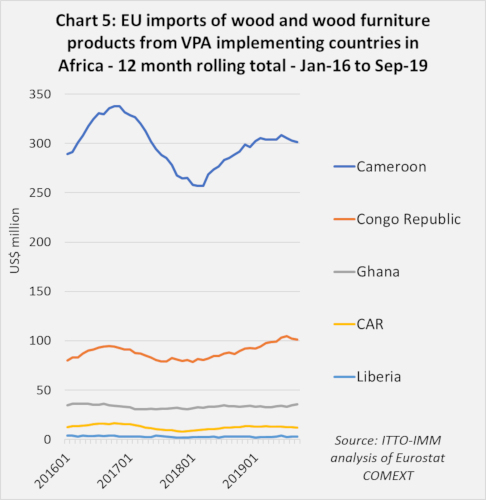 Most EU trade with Cameroon comprises sawnwood destined for Belgium. The volatility is due to supply side problems, notably shipment delays caused by bureaucratic red tape and poor infra-structure after many years with little or no investment at Douala, the country’s only major port.

EU imports from the Republic of Congo (RoC), comprising sawnwood, logs and veneers, were recovering slowly in 2018 and 2019, rising from an annualised level of US$78 million in January 2018 to a peak of US$104 million in August 2019 before easing back to US$101 million in September 2019. In the last two years there has been particularly strong growth in Belgian imports of logs and sawnwood and French imports of veneers from the RoC.

EU imports from Central African Republic (CAR), recovered gradually from an annualised low of US$8 million in November 2017 to US$12 million in September 2019. While EU imports of sawnwood from CAR, previously destined mainly for Belgium, have fallen to negligible levels, imports of logs have been rising slowly, mainly into France, Portugal and Belgium.

EU imports from Liberia are negligible and have hardly changed in recent years, averaging around 5,000 tonnes with value less than US$3 million per year.

EU imports of wood products from Vietnam, the only VPA implementing country in Asia, which were flat in 2016 and 2017, increased consistently throughout 2018 and in the first nine months of 2019. 12-month rolling total timber product imports into the EU from Vietnam were US$980 million in the year ending September 2019, 6% more than the previous 12-month period.

While EU imports from Vietnam continue to be dominated by wood furniture (HS 94), much recent growth has been in imports of a range of other wood products in HS Chapter 44, notably charcoal and other energy wood, plywood, laminated wood, planed sawnwood, and doors (Chart 6). 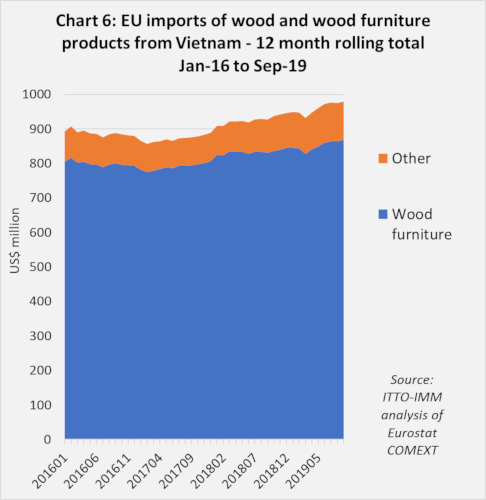 EU furniture imports from Vietnam are still mainly destined for the UK, although much of the recent growth has been driven by France and the Netherlands. The increase in imports of HS 44 wood products from Vietnam is also driven by countries other than the UK, notably sawnwood to France, plywood to Germany, laminated wood to Belgium, and fuelwood to Denmark and, more recently, Sweden.

The two countries in Latin America that recently completed VPA negotiations, Guyana and Honduras, are currently only small suppliers of timber to the EU. Imports have been rising from Guyana but falling from Honduras (Chart 7). 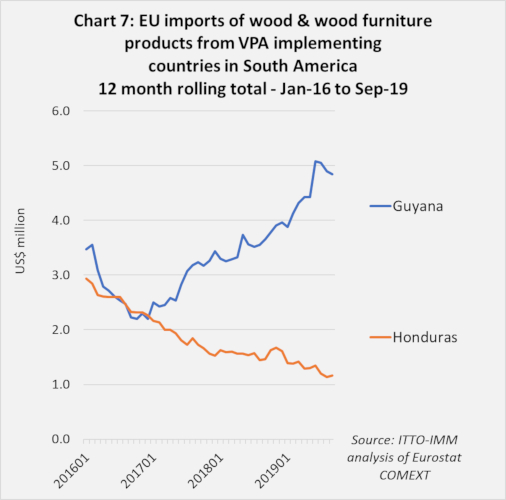 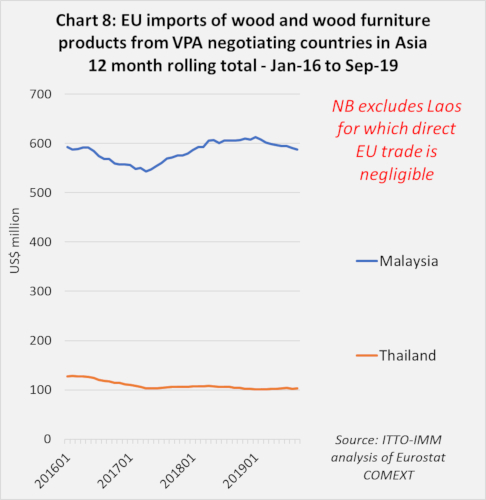 In recent months, Malaysia has lost ground to both Cameroon and Brazil in the EU market for tropical sawn wood, and to China and Indonesia (and Russia) in the market for hardwood plywood. However, EU imports of wood furniture from Malaysia have continued to strengthen, while there has also been some recovery of EU imports of window scantlings and other joinery products from Malaysia.

EU imports of timber products from Thailand consist primarily of furniture, with smaller quantities of plywood, fibreboard, and charcoal. After a decline in 2016 and the first half of 2017, total EU imports from Thailand were stable at an annual level of around US$100 million between June 2017 and September 2019.

EU imports from Gabon weaken in the third quarter of 2019

Of the three VPA negotiating countries in Africa, Gabon is the largest supplier to the EU (Chart 9). After declining in 2017, EU imports from Gabon between January 2018 and September 2019 were very volatile on a monthly basis but overall, on an annual basis, were flat at around US$190 million. 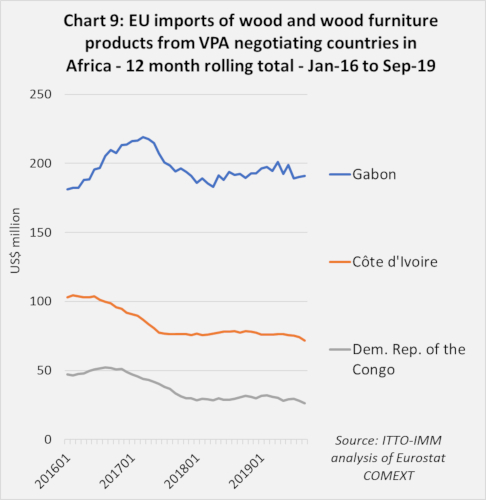 After declining sharply in 2016 and 2017, EU imports from Côte d’Ivoire stabilised at a lower annualised level of around US$75 million throughout 2018 and the first half of 2019. There were signs of a further slowdown in the third quarter of 2019, with trade falling to US$72 million in the year ending September 2019.

While EU sawnwood imports from Côte d’Ivoire have continued to slide, for the first time dipping below US$30 million in the year ending September, imports of veneer from the country have been more stable, standing at around US$37 million in the same period.

EU imports of DRC sawnwood were stable in 2018 and 2019, at an annualised level of around US15 million. EU imports of DRC logs increased sharply in the second half of 2018, to reach US$13 million by the year end, but had a fallen to only US$7.5 million in the year ending September 2019.

EU imports of tropical timber products from countries not engaged in the VPA process continued to make strong gains in 2019. Imports from these countries increased 17% from US$785 million in the year to September 2018 to US$918 million in the year to September 2019. This is primarily due to a continuing rise in imports of furniture from India and tropical hardwood plywood from China, together with a recovery in imports of hardwood sawnwood and decking from Brazil (Chart 10). 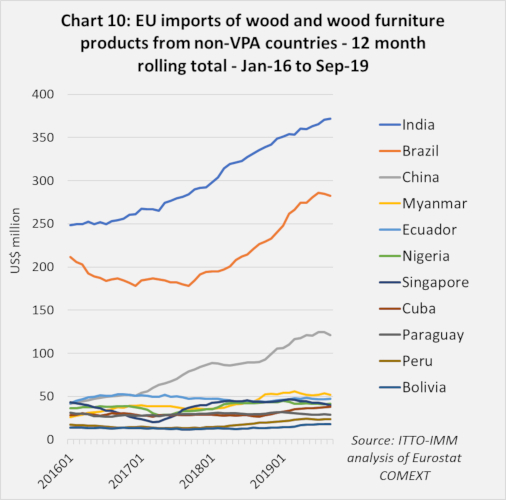 EU wood furniture imports from India have increased consistently from around US$250 million in year ending September 2016 to $372 million in the year ending September 2019. Import growth has been continuous in the Netherlands and Germany, now the two largest EU destinations for Indian wood furniture. Imports into the UK, the third largest destination last year, were rising in 2017 and 2018, but were flat in 2019. Imports in France, the fourth largest EU destination have fallen this year.

There was uninterrupted increase in EU imports of plywood with a tropical hardwood face from China between January 2017 and September last year, with US$ value rising from US$50 million to over US$120 million during this period. Most of this growth has been concentrated in the UK which accounted for two thirds (US$80 million) of all EU imports of this commodity from China in the year ending September 2019. Imports into Belgium, the second largest EU destination, increased sharply in 2017 before stabilising at an annual level of US$20 million in 2018 and 2019.

EU imports of tropical wood products from Brazil, which consist mainly of sawnwood and decking, have risen strongly from US$178 million in the year ending September 2017 to US$282 million in the year ending September 2019. There has been significant growth in imports into all three of the largest EU destinations for Brazilian tropical wood; France, Belgium and the Netherlands. Imports began to slow in the Netherlands and Belgium in the third quarter of 2019 but remained high in France.

EU imports of wood products from Myanmar, after rising from US$35 million in 2017 to US$53 million in 2018, remained at this higher level throughout 2019. Imports from Myanmar comprise mainly sawnwood with smaller volumes of mouldings/decking and veneer.

Imports from Myanmar have continued despite high profile EUTR prosecutions of importers of Myanmar teak (in Sweden and the Netherlands) and the conclusions of the EC’s FLEGT/EUTR expert group (most recently reiterated at their September 2019 meeting) that “it is not possible to come to a negligible risk of illegally harvested timber from [Myanmar], in particular due to a lack of sufficient access to the applicable legislation and documentation from governmental sources”.

From a FLEGT perspective, it is encouraging that Indonesian Licensed products feature so prominently in the league table of the largest gains in EU tropical wood product imports in 2019 (Chart 11). 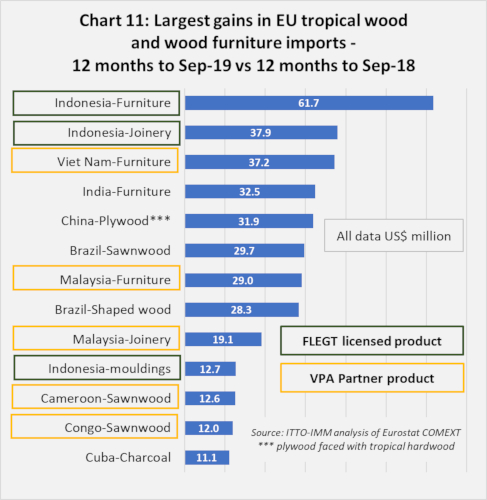 Indonesian furniture led the way with imports in the year to September 2019 being US$61.7 million greater than in the previous 12-month period. Indonesian joinery products were in second place, gaining US$37.9 million in the same period. Indonesian mouldings/decking also made it on to the list of big gainers, adding US$12.7 million.

Amongst VPA countries other than Indonesia, significant gains were also seen in imports of furniture from Viet Nam and Malaysia, joinery (mainly laminated wood) from Malaysia, and sawnwood from Cameroon and RoC.

Less positive from a FLEGT perspective is that two Indonesian product groups – sawnwood and veneer – also appear in the list of the biggest losers in the year to September 2019, although the deficits are more moderate and are dwarfed by those of Malaysia, which suffered a particularly sharp decline in EU imports of sawnwood (Chart 12). 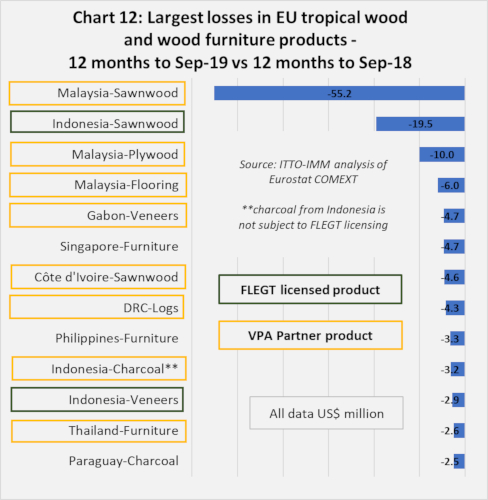