Risks and opportunities – drivers of the EU tropical timber market

The main section of the IMM Berlin Trade Consultation opened with a workshop on trends in EU tropical timber trade. The workshop’s primary purpose was to discuss drivers of market decline and future opportunities for tropical timber in Europe with private sector representatives.

A short presentation by IMM Trade Analyst, Rupert Oliver, set the stage by summarising recent trends in global tropical timber trade and the EU’s changed position in the global trade environment. As shown in the chart below, the EU still was the most important market for tropical wood products globally back in 2007, but has since fallen to fourth place, well behind China, North America and North East Asia. 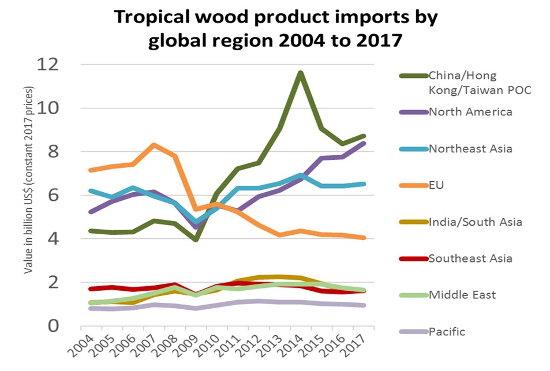 Based on previous research, IMM had identified nine potential drivers of tropical timber’s decline in the European markets (see below). These had already been included for rating according to relevance in the IMM 2018 trade survey. For the Berlin Trade Consultation, the drivers “EU Timber Regulation” and “declining quality” were added for the first time; both had emerged from analysis of IMM 2017 and 2018 trade survey results.

Trade Consultation participants were asked to rate the market drivers according to relevance by placing stickers on the most important factors. They were also asked to add other factors, if appropriate.

The top drivers identified as a part of the exercise were:

With the exception of “declining quality”, all other factors were also considered relevant for the downhill trend in EU tropical timber imports over the last decade. No additional factors were identified.

The German Trade Consultation voting differs only slightly from the rating of drivers conducted as a part of the EU IMM 2018 trade survey in all seven key tropical timber consuming EU countries. “Substitution by temperate wood and composites” was identified as the most important factor also by the 2018 trade survey. Unlike in Germany, the economic crisis and its aftermath held second place in the multi-country survey, followed by “diversion of supplies to other markets” and then again “environmental prejudice and uncoordinated marketing” and “competition from China”. The EU Timber Regulation had not yet been included as a factor in the 2018 trade survey, but will be in subsequent surveys and Trade Consultations, as it has emerged as an increasingly relevant factor over the last year.

Participants in Berlin were also asked to rate a range of potential opportunities for the EU tropical timber trade identified by IMM and to discuss trade expectations. 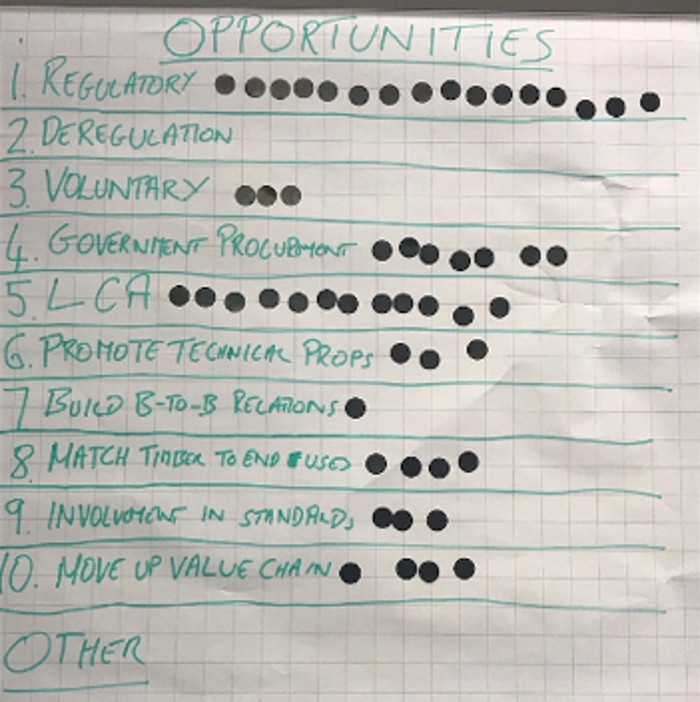 Two factors emerged as the strongest opportunities by far in the rating: “Regulatory” and “LCA”.

“Regulatory” stands for “a regulatory approach involving increased supply of FLEGT-licensed tropical timber linked to consistent and effective enforcement of EUTR to remove illegal wood”. Trade Consultation participants were expecting this strategy to bring long-term benefits to the sector, even though the EU Timber Regulation was currently rated among the drivers of decline. Practically all participants in Berlin saw the EU Timber Regulation as the right approach to improve credibility and reputation of the tropical timber trade. Consolidation in the sector and the concentration of import activities in the hands of a smaller number of expert importers, who have the means to ensure that only legal timber is imported, was also generally seen as a positive development. Not a single participant voted in favour of “Deregulation” i.e. abandoning the EUTR.

A second major opportunity was seen in highlighting/promoting the environmental benefits of tropical timber and underpinning them scientifically through life-cycle analysis (LCAs). Here, traders were also calling for increased regulatory support through government procurement policies. With respect to FLEGT-licensed tropical timber, traders urgently called for an inclusion in EU MS public procurement policies as evidence of both legality and sustainability.

The rating of opportunities was conducted in Berlin for the first time but will feature in future Trade Consultation and surveys.