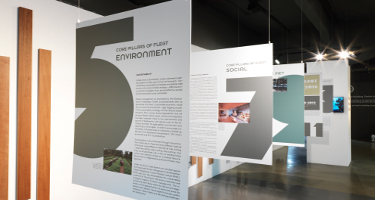 The leading publication for the UK timber import, distribution, specification and end use sectors presents the annual prize in recognition of projects, products and services of special environmental merit and benefit to the trade and its marketplace.

Funded by the UK Department for International Development (Dfid), Timber Transformer took place at the Building Centre in London earlier this year and ran for four months. In that time, UK TTF Managing Director David Hopkins, maintains, it attracted widespread media attention and hundreds of visitors, from architects and engineers, to NGOs and members of the public.

“And the official launch event was attended by UK government ministers past and present, leading figures from the trade, and representatives of Indonesian and Ghanaian embassies,” said Mr Hopkins. “It was a huge success and made a significant impact.”

The project, he added, highlighted once more the importance that the TTF has attached since the outset of the EU FLEGT initiative and EU Timber Regulation (EUTR) to being a central knowledge and communications hub for both.

“Members look to us for information, guidance and support. We’re widely consulted by EU and UK governments, the UK Competent Authority and bodies such as IMM and the European Forestry Institute on these topics and we also get inquiries from the range of specifiers, end users and other industry stakeholders,” he said. “So we view our role as facilitating information flows in both directions, from above and below.”

Timber Transformer, with its focus on a FLEGT VPA’s environmental, social and economic benefits on the ground in the supplier country, also underscored the TTF’s view that there is still limited understanding of the initiative in the wider timber market. 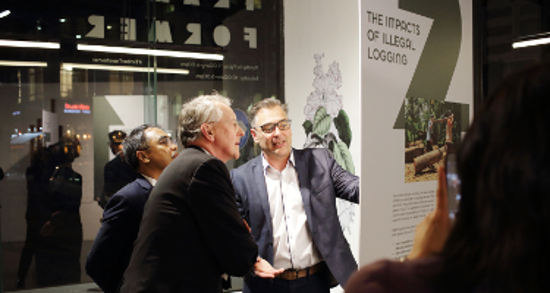 “Those that have heard of it, mainly perceive a FLEGT licence as providing a green lane through the EUTR, exempting you further due diligence – and that’s in the timber trade, including many operators, never mind the general marketplace,” said Mr Hopkins. “Basically, it’s seen as a free pass through customs and for many that’s it. There’s generally low awareness of the wider process of a FLEGT VPA, its impacts and what supplier countries have to go through to start FLEGT licensing.”

Lack of communication and understanding on these aspects of FLEGT, he added, , limits its marketability.  “It’s a real hindrance as without it FLEGT just doesn’t get the press, industry, policy-making or public interest it deserves,” he said. “Just talking about legality assurance in the abstract doesn’t have the popular impact.”

The TTF has now offered the text to other industry organisations in the EU to mount similar events.  It has also announced that it has been granted additional funding by the Dfid to undertake FLEGT communication and awareness raising elsewhere in the EU itself.