Vietnam’s role as a wood processing hub continued to rise during 2017. Vietnam is increasingly recognised as the primary location in South East Asia for supply of mid-range interior furniture and has become a major competitor to China in this sector. Vietnam’s imports of wood products are rising to supply the export-oriented furniture manufacturing sector as well as rising domestic demand.

Vietnam is a significant importer of wood products from other countries involved in the FLEGT process. According to Vietnam government statistics, in 2017, the value of Vietnam’s wood product imports increased 17% to US$214 million from Cambodia, 13% to US$103 million from Thailand, and 0.4% to US$94 million from Malaysia.  These gains offset a 47% decline in imports from Laos, to US$42 million and a 16% decline in imports from Indonesia, to US$18 million.

UN COMTRADE data indicates that the value of Vietnam imports of timber products from Cameroon increased 24% from US$143 million in 2015 to US$177 million in 2016, making Vietnam Cameroon’s second largest export market after China.

Vietnam’s wood product exports have risen consistently in the last decade. UN COMTRADE data shows the value of exports from the country increased more than three-fold from around US$2 billion to nearly US$7 billion in the ten years to 2016 (Chart 1). Vietnam government statistics indicate that exports increased a further 10% in 2018 and were on target to reach nearly US$9 billion in 2018. 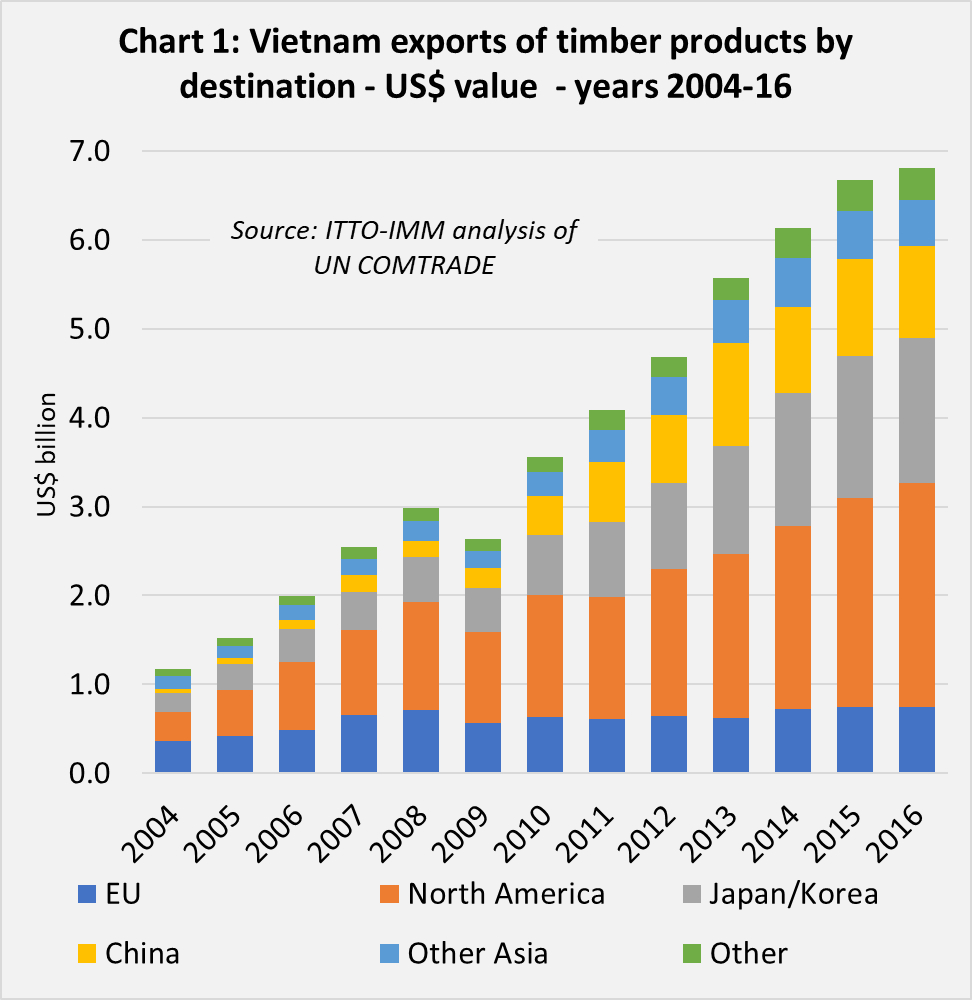 This compares to Vietnam’s domestic wood products consumption that is valued at around US$2.8 billion per year, equivalent to only US$30 per capita and much lower than the global average of US$72. Domestic consumption is expected to increase, spurred on by rapid urbanisation and recent recovery in Vietnam’s real estate market, but at present the wood industry is still heavily export-oriented.

Vietnam wood product exports are dominated by furniture, accounting for 59% of total value in 2016, although exports of fuelwood have been rising and accounted for 18% of total export value in 2016. Furniture exports are oriented particularly towards North America and Europe whereas most fuelwood exports are destined mainly for Japan and South Korea.

On the EU import side, trade with Vietnam has remained remarkably stable in recent years. EU imports from Vietnam remained flat at 270,000 tonnes per year during the period 2015 to 2017. However, Vietnam’s trade with the EU picked up pace in the first quarter of 2018 when imports were 10% more than the same period the previous year. EU imports from Vietnam are dominated by wood furniture which accounted for 82% of tonnage and 88% of import value in 2017 (Chart 2). 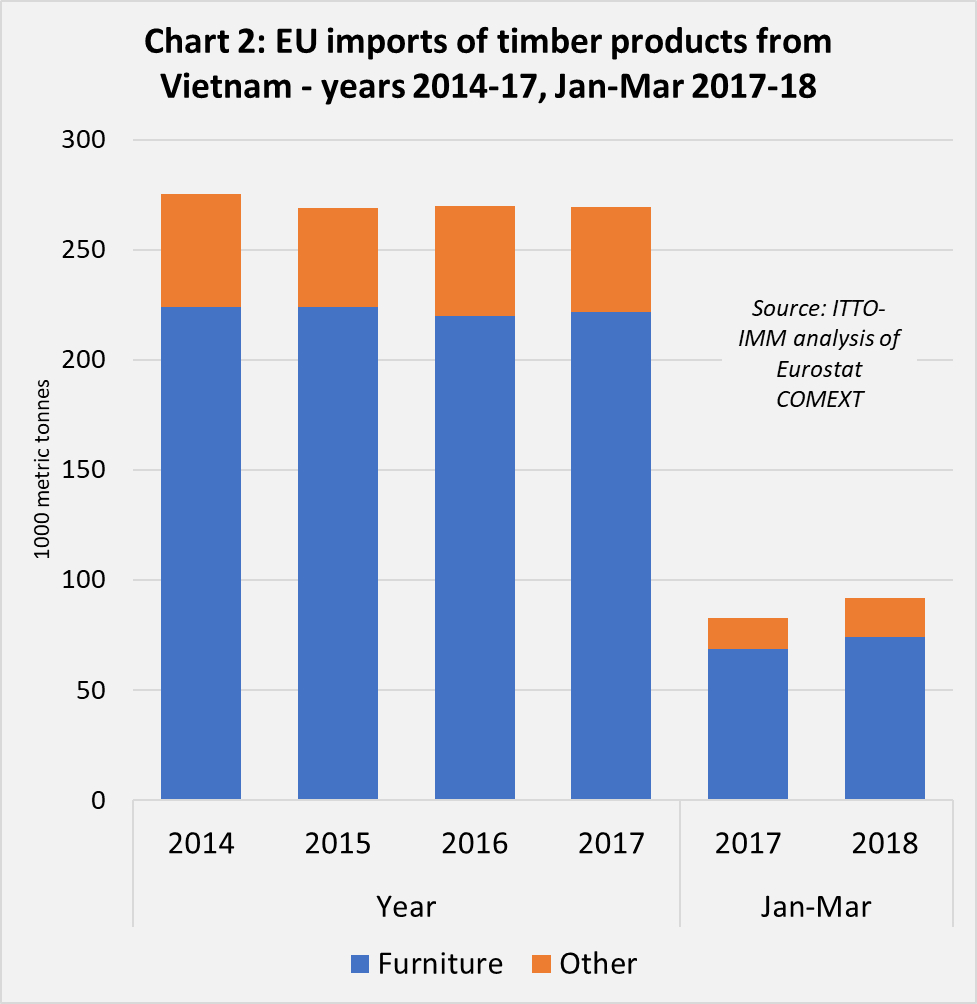 At least 53% of the total value of EU furniture imports from Vietnam comprised products for internal use identified in EU trade statistics as products for dining rooms, living rooms, bedrooms, upholstered seating, and other interior applications. Of the remainder, 18% comprises non-upholstered seating (for both interior and exterior use) and 28% is all other “not elsewhere stated” wooden furniture (Chart 3). A large part of the last group is likely to comprise tables and similar items for exterior use. Much of the interior furniture is likely to comprise temperate hardwoods, with tropical woods dominating the products for exterior use. 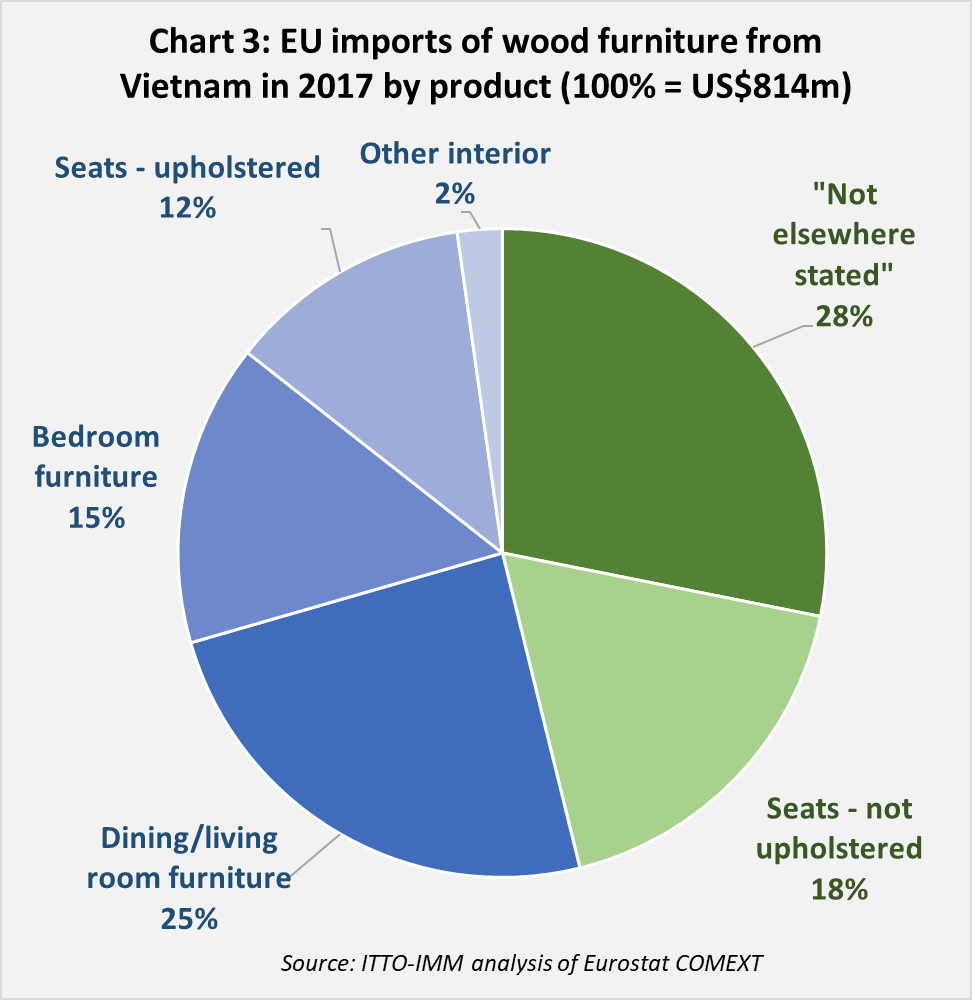 Other than wood furniture, EU wood imports from Vietnam consist mainly of other secondary and tertiary processed products (Chart 4). As for wood furniture, a significant proportion are products “not elsewhere stated” in trade statistics and include a diversity of mainly finished consumer goods destined for retailers in the EU. The small range of paper products imported by the EU from Vietnam are also mainly finished consumer items such as exercise books, cups and cartons. 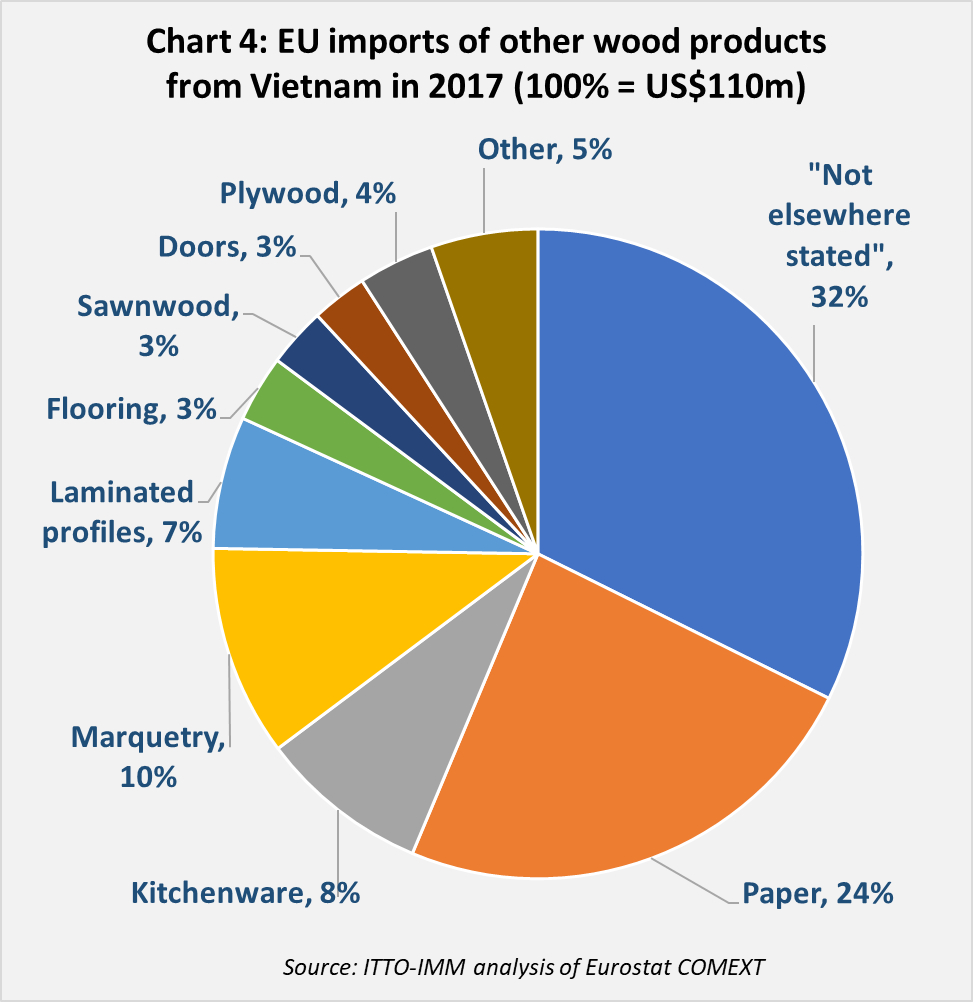