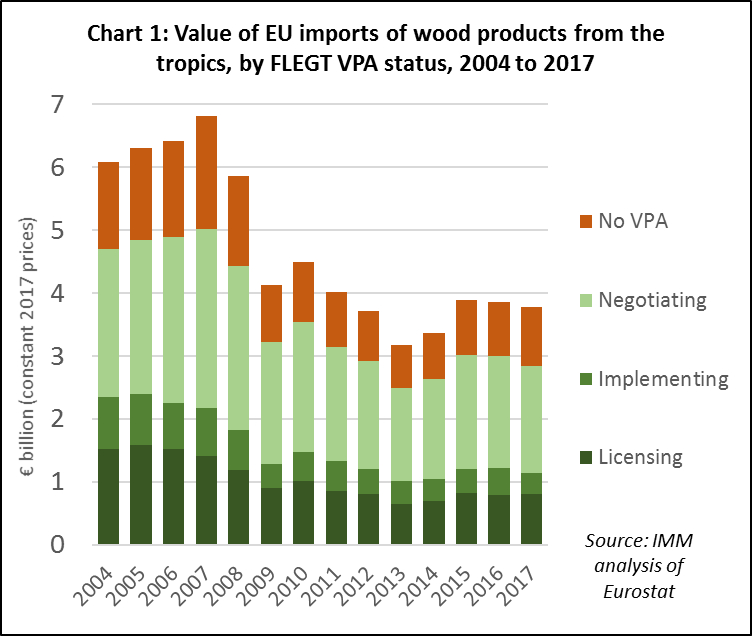 Of the €3.78 billion of tropical wood products imported into the EU in 2017, 21% was FLEGT licensed product from Indonesia, 9% derived from the five African countries that are implementing a VPA (Cameroon, the Central African Republic, the Congo, Ghana, and Liberia) and 45% was from the 9 tropical countries currently involved in VPA negotiations (Côte d’Ivoire, DRC, Gabon, Guyana, Honduras, the Lao PDR, Malaysia, Thailand and Viet Nam).

The share of total EU tropical wood product import value from all VPA partner countries declined from 78% in 2016 to 75% in 2017.

This decline was partly due to a change in the international harmonized system (HS) of product codes from 1st January 2017 which identified a much wider range of timber species as having tropical origin. In practice, this led to a significant quantity of Chinese plywood which before 2017 was identified as consisting only of “other” hardwood as being properly identified as “tropical”.

Another factor behind the decline in share of VPA partner countries in total EU tropical timber product imports in 2017 was a rise in the share of wood furniture imports from India and, to a lesser extent, Singapore, two countries that are not involved in VPA negotiations.

The largest increases in EU imports of timber products from VPA partner countries during 2017, by product group, are shown in Chart 2. From a FLEGT licensing perspective, it is encouraging that Indonesia features prominently in those gains made in the EU market by VPA partners last year, with a significant rise in Indonesian plywood, furniture, charcoal and mouldings trade with the EU. However, the strongest gains were made by Malaysian furniture products last year, and Vietnam also increased furniture sales in the EU in 2017. 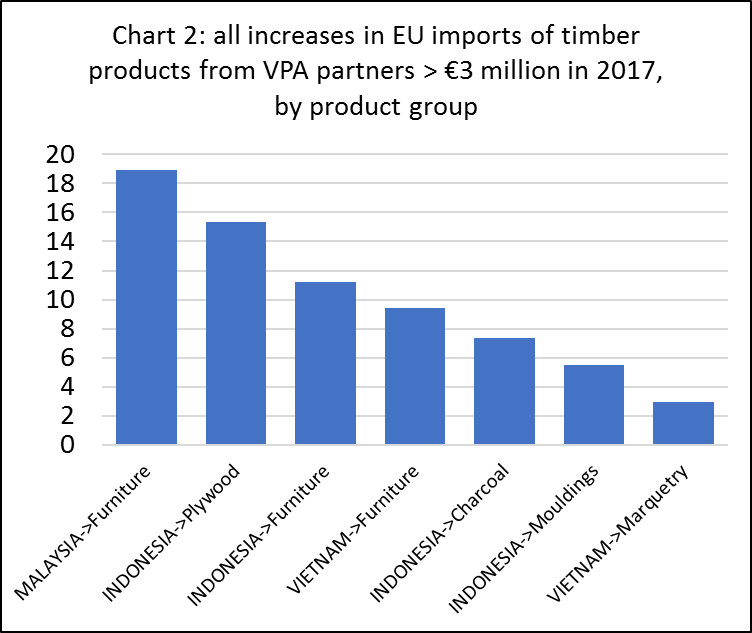 Chart 3 shows that by far the largest increase in a bilateral timber trade flow between a VPA Partner and the EU last year was between Indonesia and the Netherlands. This again might be partly explained by FLEGT licensing, the Netherlands being an EU country where the trade has a particularly long history of commitment to responsible timber procurement policies and which has been active in EUTR enforcement. 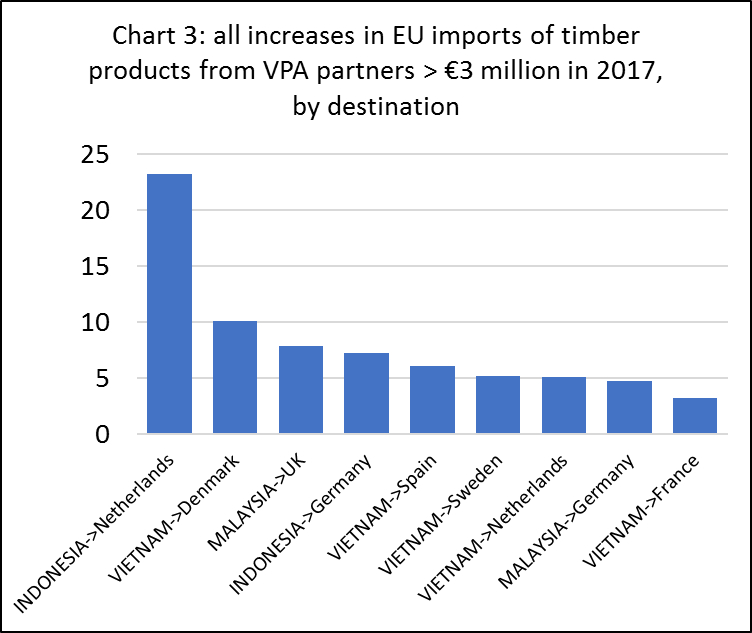 The largest decreases in EU imports of timber products from VPA partner countries during 2017, by product group, are shown in Chart 4. By far the biggest decline was in sawnwood imports from Cameroon. This is understood to be due to the combined effects of overstocking of African sawn timber in the EU in 2016 when a lot of timber that had been delayed for many months arrived all at once, and logistical problems at the Port of Douala in Cameroon. This port is chronically saturated causing severe delays in shipments. The construction of another port has been discussed for years, but with no outcome. 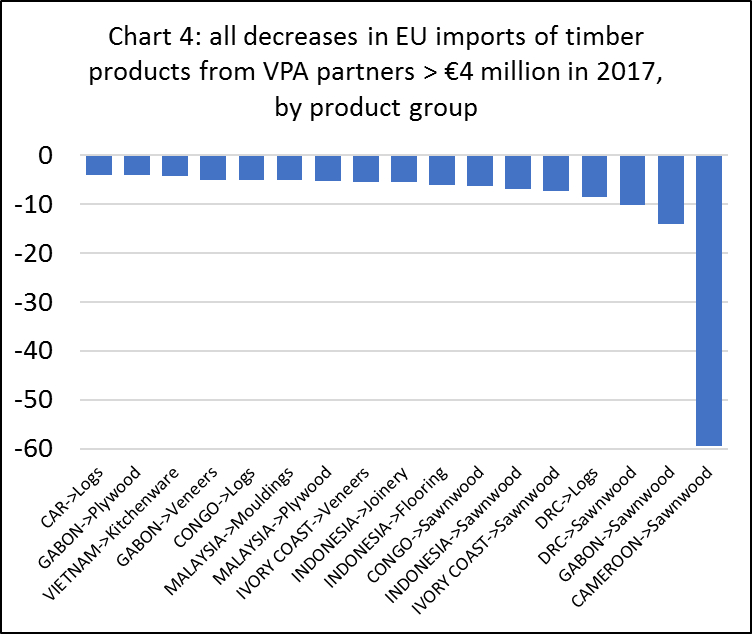 Other than Cameroon, the largest declines in EU imports from tropical countries were mainly in African sawnwood and logs. From a FLEGT licensing perspective, it is disappointing to see a decline in EU imports during 2017 of Indonesian sawnwood (all surfaced products since rough sawn exports are banned from Indonesia), together with Indonesian flooring and other joinery products (mainly doors and laminates for windows scantlings and kitchen tops).

Chart 5 shows that the largest decrease in bilateral timber trade flows between a VPA Partner and the EU last year was between Vietnam and the UK. This was due to a partial switch in UK imports of wood furniture away from Vietnam towards Malaysia last year. This contrasts with the trend in many other EU countries which increased imports of wood furniture from Vietnam in 2017 – including Austria, Croatia, Ireland, Denmark, France, Netherlands, Spain, and Sweden. 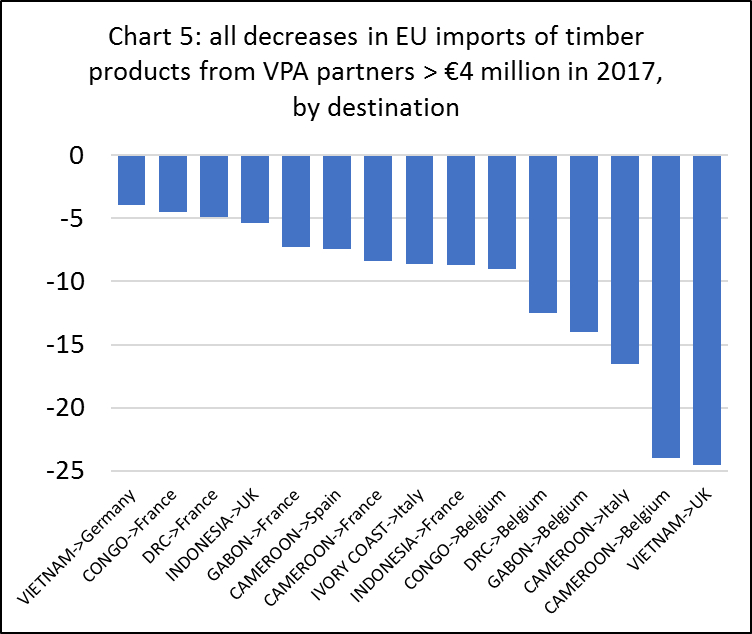 The other large decrease in bilateral VPA Partner-EU timber trade flows last year was between Cameroon and Belgium. This is readily explained as Belgium has become by the largest single importer of tropical sawnwood from Cameroon in recent years. This trend is partly due to volatility in supply and the effects of EUTR, which has contributed to the EU trade in African timber becoming concentrated in a few large companies close to the ports in Belgium with capacity to hold stock, kiln dry the timber where necessary, and undertake due diligence checks.