The UK has experienced a very robust rise in timber trade and consumption this year driven particularly by trends in the construction sector. Lack of containers and a sharp rise in freight rates and other supply side problems associated with the COVID pandemic in more isolated lower income countries, have meant that most of the gains have been made by timber product suppliers in the European region and China. There has been some pick-up in the value of UK imports from Indonesia and other VPA partner countries this year, but this is partly due to the rise in freight costs and overall the share of VPA partners in the UK timber market has declined.

The latest UK Construction Products Association (CPA) Trade Survey shows construction remained in expansion mode during the third quarter of this year, with private housing and repairs, maintenance and improvement leading the industry.  Much of the activity in these sectors has been sustained by government housing policies, an increase in the disposable income across households in the UK, and a homeworking trend that has been driving demand for greater or improved outdoor and office space.

According to the Building Merchants Building Index (BMBI), in the three months between June and August this year, UK sales of timber were at record levels and performing better than all other building material categories. Sales were extremely strong compared both to the same months in the previous year and to 2019, before the pandemic. A statement by the UK Timber Trade Federation issued in September suggests that longer term prospects for timber demand in the UK are good, but short term logistical issues are putting severe strain on supply.

The latest IHS Markit/CIPS UK Construction Purchase Managers Index (PMI) for September suggests that these issues are acting as a drag on the rate of market growth. The Index (PMI) fell to an eight-month low of 52.6 in September, down from 55.2 in August with activity cooling across the housebuilding, commercial and civil engineering sectors. The downturn accelerated as supply shortages led to rapid cost increases. The vast majority of businesses – 78% – said that input prices rose during the month. A combination of ongoing COVID restrictions, Brexit delays and shipping hold-ups were responsible. “The volatile price and supply environment has started to hinder new business intakes as construction companies revised cost projections and some clients delayed decisions on contract awards,” Tim Moore, director at IHS Markit, said.

The severe disruption of supplies from sources further afield – in North and South America, Southeast Asia, and Africa – at a time of strong demand have meant that UK imports of primary wood products from the EU27 have been particularly strong this year (Chart 1). This is despite the UK’s departure from the EU single market and customs union on 1st January 2021 which led to new controls being introduced at the UK border, including increased scrutiny of the plant health and legal status of EU wood products imported into the UK. 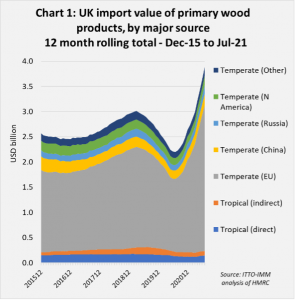 UK imports of tropical primary wood products were rising between 2015 and 2018, but declined sharply from August 2019, even before the onset of the pandemic due to severe overstocking in the plywood sector at that time. Imports continued to fall until August 2020 and then remained flat until July 2021, severely constrained by supply side problems even as demand picked up (Chart 2). 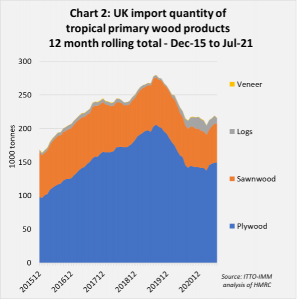 The rise in UK imports of tropical primary wood products between 2015 and 2018 and the sharp downturn between 2019 and 2020 was mainly driven by tropical hardwood plywood manufactured in China rather than by direct imports from tropical countries (Chart 3). 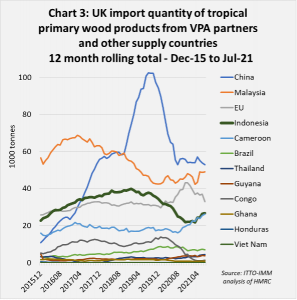 UK imports of primary wood products from Indonesia – nearly all plywood – were rising in 2017 and 2018, the period immediately following the start of FLEGT licensing, but declined throughout 2019 and 2020. Imports from Indonesia have picked up again this year despite severe freight problems but are still well below the heights achieved in 2018.

Of African countries, Cameroon is by far the largest supplier of primary wood products to the UK. UK imports from Cameroon, nearly all comprising sawnwood, were sliding slowly downwards between 2017 and 2020 but have picked up again this year. In contrast, UK imports from the Republic of Congo, also mainly sawnwood, which were rising in 2019 have fallen to near zero since the start of the pandemic.

UK imports of primary wood products from Guyana, almost all sawnwood, increased from a negligible amount in 2017 to around 3,700 tonnes in 2020. Imports so far this year are at around the same level as in 2020.

UK imports of primary wood products from all other VPA partners – Central African Republic, Ghana, Honduras, Liberia, and Vietnam – have been negligible in recent years.

Malaysia is by far the largest direct supplier of tropical primary wood products to the UK that is not a VPA partner country. UK imports of primary wood products from Malaysia were declining continuously between 2017 and 2019, due to tightening supply and under mounting competitive pressure, particularly from Chinese, Indonesian and various non-tropical plywood products. In 2021, after an extremely slow start to the year brought on by pandemic induced production problems and extreme shortages of containers, UK imports of tropical products from Malaysia picked up a little in the second quarter with the arrival in May of the first breakbulk shipments into the UK from Malaysia for nearly 30 years.

Indirect UK imports of tropical primary wood products, almost all sawnwood, from EU countries increased sharply in the closing months of 2020, just before the UK left the single market, but declined again this year. Total UK imports of tropical sawnwood from EU countries were 6,900 m3 in the first seven months of 2021, 25% less than the same period last year and 46% down on the same period in 2019.

Strong rebound in UK imports of SPWPs and wood furniture

The value of UK imports of Secondary Processed Wood Products (SPWP) and wood furniture have rebounded strongly after a dip during the first round of COVID lockdowns in the second quarter of 2020 (Chart 4). 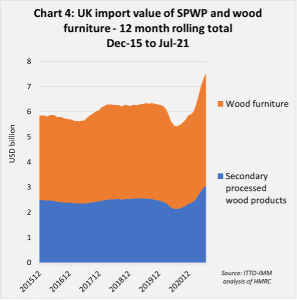 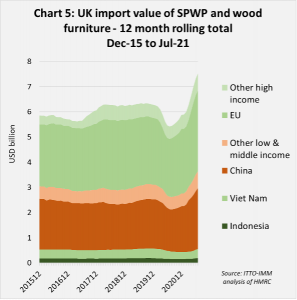 However, there has also been an encouraging recovery in the value of UK imports of SPWPs and wood furniture from Indonesia this year after a sharp fall in 2020 (Chart 6). In the first seven months, UK import value of wood furniture from Indonesia, at USD40 million in 2021, was up 50% compared to 2020 and only 1% down on the pre-pandemic level in 2019. Similarly UK imports of Indonesian joinery products, mainly consisting of doors, were USD78 million in the first seven months of 2021, 58% more than the same period last year and 31% up on the same period in 2019. 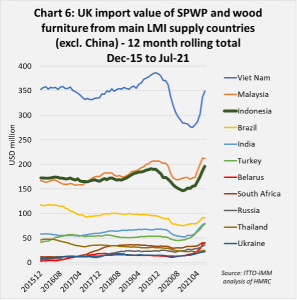 The arrival of the first breakbulk shipments into the UK in the second quarter this year gave a small boost to imports of Indonesian decking products which had ground to a halt due to lack of supply and containers in the second half of 2020. Imports of 1,800 tonnes of decking from Indonesia in the first seven months this year were 6% more than the same period in 2020, but still down 60% compared to 2019.

In the first seven months, UK import value of wood furniture from Vietnam, at USD214million in 2021, was up 41% compared to 2020 but 6% down on the pre-pandemic level in 2019. UK imports of joinery products from Vietnam (mainly laminated products for kitchen and window applications) made strong gains in the first seven months of 2021, but from a relatively small base. Imports of USD9 million from Vietnam were 76% more than in the same period in 2020 and 60% more than the same period in 2019.