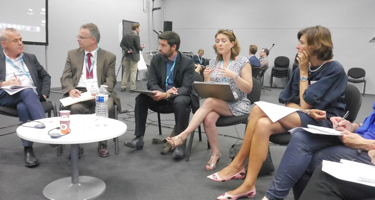 The establishment of FLEGT VPAs with Central African timber producers has been a welcome and positive development, with longer term potential for facilitating trade with EU customers. However, to date the fact that African countries have signed VPAs and are hopefully progressing towards their full implementation and ultimately FLEGT licensing, has not impacted on day-to-day business. Currently EU operators still feel they are having to put suppliers in VPA-engaged African countries through as searching due diligence as ever to comply with the requirements of the EU Timber Regulation, and this can be a time-consuming, arduous business.  If the VPA process prior to FLEGT licensing can in anyway simplify or streamline EUTR due diligence procedure, it is not sufficiently explained or understood in the marketplace.

These were among the key conclusions of the Session B Discussion Group at the IMM French Trade Consultation looking at FLEGT impacts on Central African producing countries.

It was agreed that FLEGT licensing has made timber and wood products trade with Indonesia easier, not only through licensed products being allowed access to the EU market without further EUTR due diligence, but in terms of more open exchange and dialogue on legality issues.

However, said operators, the fact that African countries are in a FLEGT VPA seems to make no difference in satisfying DDS procedure to date; it was just as difficult to find out what documentation is needed as proof of timber legality and then to obtain it. Operators also said they still felt in need of more detailed guidance on EUTR due diligence.

Due diligence based on long-term relationships and trust

So essentially, said operators, African VPAs have not (yet) changed their industry’s key route for securing legal supplies; that is to foster long-term relations with suppliers and develop communication, understanding and trust. This can be a slow and difficult process, and sometimes requires suppliers being told, if they cannot supply the specific evidence of legality required, they won’t secure the contract.

At the same time, operators said they do not want to lose long-established supplier relationships and only when companies demonstrate over time that they cannot or are not willing to move forward on legality issues should ties be cut.  Some importers, it was felt, had become too risk averse and moved away too quickly from sourcing from higher risk suppliers or whole countries due to the EUTR and due diligence. This was regarded as a ‘shame’ because it ‘let down those suppliers who could progress and upgrade the [overall legality] performance of a country’.

It was also highlighted that if too much pressure and bureaucracy was imposed on supplier countries, whether they were engaged in VPAs or not, they could ‘easily turn away from customers in Europe to trade with Asian buyers (Chinese and Vietnamese for example), who have few or no legality requirements’.

Supporting suppliers’ transition from raw material exporter to value-added semi-processed or finished wood products producer was also suggested as a route to consolidating relations with VPA countries.  However this was a long-term process requiring not only ‘investment capital, but also a change in mind-set’.

Another way forward, it was suggested was for groups of operators which source from the same suppliers in African countries to collaborate and put the latter through a shared due diligence procedure.  That way suppliers would not have to repeat the process, with minimal differences, for different EU customers.

The CA representatives acknowledged that they undertook the same type of checks on timber imports, whether or not the supplier was engaged in a VPA or not.

They also said they did not work to a “standard EU-level checklist”, but instead met with counterparts in other Member States to ensure a consistent approach.

They said their controls were informed by timber volumes involved and perceived levels of supplier country risk and that they were not unduly influenced by NGO views or reports.

They added that third-party SFM certification generated trust in a supplier and [while not offering a green lane through the EUTR], made controls easier.

Discussion group participants said that operators were often overly focused on FLEGT licensing as the ultimate objective of a VPA, and did not pay sufficient attention to progress, such as in forest governance and transparency, made by suppliers as they advance through the VPA process.