The final session of the IMM Berlin Trade Consultation focused on private sector green procurement and its recognition of FLEGT as well as the Indonesian licensing system and sustainability. 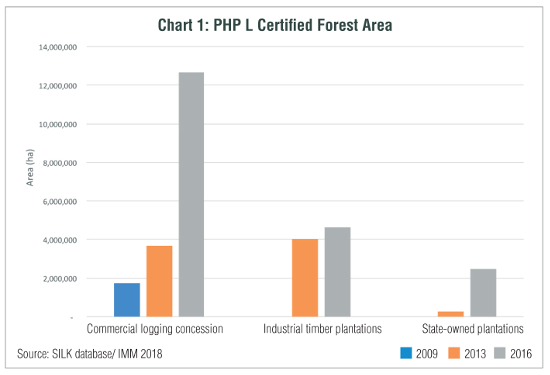 Mr Hentschel opened with an examination of Indonesia’s PHPL sustainable forest management certification system. Little known outside the country, it was introduced in 2003 and comprises categories for natural, private plantation, ecosystem restoration and state-owned plantation forest. It currently covers 10.9 million ha of commercial logging concession and 5.7 million ha of plantations, with a target to increase that to 22-23 million ha.

Other SFM certification schemes operating in Indonesia include the FSC and FSC controlled wood systems, which cover respectively 3 million ha and 2.8 million ha, the Ministry of Forestry backed LEI standard, which accounts for 2.6 million ha, and the PEFC-endorsed IFCC scheme, which covers 3.6 million ha of plantation (mainly supplying pulp and paper sectors).

“Combined, these schemes account for 76% of natural production forest, while the figure for plantations, due to dual certification, is 140%,” said Mr Hentschel.

The requirements of the various schemes, he added, had a lot in common, with the key area of differentiation being their certification of conversion forest. While the FSC scheme will not sanction certification of forest converted since 1994, and the IFCC/PEFC scheme since 2010, the PHPL and LEI standards continue to allow it, subject to specified criteria.

Mr Hentschel also highlighted that initial concerns FLEGT licensing might disincentivise sustainability certification in Indonesia seem to have proved baseless. Since its introduction in 2016, the area of FSC-certified forest had increased by 0.5 million ha, while the area of plantation covered by the IFCC scheme had grown by 1.8 million ha.

In response to Mr Hentschel’s question to delegates whether the FLEGT VPA process and FLEGT licensing were a hindrance or help to spread of SFM certification, one said that FLEGT effectively promoted SFM and in, improving general standards of governance, could ultimately make certification easier, a major benefit in tropical countries where the certification process and its required infrastructure could be very expensive.

Certification and FLEGT licensing operating in conjunction was considered by one delegate as the best option, but where the former was too complex or costly, FLEGT alone was a ‘good solution’ and first step.

“But what is needed is greater communication and cooperation between the two approaches,” they said. 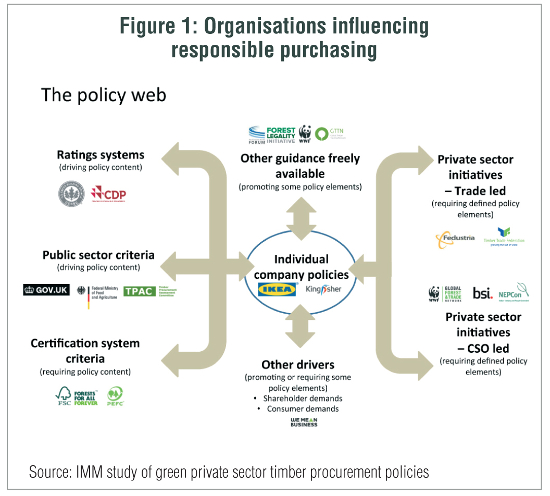 Mr White’s presentation outlined that a vast array of organisations was influencing responsible purchasing policies (figure 1). A literature review identified over 100 organisations, tools, initiatives, templates and sets of guidance which might have an influence on a private sector company policy.

A sample 65 potential sources of influence have been assessed in detail for the IMM study to identify attitudes and support for key indicators such as certification, legal compliance, and support for FLEGT Licencing. In addition, the responsible purchasing policies of 20 large EU based companies from across a range of sectors, from retail to timber importing have been assessed to identify the contents of their policies and the levels of support for FLEGT-licencing.

Mr White concluded that while the nature of the EU Timber Regulation and its universal application across all EU Member States should ensure that FLEGT-licensed timber carries status and meaning in the market, the reality is that Licensed timber remains very much in a niche at present, which is partly due to its limited geographic spread. And even those working within the niche have varying levels of support, belief and trust in the “FLEGT brand” and what it actually stands for. 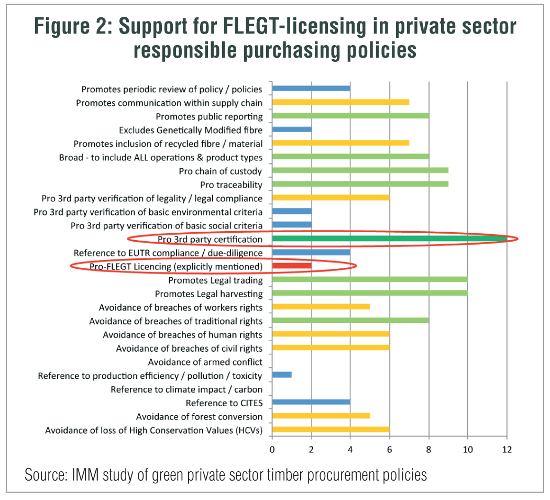 As a result, explicit support for FLEGT in policies is variable and some companies remain wary of including FLEGT.

Mr White also concluded that more “proof” of the value of FLEGT-licensing on the ground is needed to convince people of the value; and he also called to mind that certification has a 25-year head start – and still is not universally supported

Key comments by stakeholders during interviews supporting these conclusions include:

“FLEGT has sustainability elements but these have not been communicated – so no one values them.”

“The TLAS system in Indonesia contains much more than legal compliance. It contains sustainability elements – but we need to know what they are!”

“Some big companies in Europe set the agenda and they are not valuing FLEGT.”

“FLEGT Licencing is not a consumer brand. We don’t want it to compete with FSC.”

The full study will be published on the IMM website early in 2019.