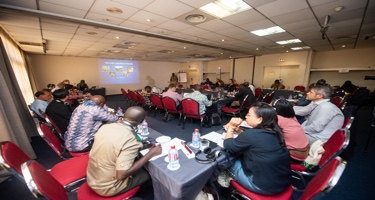 A presentation by the European Commission’s Environmental Directorate (EC DG ENV) to a webinar hosted by FERN, the Brussels based environmental NGO, on 17 March 2021 has indicated that the EU may be considering changes to its strategy with regard to the FLEGT VPA process. The EU is considering introduction of a new regulation to minimise the risk of deforestation in imported products – including soy, palm oil, beef, coffee, cocoa and others, besides timber – placed on the EU market. In some ways, the proposed measures build on the existing policy framework contained in the FLEGT Action Plan. However, they also raise questions about the future of existing instruments such as the EU Timber Regulation (EUTR) and FLEGT licensing systems.

The ITTO summarised the potential implications of the on-going policy discussions, which were highlighted in the presentation, in the 15 April 2021 edition of the Market Information Service (MIS).

Some of the key quotes from the presentation on the EUTR and FLEGT-licensing cited in the MIS include:

On the EC’s preliminary conclusions from their on-going Fitness Check of the EUTR:

“Now I think that we all agree that when the results of the fitness test will be handed out that there has been a positive result with regard to incentivizing companies to keeping supply chains clear, however, we have come across a number of major challenges which is that infractions under the EUTR are difficult to prove and substantiate in court, which undermines its dissuasive power.”

“The term negligible or non-negligible risk is subjective. The legal system in the member states, very often have no clear understanding and no long-standing tradition in dealing with the concept of due diligence. (…)We have seen some member states where this has almost paralysed prosecution and enforcement and made it really hard to apply any sanctions to governments in question”.

On the value of the FLEGT legality licensing approach which has been a core component of the VPA process to date:

“Now, on the FLEGT regulation. I think that we need to make the distinction of what has worked and what hasn’t worked, and I think that the positive story of the FLEGT VPAs, is that where we have VPA processes we see positive results in terms of enhanced stakeholder participation in policymaking and the national level improvements in forest governance and administration and some enforcement.”

“However, when we look at it – and I think it’s not surprising because we’re dealing with illegal logging – there is no hard evidence that VPAs have contributed to reducing illegal logging in partner countries, or the consumption of illegally harvested wood in the EU.”

“So I think that from our perspective, the part where we are not confident has made its proof is the licencing system, and the timber legality assurance system in partner countries”.

The ITTO MIS article also includes quotes from the presentation on the scope of the EU’s planned new regulation on a wider range of forest-risk commodities, the objectives of such a regulation and legislative instruments to be introduced in the EU.

A number of organisations have responded the EC’s preliminary conclusions from the Fitness Check. Fern published a statement titled “FLEGT Fitness Check: Abandoning FLEGT Licenses would harm forest governance and the legal timber trade” on 8 April 2021. The statement says that the EC “considering getting rid of FLEGT Licenses” had been “heard by civil society in VPA partner countries with alarm, and a sense of betrayal that years of good faith efforts could be abandoned”. Dropping VPAs would likely “increase pressure on forests from illegal logging and reverse governance gains”, continued Fern.

Fern also quoted reactions from a meeting between the EC, European Parliament and NGOs from the EU, the Americas, Asia and Africa on 23 March 2021. Participants at the meeting “urged the EU to address the obstacles preventing VPAs from being effectively implemented in a more targeted manner, rather than relaxing or abandoning the innovative scheme”, says Fern. They also suggested that the EU “should strengthen the EUTR’s enforcement, so that illegal timber stops getting into the EU”, a recommendation that echoes concerns expressed at all of IMM’s trade consultations held since 2015.

The stakes are particularly high for Indonesia which has been issuing FLEGT licenses now for nearly five years and has successfully applied its timber legality assurance system (TLAS-SVLK) and SVLK certification to all wood product exports and is looking to the EU to follow up on specific commitments made in its VPA(Article 13) “to promote a favourable position in the Union market” for FLEGT licensed products, including specific “efforts to support: (a) public and private procurement policies that recognise a supply of and ensure a market for legally harvested timber products; and (b) a more favourable perception of FLEGT-licensed products on the Union market”.

This implies continued commitment to the “green lane” for FLEGT licensed products in the EUTR, which at least before the onset of the COVID-19 pandemic was beginning to pay dividends in terms of rising market share for Indonesian wood products in the EU. It also implies efforts to communicate the benefits of FLEGT licensing, of the sort described in the 2020 report by the Center for International Forestry Research (CIFOR) “Collecting Evidence of FLEGT-VPA Impacts for Improved FLEGT Communication”.

A group of 15 Indonesian CSOs involved in monitoring the country’s SVLK scheme delivered a joint statement in late March 2021 in response to interim findings of the FLEGT Fitness Check presented by DG Environment in a multi-stakeholder platform meeting held in late February 2021.

The Indonesian CSOs state that “Without clearly understanding the research method applied to obtain the data, whether the data source has been validated and to what extent the partner countries were consulted, the stakeholders felt that the European Commission was too early in concluding that the VPAs have not contributed to reducing illegal logging in partner countries and did not capture other detailed information related to the impact of FLEGT VPA”.

The statement highlights that “since the implementation of SVLK, the number of illegal logging cases declined from nearly 1800 cases in 2006 to 80 cases in 2020”

The statement also says that “during VPA implementation, legal timber and timber products administrative system (logging, distribution, processing, trade) in Indonesia experienced an improvement, which reduced the space for illegal logging and timber distribution. In the wood chip processing industry, SVLK implementation had a positive impact on reducing indications of illegal timber entering the supply chain”.

Finally, the Indonesian CSO statement “underlined the issue of market uptake, in which the EU has not fully support[ed] and promote[d] FLEGT-licenced timber from Indonesia, as mandated in the VPA text.”

The CIFOR report on VPA impacts highlights a number of achievements of the VPA process in terms of illegal logging and otherwise: “Globally, the VPA process has contributed positively towards a decrease in illegal logging rates, particularly illegal industrial timber in export markets, notably derived from production forests being mandated to have management plans. At the country-level this held true across Cameroon, Ghana, and Indonesia as the share of legal timber in export markets had gone up with direct attribution to VPAs. In Indonesia, the share of national timber production exploited with a legally obtained permit has also gone up. Further, across each country, the ultimate goal of SFM was being better achieved through more thorough implementation of forest management plans”.

CIFOR goes on to note that “the VPA process has contributed positively to a more coherent legal and regulatory framework with sanctions being more regularly enforced and more credible due to the VPA, and to greater transparency in the forestry sector”. CIFOR also observe that “globally, the VPA process has contributed positively to the voices and opinions of local communities and indigenous peoples living in and around forests being better considered during forest-related decision making, as well as to more efficient collection and better redistribution of taxes to these communities. Consultation with and consideration of these groups during forest sector decision making was strongest in Ghana”. Furthermore, “globally, the VPA process has contributed positively to better private sector organization and fewer business disruptions, mainly for small and medium-sized enterprises (SMEs). The opinion of SME operators is now better acknowledged in the political agenda (despite operating largely in informal sectors), and they are better able to coordinate and manage their operations through recognized associations, with some joining the formal timber sector (mainly in Indonesia)”.

The ITTO MIS article cited above concludes that “while … comments [in the EC presentation] on the Fitness Check are preliminary and views may alter before any official EU policy is announced, some of the observations relating to the perceived lack of effectiveness of the EUTR and FLEGT licensing system in removing illegal wood from EU trade imply that the EC is considering a significant change in policy direction.

At this stage it is impossible to foresee the impacts of such a change; however, it is possible that EUTR may be rolled into the broader regulation covering all “forest risk” commodities and including deforestation free requirements. As for the VPAs, after a period of 15 years when the EU has been actively encouraging tropical countries to adopt FLEGT licensing systems for timber products through these legally binding trade agreements, the focus of future negotiations may change significantly.”

However, no matter what is planned for in the future, progress made and achievements of the FLEGT VPA process to date should be built on with positive communication, combined with a concerted effort to ensure consistent application of EUTR across the EU, both to fulfil VPA obligations to promote a favourable position in the Union market for FLEGT-licensed products and to encourage more countries to reach the FLEGT-licensing stage.