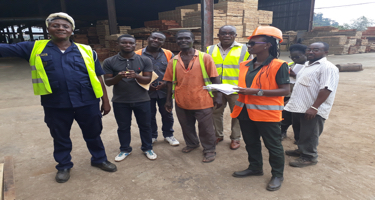 The cargo shipment test evaluating export and import procedures in preparation for the transport of Ghanaian FLEGT-licensed timber to Europe showed that, while some administrative issues need addressing and some procedures fine-tuning, the Ghanaian system works well in principle.

The tests involved a Ghanaian timber exporter, the Forestry Commission of Ghana, timber importers in Germany and Spain as well as Competent Authorities (CAs) in Germany, the Netherlands and Spain.

Step by step, the tests comprised:

On the private sector side, the report found that delays in exporters’ posting shipment documents led to buyers’ receiving the documents as late as three to four days prior to arrival of the goods. This means that authorities would not have time to resolve potential issues concerning the consignment or license, which would then result in delays in custom clearance.

Moreover, a lack of communication regarding HS Codes used in export and import declarations was identified. Deviations between HS Codes used in the respective documents would again trigger interactions between licensing authorities and could also result in delays in customs clearance. This has been seen especially in the early days of FLEGT licensing in Indonesia, too.

In terms of technical/administrative capacities and procedures, the report revealed a number of inconsistencies concerning format and content of the test licenses. Furthermore, resultant communication between CAs and the Forestry Commission would have been slow and responses inconsistent.

Licenses issued after containers were sealed

While the HS Code issue needs addressing on a bilateral basis – and in the meantime requires communication between exporters and importers to agree on an HS Code – the overall number of license mismatches are expected to be much lower in Ghana, once it starts licensing, than it was the case when FLEGT licensing in Indonesia first started.

This is due to a combination of factors: Firstly, compared to Indonesia, the Ghana VPA is set in a far less complex environment. According to the shipment test report, there are only 20-30 regular exporters, the number of export products and HS Codes respectively is small – the product scope of Ghanaian exporters is mostly limited to lumber (4407), mouldings (4409), flooring (4418), veneer (4412), and panels (4412/4418) – and supply chains are straightforward. Secondly a fundamental difference between Indonesia and Ghana is Ghana issuing the licenses after containers were sealed by customs. As a result, the supplier will know the exact quantity of product in each container at the time the license is issued. In Indonesia, there is a time-lag between application and issuance of license and the actual shipment date, during which time the size of an order can change; this would normally mean the exporter has to apply for a new license, but not all companies have consistently been doing this, especially immediately after the start of licensing. Moreover, Indonesia delivers complex products, such as furniture, to Europe and especially smaller and less experienced companies do not always find it easy to determine the exact number of furniture pieces that can be fitted into a container beforehand.

The Ghanaian Wood Tracking System (WTS), which is the technical core element of GhLAS, was found to be working well overall by the test report. Unlike in Indonesia, the Ghanaian system is not based on certification but on online wood tracking, verification of sales contracts and controls of mills’ related inputs and outputs (link to older article with info on system). By the time the shipment tests were conducted the roll-out of the electronic version of the WTS to the offices across the country was not yet complete. However, the system is now fully rolled out and has been up and running since February 2018. Online, real time wood tracking is now enabled.

Other key findings of the shipment test report included:

According to the report, “the shipment test has initiated increased dialogue between Ghana and the participating CAs”. “Effective communication between the involved authorities” is considered crucial “for a functioning licencing scheme and especially the avoidance of delays at customs clearance in the EU”.

Taking feedback from the report and CAs into account, the FC has developed an action plan to address the issues mentioned above. Planned actions include:

The plan is to be implemented from March 2018 onwards.