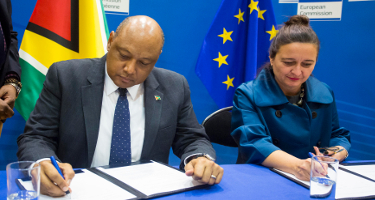 Guyana has become only the second Central/South American country to complete its FLEGT Voluntary Partnership Agreement, following the initialling by Honduras of its VPA earlier this year.

Guyanese Minister of Natural Resources Raphael Trotman and EC Deputy Director-General for International Cooperation and Development Marjeta Jager   initialled the VPA in Brussels on 23 November, opening the way to finalise internal procedures for signing and ratifying it and for subsequent implementation of the agreement.

Mr Trotman described the country’s forest and timber sector as an important contributor to the national economy, which generated jobs and helped reduce poverty. He said the VPA would boost the industry.

“It will improve forest management and governance and, by rooting out illegality, will boost trade and contribute to Guyana’s goals on climate change, biodiversity conservation and sustainable development,” he said.

“The EU is also committed to supporting the country’s efforts to implement the Agreement in the years ahead,” he said.

It is reported that the VPA has already boosted transparency in the Guyanese forest sector, increasing public access to previously undisclosed information.  During the VPA negotiations, the Guyanese authorities also published its draft content, enabling business, NGOs and ordinary citizens to give their feedback.

The VPA process has additionally led to legal reforms and the update and replacement of regulations that had been in place since 1953.

VPA implementation, said an EU statement, will involve Guyana identifying and addressing possible gaps in the forest allocation process and in the legal framework, upgrading systems for tracking wood through the supply chain and improving procedures for verifying legal compliance. It will also help ‘ensure that traditional rights of Amerindian peoples are not impeded’

An independent audits system, complaints procedure and mechanisms for ensuring public availability of forest sector information will all now be established, with the whole process overseen jointly by the EU and Guyana.

Guyana’s forests cover 87% of its 21.1 million ha area, with the government owning 86% and indigenous peoples 14%.

At the time it was highlighted that its Agreement also recognised indigenous peoples as a separate group, alongside other stakeholders, government, civil society and the private sector.

With both Honduras and Guyana now set to implement their VPAs, the EU said there is increased momentum in the Latin American region to combat illegal logging, improve forest governance and promote trade in legal timber.