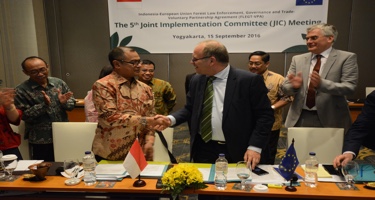 The Joint Implementation Committee for the Indonesian VPA met on 1 March 2018 in Jakarta to review experience with the first 15 months of licensing. According to information from the Indonesian SILK database and the Licensing Information Unit (LIU), more than 39,000 FLEGT licenses were issued during 2017. This means that FLEGT-licenses accounted for 18.2% of all V-Legal documents – paperwork accompanying Indonesian exports globally and guaranteeing timber legality – issued during that period.

The JIC recognised that while “for the vast majority of shipments the FLEGT licensing scheme has been applied without issues, in some cases problems have been encountered”. These problems were primarily attributed to the “novelty of the scheme” and a “need to gain experience with it”.

Problems identified by the JIC were basically the same ones reported to IMM during 2017 surveys and related to:

As these issues started emerging soon after the beginning of licensing, a “Mini Action Plan” was agreed by Indonesia and the EU as early as the middle of last year, recognising the importance of ensuring smooth handling and release of imported goods in the EU, in order to maximise the green lane benefits of FLEGT-licensed timber. The Action Plan was designed to better understand reasons and identify solutions to the license mismatches. It also included measures to improve communication between the EU Competent Authorities (CAs) and the LIU.

In a first step, the EC, in cooperation with authorities from all Member States, produced a comprehensive report summarising all emergent problems with FLEGT licensed shipments to the EU; the report was shared with the Indonesian side.

Moreover, several actions have already been initiated to address the above problems:

Above all, effective communication between LIU and CAs was identified as crucial for resolving problematic licensing cases. The partners are working on implementing standardised communications procedures to fasten and improve information exchange.