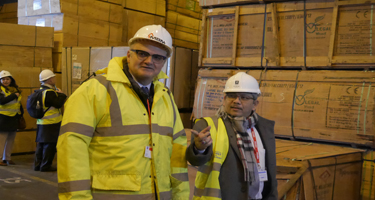 Indonesia and the UK have agreed a raft of areas for bilateral economic, environmental and development cooperation. They include a continued commitment to support and develop Indonesia’s engagement in the Forest Law Enforcement Governance and Trade initiative if and when the UK leaves the EU.(Photo left: Andrew Tilbury of Falcon Panel Products and Indonesian Ambassador Dr Rizal Sukma at the reception of the first FLEGT-licensed wood products in the UK in 2016)

Topics discussed were potential for a new economic and trade agreement, cooperation on education and climate change. Agreements included UK support and collaboration to assist Indonesia on low carbon development and closer economic cooperation and UK backing to help Indonesia attract foreign investment across the range of industries.

The countries also declared their shared commitment to ‘maintaining FLEGT timber trade once the UK leaves the EU’. This agreement builds on a  ‘statutory instrument’ introduced by the UK Government last year, making ‘minor and technical amendments to the existing [UK FLEGT] legislation to ensure it is operable after exit from the EU’. These changes included amending references to the EU, EU institutions and EU administrative processes to UK equivalents and updating legal references to refer to relevant UK legislation.

“The intention is to have a UK Timber Regulation (UKTR) and UK Forest Law Enforcement Governance and Trade regulation (UK FLEGT) that tackle illegal logging and ensure the demand for, and supply of, legally harvested timber for the UK market,” stated the government memorandum on the instrument. The UK is also concluding its own FLEGT Partnership Agreement with Indonesia to succeed the current EU VPA.

The FLEGT IMM Data Dashboard shows the UK remaining by some way the biggest EU importer of timber and wood products from Indonesia. It is also a major importer from other VPA-engaged countries. Consequently there are concerns, if it does leave the EU, that the latter will lose leverage within VPA states and potentially the wider tropical timber sector. The UK government has on a number of occasions, however, stressed its continued support for the FLEGT initiative and the EUTR, although post Brexit, UK operators would have to subject all imports from the EU to due diligence.