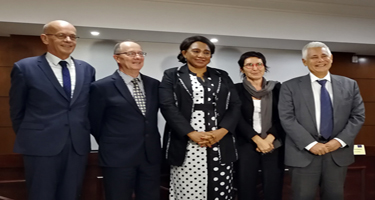 The Republic of the Congo is ‘not far from the end of the tunnel’ on its FLEGT VPA, according to EU Ambassador to the country Raul Mateus Paula. He was talking after the latest meeting of the EU-Congo VPA Joint Implementation Committee (JIC) in Brazzaville on 5-6 June, which was also attended by Congo Forest Economy Minister Rosalie Matondo. (Photo left: Members of the EU-Republic of the Congo JIC. EFI FLEGT Facility)

The JIC concluded that most of the recommendations made and activities advocated at its last meeting in November 2018 had been implemented or were under way. Delegates discussed deployment of the Congo’s legal audit system (SIVL), a software tool for managing timber traceability and legality verification. There had been delays in the process but an interdepartmental group had been appointed to oversee it.

They also addressed independent audit of the country’s timber legality verification system and formulated proposals for following up auditor recommendations on changes and improvements. Publication of the 2018 Joint Annual Report on the Congo’s VPA, due to be finalised at the end of June, was advocated as soon as possible. Mr Paula also urged ‘continuation of efforts to finalise [VPA] communication tools’. The next meeting of the JIC is scheduled for November 20-21.