Obstacles and opportunity – support for Vietnam’s VPA is growing 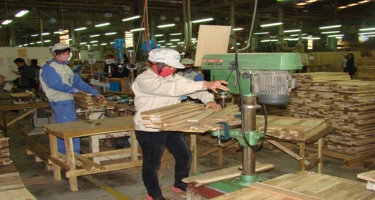 The signature by the EU and Vietnam of the latter’s FLEGT Voluntary Partnership Agreement is scheduled for later this year, with ratification in 2019. They are being heralded as critical staging posts, and important moments both practically and psychologically, in the country’s progress towards full VPA implementation and its start of FLEGT licensing of timber and wood product exports to the EU.

But it’s also recognised that this ultimate destination remains some way off and that challenges still lie ahead. To quote one civil society organisation representative, signing and ratifying mark ‘less the beginning of the end, more the end of the beginning of Vietnam’s FLEGT VPA journey’.

“The next two to three years will be demanding,” agreed VPA Joint Implementation Coordinator for Vietnam Edwin Shanks.  “In fact, some of the main challenges will come in rolling out the necessary systems and mechanisms across what is a very broad, varied forestry and timber processing and manufacturing industry. There’s the Timber Legality Assurance System to establish, including its risk-based enterprise classification system, and timber import controls. Capacity building in compliance among the verification agencies and in the private sector, including the considerable household industry, is also a major task.

“Indonesia had its own difficulties in VPA implementation, notably in its industry’s geographic spread, scattered over thousands of islands,” continued Mr Shanks. “But in some ways Vietnam is more complex; in the structure and diversity of the industry and the variety of raw material sources, with so many countries supplying timber and wood products to Vietnamese companies.”

Others note that Vietnam has also progressed in recent years to become a middle income country. That means there isn’t so much development assistance in the forestry area as in the past. It will have to provide more of the investment needed for VPA implementation itself and, in the words of one commentator “be creative in the way it mobilises support from development partners’.

But, while acknowledging the scale of the task and complexity of some of the obstacles to overcome, Mr Shanks and others also maintained that Vietnam is where it intended to be in the VPA implementation process at this point

and has already laid some solid foundations for the path ahead.

One key step was the launch last year by Vietnam and the EU of the Joint Preparation Committee (JPC) to oversee development of the VPA up to ratification, after which it becomes the Joint Implementation Committee.   At its inaugural meeting in November 2017, the JPC endorsed the multi-stakeholder-drafted Joint Implementation Framework (JIF). This defines implementation process actions and lays out eight strategic milestones on the way to implementation and FLEGT licensing,  ranging from development of the VNTLAS, through capacity building to stakeholder engagement.

“The objective of the JIF is to establish priorities, to sequence actions towards implementation and create a basis for coordination; identifying who’s doing what already and where gaps are,” said Tim Dawson of the EFI FLEGT-REDD facility.

The JPC also agreed on a roadmap of activities for 2018, including preparatory work for establishing the VNTLAS, developing information and communications strategy for domestic and export audiences and devising an ‘action plan for public disclosure’.

Another significant move to ensure broad participation and input and transparency in the VPA programme was last year’s launch of the multi-stakeholder implementation core group (MCIG).

The group’s creation has been hailed as an important advance and evidence of a shift in official attitudes.

“CSOs were consulted in the VPA negotiation phase, but, unlike trade associations, had no official place at the table,” said Tue Tran Ngoc, FLEGT manager at the Centre for Sustainable Rural Development. “So the multi-stakeholder group is significant. It shows government increasingly recognizes the importance of wider stakeholder engagement.”

The role of the MCIG in VPA information and communications work is expected to be a core focus.

“While not everybody has to say exactly the same thing, there is concern in the industry and government that there should be consistency in messaging to ensure clarity,” said Mr Shanks.  “Working with the MCIG is seen as a way of building consensus on this, including in practical matters like using the right terminology, and in the development of standardised communications materials for domestic and export markets.”

Another important development for the VPA was the  Vietnam’s new Forestry Law, which was passed by the National Assembly last November and which will come into effect at the end of 2019. This encompasses a range of areas, from sustainable forest management to ownership rights. It also includes a new chapter on ‘processing and trade’, defining the broad elements of the VNTLAS.  The Government is currently preparing national legislation for implementation of the new Forestry Law as well as for implementation of the VNTLAS. This will include fresh legislation to incorporate the new controls and due diligence requirements for imports and to establish the timber operations risk-based classification system, the process of legality verification for exports generally and the basis of the FLEGT licensing scheme for exports to the EU.

An outstanding issue is how third party monitoring of VPA implementation and impacts, and ultimately FLEGT licensing, will be undertaken and who will do it.

“In Indonesia, independent monitoring is an institutional part of the TLAS,  but in Vietnam, in common with some other VPA countries, the approach is being developed through various forms of agreement between government and different stakeholders,” said Mr Shanks. “Certainly there will be a role for NGOs, but also timber industry associations. How this will eventually evolve remains to be seen.”

In the meantime, some NGOs are piloting monitoring methods, with their findings set to be integrated into an overall framework for consideration by the JPC/JIC.  These include an FAO-backed NGO project to develop an approach for monitoring VPA impacts.

Outstanding concerns include the authorities’ ability to handle the administrative load of the VNTLAS , FLEGT licensing and other export controls.

“It’s estimated Vietnam exports 5,000–6,000 wood products consignments monthly. When the VPA is implemented, this means issuing 170-200 FLEGT licenses per day,” said Dr Phuc Xuan To, Forest Trends senior policy analyst. “Government says licences will be granted electronically and free, but business worries it doesn’t yet have the administrative capability and that delays in licensing could have reputational and financial cost.”

There’s belief government will additionally need to increase bureaucratic capacity for the necessary registration under the VPA of the thousands of household timber producers, he added.

It also remains to be seen whether simpler documentary evidence of VNTLAS compliance will be agreed for SMEs, artisanal businesses and household producers. With logging of natural forest banned, these source their generally lower value wood from plantations.

And despite outstanding challenges ahead, it is felt the impetus behind Vietnam’s VPA from all quarters is growing.  There is continuing liaison and experience sharing on FLEGT, involving the authorities and business, with Laos, Cambodia, China,Indonesia and other countries in the region, both through bilateral dialogue and regional forums.

Government is also reported to be increasingly attuned to the wider value of the VPA. “There does seem to be growing recognition of the importance to the country of the timber export sector,” said Mr Shanks.