The key message of the latest VPA JIC meeting in Congo is that solid progress is being made to develop timber legality verification procedures in line with FLEGT requirements. 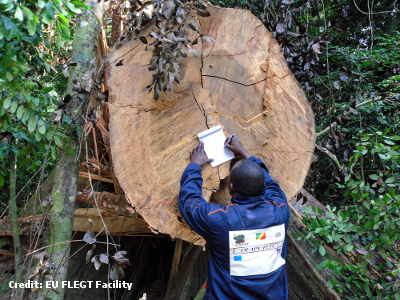 There is still much work to be done, particularly to build infra-structure and capacity in the field, and the FLEGT VPA unit in the country is calling for more funds and technical resources to be mobilised in support of the process. But clear evidence of support for FLEGT by the key Ministries in the country provides confidence that the funds will be found and FLEGT licenses will follow without too much delay.

The 9th meeting of the Congo-EU Joint Implementation Committee (JIC) of the VPA between Congo and the EU was held on 19-23 November 2018.  The main objectives of the meeting were to assess progress towards implementation of the Systeme de Verification de la Legalite (SVL) in the Congo and to agree a work plan for action in 2019.

Legality verification to apply to all exports

The SVL is planned to apply to all timber exports in the Congo, not just those to the EU. Congo exports around 1.1 million cubic meters of timber each year, of which around 85% is destined for Asia, principally China, and only around 13% for the EU. However, the EU is significant for taking a relatively larger share of higher value sawnwood products exported from Congo while Asian markets still prefer logs.

The JIC meeting was split between a technical session on the first day and a high-level session on the second day. The latter session was attended by the Congo Minister of Forests and the Head of the EU Delegation in Congo.  The session included a review of the previous day’s technical work, signing of the official aide memoire, and presentation to the media.

The IMM Trade Analyst attended the meeting to report on the role of the FLEGT IMM, to gather information on the progress of the VPA in Congo, and to link up with agencies in Congo interested in sharing market monitoring data with IMM.

Key results of the VPA process so far were presented to the Technical Session by the Forest Legality and Traceability Centre (CLFT) which is empowered to implement the VPA. These include: revision of the forest code; 50 new procedures for control of verification and legality development; production of a manual of procedures for verification against the legality grid; production of a manual for treatment of non-conformance to the SVL; and preparation of a template for evaluation of forest enterprises.

CLFT noted that, of 29 indicators to monitor implementation of SVL, 6 are already met, 8 are in the process of being met, while work has yet to begin, or is only in the early stages, for the remaining 14 indicators.

However, considerable work is required now to ensure effective deployment in the field. A representative of the France-based auditing company SOFRECO reported on their audit of the SVL operation and level of compliance in two regions (Niari and Lekoumou). This revealed problems due to lack of regulatory capacity, for example many forest operators still have no management plan even after 10 to 15 years of operations. Furthermore, reporting of extraction to authorities often occurs after harvesting, so there is no possibility of prior control. A legal requirement for 85% transformation prior to export is not met by most operators.

SOFRECO recommended “massive investment” to ensure that regional forest administration (DDEF) personnel have the resources needed for control. Sanctions also need to be applied to those operators with no management plan.

SOFRECO reported that the audit process will continue in 2019. An audit report on Cuvette Ouest is currently under review, while another audit is planned to be undertaken in another region (Sangha). Audits are also due to be undertaken of the central forest administration and other administrations covering, for example, customs, transport, justice, and commerce.

While the prospects for full implementation of FLEGT licensing still seem daunting, there are some encouraging signs that solutions will be found. Specifically, the dialogue at the JIC implied strong support for the VPA process from key Ministries, notably the Finance Ministry, which increases the likelihood that the necessary funds will be found.

A principal incentive for engagement by the Finance and other Ministries, perhaps more significant than any strong expectation of greater market access in the EU, is the potential of the SVL to increase tax revenues.  However, the Forest Minister made a point of highlighting the potential value of the EU market as an outlet for further processed products and reducing the existing high dependency on logs.

Meanwhile efforts are being made to enhance information transfer and transparency. Information is now made regularly available at a dedicated Congo FLEGT VPA website. A strategy for communication both nationally and internationally is being developed.  A study of the structure of the national timber market will be undertaken in 2019.

The IMM presentation to the technical session informed the JIC of the IMM project, and provided details of the results of recent trade analysis and surveys which have revealed that: FLEGT licensing is now operating smoothly in the case of imports from Indonesia; there is clear evidence that licensing is easing the process of EUTR conformance; EUTR implementation is being tightened to such an extent that it is becoming difficult for tropical wood to be imported into the EU in the absence of licensing; and the EUTR is leading to growing concentration of trade in larger operators, both on the import and export side.

On the other hand, IMM noted that EUTR is not the only, or even the most significant factor influencing market development of tropical wood in the EU. Against this background IMM emphasised that licensing provides an opportunity to ease the process of EUTR conformance in the EU, and a foundation for wider market development strategies, but may not in isolation lead to a revival in the EU market for tropical timber.

The presentation encouraged a wide range of questions, notably on the processes used for statistical analysis and surveys, and the prospects for IMM to recruit a French speaking Congo correspondent to allow for more regular liaison between the Congo JIC and IMM.

There was also much interest in the extent to which IMM is analysing markets other than the EU, particularly given the overwhelming importance of China in the export mix. In response IMM provided background on IMM work to develop a global trade flow database and also on the Global Green Supply Chain initiative, emphasising that a strength of IMM is the close link to ITTO and their work to facilitate this initiative.

Other presentations provided insight into other market issues that are relevant to IMM monitoring. Particularly significant was the presentation by the ATIBT consultant in Congo on a joint ATIBT-FRMi project in Congo to analyse potential synergies between SVL and the existing traceability systems of forest operators.

The ATIBT consultant introduced the presentation by noting that through accords signed between the Congo Ministry of Forestry and the Congo trade associations UNIBOIS and UNICONGO within the scope of the project, financial support is provided for activities initiated by the private sector to ensure conformance to VPA requirements. The ATIBT-FRMi project is one outcome of those accords.

The ATIBT-FRMi project was initiated in response to concerns that some of the SVL commitments may duplicate work already undertaken by the private sector to ensure traceability of their products through certification and legality verification systems. On the other hand, SVL creates an opportunity to exploit synergies between the systems.

Six forest operators in Congo were actively engaged in the project work which was undertaken earlier in 2018. A general report has been prepared examining the broader synergies and the current status of tracking systems implemented by operators. This has been supplemented by more detailed confidential reports for each company participant on the performance and conformity.

Overall, five of the 6 tracking systems examined were assessed to be of good quality overall and sufficient to give assurance of legal export in line with SVL requirements. However, to maximise synergies, it was suggested that certain logistical elements of the SVL could be adapted.

In informal conversation with participants at the JIC, it was clear that interaction between licenses and certification is considered a critical issue by both trade and civil society in the region. Some private sector interests expressed their concern that licenses will undermine progress to develop certification in the region.

On the other hand, others from the FLEGT community emphasised that FLEGT and certification are complementary. In practice, it was suggested, certification becomes much more accessible to a wider range of operators only through a process of sector-side reform.