UK government recognition of FLEGT-licensing in timber procurement policy as evidence of legality and sustainability on an equal footing with FSC and PEFC schemes is a major credit to the initiative. However, more market promotion, communication and education is needed before a FLEGT licence achieves the broad awareness and acceptance levels of these ‘brand-leading’ certification schemes. That’s the view of David Hopkins, managing director of the UK Timber Trade Federation (TTF).

Speaking at the IMM Trade Consultation, he said that the TTF had been one of the foremost advocates and supporters of the FLEGT VPA and licensing initiative from the outset. In conjunction, it was also a prominent backer of the EU Timber Regulation. He described himself personally as a ‘fan’ of licensing.

“The market and consumers increasingly want assurance that timber and wood products meet the highest environmental and ethical standards, but previously for this we only had voluntary certification schemes, FSC and PEFC. They came in to fill the gap left by the lack of a proper regulatory framework and have subsequently developed their market penetration and brand profiles significantly,” he said. “But now we also have this regulatory structure in the form of the EU FLEGT initiative and FLEGT licensing, which has to be an advance – it’s the regulatory world catching up with the voluntary schemes. At the same time it’s clearly not deterring or barring these schemes from the market, it’s operating alongside, which also has to be a healthy, positive situation.”

It is, he said, understandable that general awareness of the EU FLEGT initiative is still relatively low ‘for a number of reasons’.

“Firstly knowledge of and interest in the detail of regulation and policy generally is not great, it’s pretty low on most people and businesses’ list of priorities – usually only coming to mind when the questions arise ‘can I or can’t I do this particular thing, or buy that particular product’,” he said. 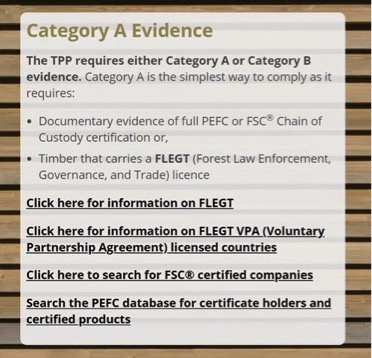 The market profile of FLEGT licensing, he added, is also limited by the fact that to date only one country, Indonesia, is exporting licensed products. “That means there is a limited selection of products available appealing to a limited number of buyers and end users,” said Mr Hopkins. “Also, while the first arrived over a year ago, that is still very early days in commercial terms. They are really only just coming onto the market.”

Despite these constraints, however, the TTF is confident more can be done now to strengthen FLEGT-licensing’s image and grow market knowledge and is itself increasingly proactive in this area.

The IMM Trade Consultation began with a tour of the Federation’s two month long public ‘Timber Transformer’ exhibition at the London Building Centre. Supported by the UK Department for International Development, this is about Indonesia’s journey through the FLEGT VPA process and start of licensing.

The TTF has also included a dedicated section on FLEGT and FLEGT licensing and its status in government TPP in the Sustainable Timber Procurement module of its Wood Campus online timber training programme. This is a Royal Institute of British Architects (RIBA) continuing professional development-accredited resource and a video on it, fronted by Mr Hopkins, is posted on the RIBA website and those of the British Institute of Interior Design and, of course, the TTF.

“We’re also including information on FLEGT and government TPP in other training materials for architects, designers and other market shapers and procurers, such as contractors,” he said. “In addition we’re urging our members to inform and educate their customers about FLEGT and we’ve written to all UK local authorities recommending they put their personnel through our procurement training programme, with a view that public procurement is also a key driver for private sector practice.”

While acknowledging the challenges it faces, the TTF, Mr Hopkins concluded, still remains ‘very positive about the potential and prospects for FLEGT licensing’.

“The central role of our organisation is to get out there in the market and persuade people to buy and specify more timber and FLEGT forms an integral part of our assurance that our members are providing the timber they can trust.”

Mr Hopkins’ presentation to the IMM Trade Consultation is available for download here.