The IMM 2017 survey serves as a baseline for EU trade perceptions of the Indonesian FLEGT-licensing system and day-to-day management of importing Licensed timber. Repetition of the same questions in 2018 and 2019 now allows for comparison over time. Chart 1 shows a sharp and constant rise of the proportion of respondents finding the administrative process of importing FLEGT-licensed timber easily understandable and manageable over the last three years. The number of respondents highlighting challenges continued to fall in 2019, after declining sharply in 2018. 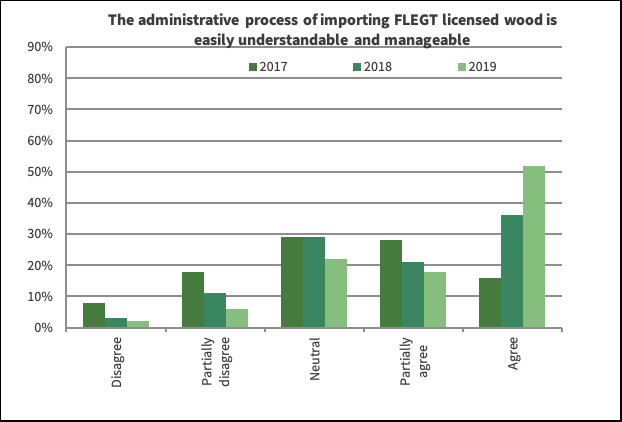 Like in 2018, the positive overall perception of administrative processes involved in importing FLEGT-licensed timber was confirmed by the question addressed in chart 2 both in 2018 and 2019. In both years, about 80% of respondents said that FLEGT-licensing was making importing wood products from Indonesia easier compared to EUTR due diligence. With one or two exceptions, the remaining respondents were neutral on the subject. In 2017, a significant number of respondents had still partially (12%) or fully (20%) disagreed with this statement. The number of respondents fully agreeing to the statement increased by another 10 percentage points in 2019. 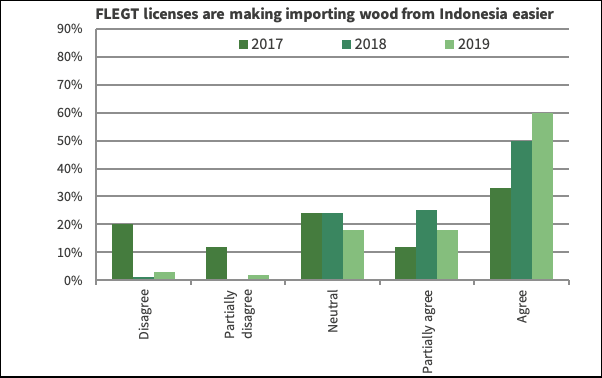 The question what FLEGT had to offer in terms of proof of sustainability was one of the major issues of interest that emerged from the 2017 trade survey. As a result, IMM included the statement “FLEGT means “just legal” and has nothing to offer in terms of sustainability” for assessment in the 2018 and 2019 survey. Chart 3 demonstrates a significant shift in perception from 2018 to 2019: the proportion of respondents that fully or partially disagreed with this statement rose from 19% in 2018 to 33% in 2019, meaning that a significantly higher number of respondents is beginning to acknowledge wider benefits of FLEGT. 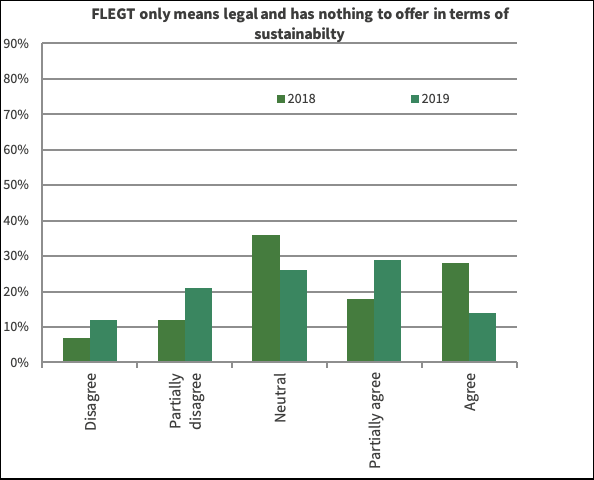 Responses to the question whether companies would give preference to FLEGT-licensed timber from Indonesia over unlicensed timber from competing sources still remain mixed (chart 4). However, the number of respondents who explicitly said they would not give preference to FLEGT-licensing timber has declined sharply since 2017. Respondents to the IMM survey and participants at IMM Trade Consultations remarked that FLEGT-licensing was a factor that could impact purchasing decision, but only where other product criteria were equal.

As a part of its Trade Consultations, IMM holds workshops on purchasing dynamics, decision making processes and the question where FLEGT-licensing sits within these processes. At all 2018 and 2019 Trade Consultations, participants remarked that they would consider business and commercial considerations first and foremost. Top of the list, alongside price, was ensuring that the supplier can deliver the product in the time frame required and in consistent quality and specification. 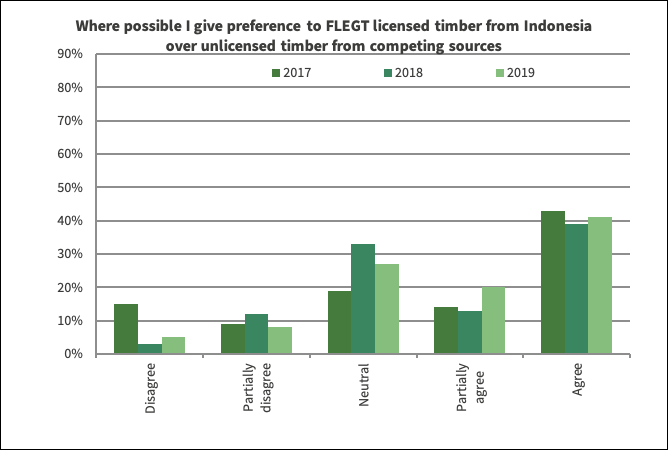 Only once buyers are satisfied on the above points, does the focus move more to chain of custody, certification, sustainability, legality verification and capacity to provide EUTR due diligence information. As a result, FLEGT-licensing can be considered a factor that can positively impact purchasing decisions, but only if the product is competitive at other levels as well.

The 2018 and 2019 EU trade surveys also looked in more detail into the level of information and awareness of the Indonesian FLEGT-licensing system than the 2017 survey. Chart 5 shows that, while there is a definite need for additional information on a number of aspects, awareness, especially of wider environmental, social and economic implications of VPA implementation has improved from 2018 to 2019. The proportion of respondents saying they were fully aware that FLEGT-licensed products “comply with a broad range of laws and regulations including those relating to forest management, environment, labour rights, community benefits, import and export, and payments of fees and taxes” increased sharply by 17 percentage points, from 43% to 60%. A similar increase, from 35% to 52% was shown for full awareness that “for the Indonesian authority to issue a FLEGT licence, all suppliers in the exporter’s supply chain must have been covered by a valid legality or sustainable forest management certificate, or a Suppliers Declaration of Conformity”. 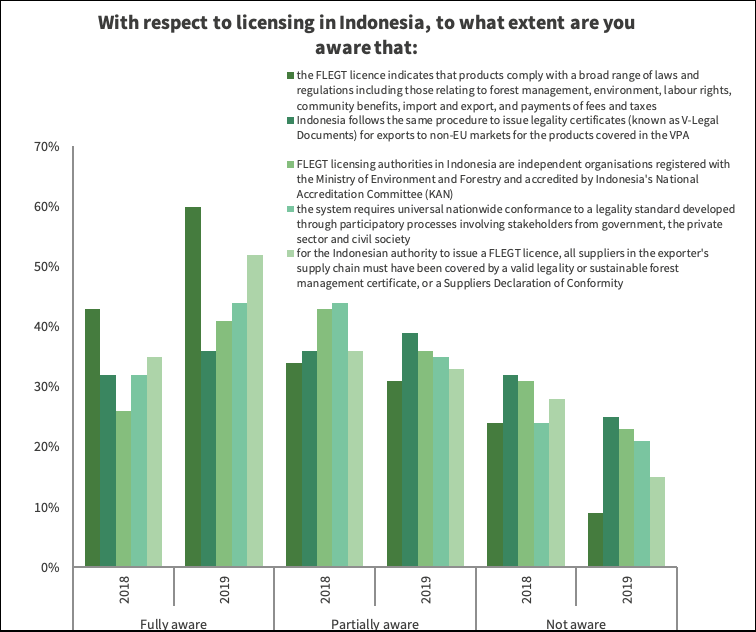