The opening workshop of the Barcelona consultation gave delegates the chance to discuss the state and outlook for FLEGT licensed timber; the challenges and opportunities, market constraints and how to tackle them. Titled “Trends in demand for VPA partner timber – Background, Reasons and Solutions”, the context for discussion was set by IMM Trade Analyst Rupert Oliver. He provided a statistical snapshot of the international market for timber from VPA partner and competing countries, with a particular focus on exports to the EU. 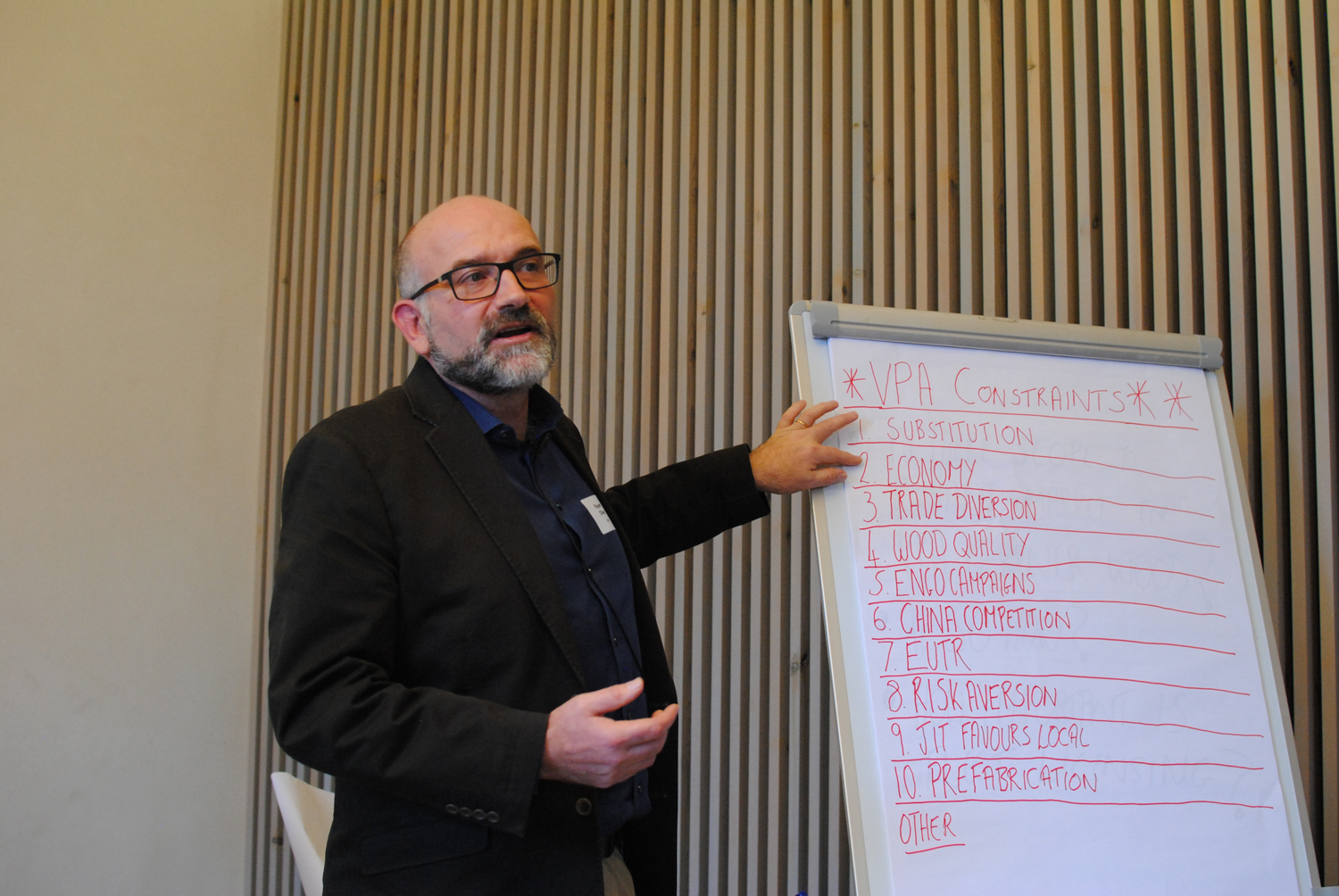 “That the global trade has expanded may come as a surprise to some,” said Mr Oliver. “But it’s pretty much down to a single country, Vietnam. Its growth, chiefly in furniture exports to the USA, has been impressive, with exports recently increasing by around $1 billion per annum, making it today the biggest tropical timber supplier.”

Significantly, he added, Viet Nam has a ‘very ambitious programme to implement its VPA’. Once this is achieved, Viet Nam has potential to ‘transform the market for FLEGT-licensed timber’.

Of particular interest in the context of FLEGT-licensing, he highlighted the widening trade gap between Viet Nam and the second biggest tropical timber exporter, Indonesia, the only FLEGT-licensing country to date. Factors behind this trend is something the IMM project is now considering in more detail.

Of VPA partner countries, the lead African exporter is Cameroon, a major supplier of tropical wood products to the EU and the biggest to Spain. A decade ago, African countries had been expected to develop trade in value-added goods, said Mr Oliver, but this has not materialised on any scale and they remain principally primary product suppliers. “Policies to drive African transition from exports of primary to more processed products have had only limited success,” he said. “That’s principally due to the increase in demand for raw material from China and south east Asia and the accompanying decline in importance to African suppliers of the EU market.”

The Chinese market for tropical timber has been volatile in recent years. It hit a peak in 2014 due to a speculative boom in demand for rosewood, then shrank as this ended and the economy slowed. “Chinese buying recovered some ground in 2017 and 2018 but prospects in 2019 remain uncertain, particularly due to the trade dispute with the US” said Mr Oliver.

Other lead consumers of timber from VPA partner countries are the US, mainly in the form of furniture, and Japan, which sources a range of processed products from across south east Asia and biomass from Viet Nam.

From being the world’s leading import region for tropical timber, the EU is now fourth biggest, with its market share dropping from 35% in 2004 to an expected 21% this year.  Total EU tropical timber imports in the first half of 2019 increased 16%, with Spain’s rising 20%, but it remains to be seen if this was a ‘bump in the road’, a statistical blip, or the start of sustained growth.

Certification might have been expected to underpin the EU market for tropical timber, but there is now a question mark over its potential to support recovery in demand, said Mr Oliver.

“The certified forest area has expanded, but it’s been principally in temperate countries with their more regulated markets and established forest governance, essentially the low-hanging fruit for certification schemes,” he said. “Certification coverage in tropical countries remains small.”

The question he put to delegates was whether FLEGT had potential to reinvigorate EU demand for timber products from VPA partner countries. One market benefit it was perceived as having, he said, was scale, with FLEGT VPAs and their associated legality assurance systems covering whole countries, and FLEGT licensing, once achieved, applied to all exports to the EU. 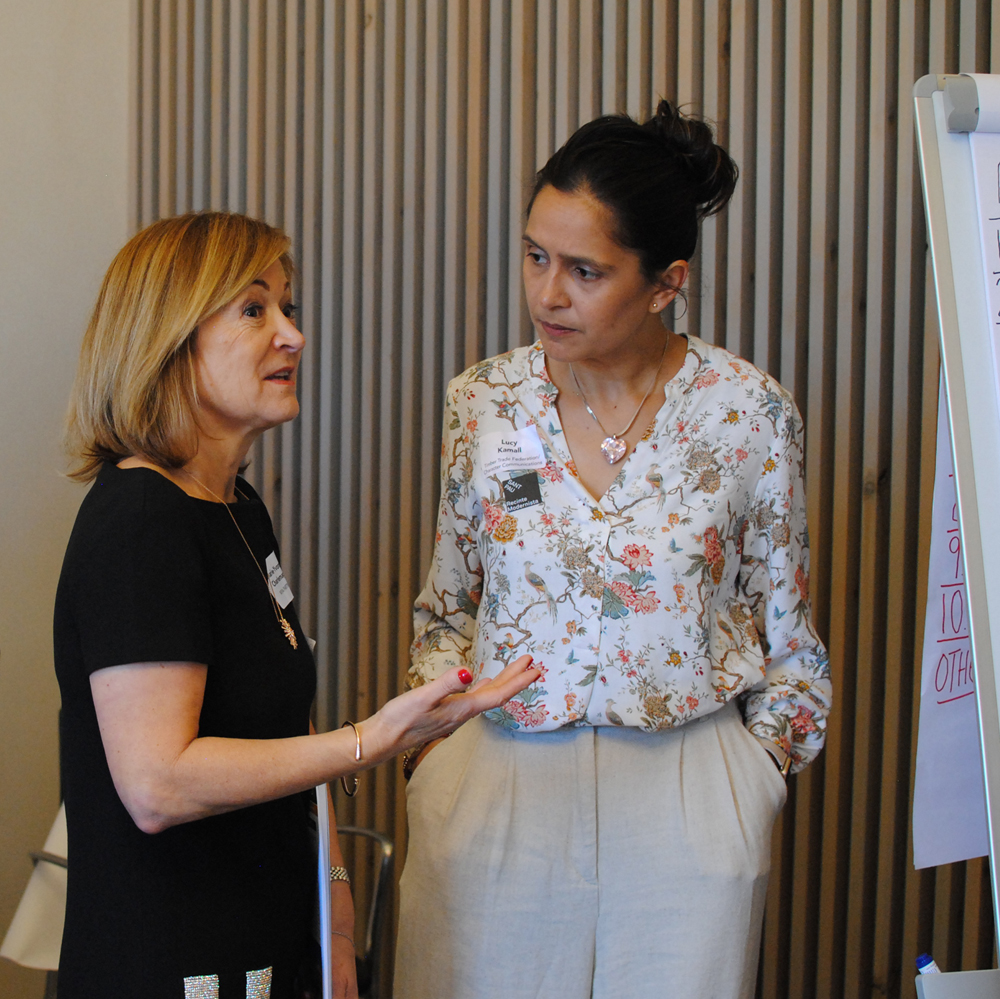 Delegates talk through the issues

Delegates were subsequently presented with ten challenges and constraints in the EU market for products from VPA partner countries, listed in order of importance by previous IMM Trade Consultations, and asked to rank them from their experience. 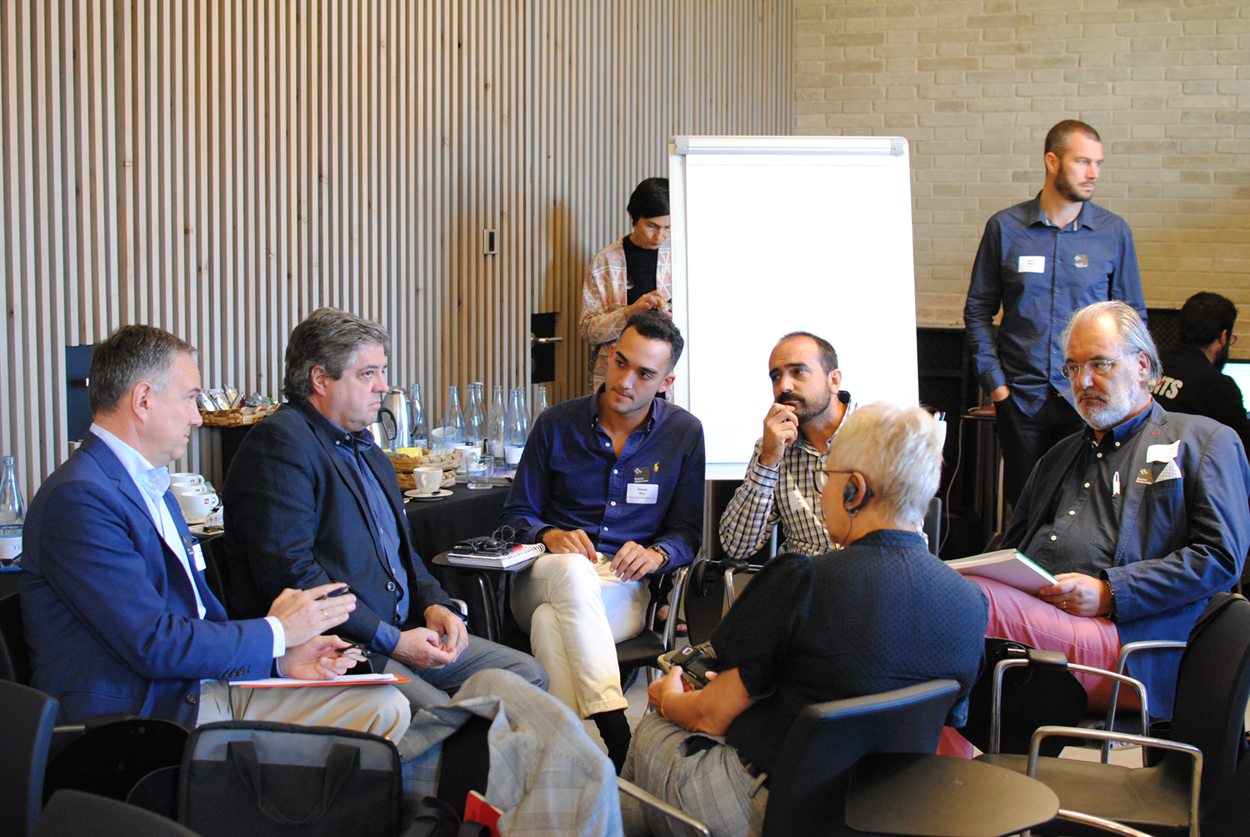 Spanish timber companies saw things differently to earlier consultations.  They still ranked substitution of VPA partner timber products with alternatives, such as temperate hardwoods, wood-plastic composites, modified and engineered softwoods, as an important market factor. But they rated the EUTR as the biggest brake on business with tropical countries that have yet to implement licensing. This was followed by substitution, eNGO influence, Chinese competition, the state of the EU economy and wood quality.

The high ranking of the EUTR, said one importer, could be due to a perceived recent step-up in enforcement in Spain, resulting in increased risk aversion and the Spanish approach to administering the regulation, covered later in discussions with the representatives of the Competent Authority, the Ministry for Agriculture, Food and Environment (MAPAMA).

Delegates also flagged up insufficient marketing of timber generally and timber from VPA partner countries in particular. “The approach is very fragmented and also very reactive, notably responding to critical environmentalist campaigns and initiatives,” said one. “We need to be proactive, to collaborate and agree on common messaging.”

Delegate workgroups discussed how best to communicate and raise market awareness of the FLEGT VPA initiative and FLEGT licensing and their potential to support and help grow EU sales.

Echoing views at previous Trade Consultations, a number of delegates urged creation of branding for FLEGT. Others stressed the importance of communicating the range and availability of product from FLEGT VPA-engaged countries. “In Spain particularly we need to know more about the Indonesian industry and its products as it’s not currently a major supplier for us,” said an importer.

The wider social, economic and environmental impacts on the ground of FLEGT VPAs, over and above their timber legality assurance, also needed to be better understood and communicated, said delegates.

There were also calls for VPA partner countries themselves to be more proactive in marketing and, as one delegate said, ‘to communicate with one voice’. “This is effectively what certified companies do via the FSC and PEFC,” she said. It was also found important that for VPA countries to cooperate on communications and for Indonesia and Ghana [as the first country to issue FLEGT licences, and the one expected to start next] to lead the way.

Government procurement policy was placed as the next most significant market influencer. Subsequent discussion underlined that the key change desired here was for EU Member State governments to give equal preference to FLEGT-licensed timber as FSC and PEFC certified. Currently only the UK and Luxembourg do so. 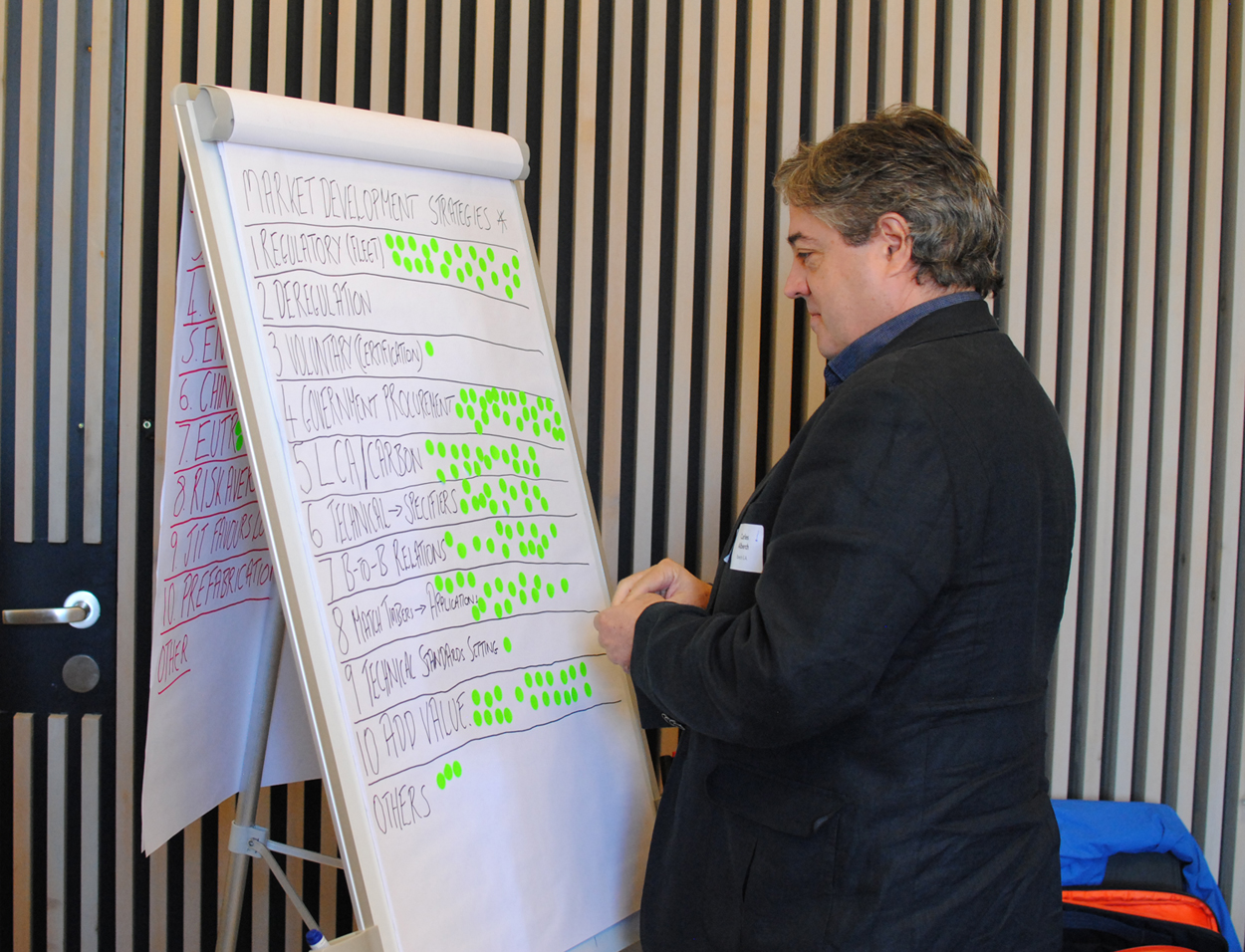 The next most highly rated market development strategies were:

Among other recommendations for maintaining and building market interest in FLEGT were more regular bulletins on the progress of suppliers through their VPA process.

Representatives of the Spanish FLEGT and EUTR Competent Authority MAPAMA told the Trade Consultation their role was very much to support industry regulatory compliance.

One representative said the organisation handles an average 140-150 FLEGT licences monthly and works closely with Spanish customs and the Indonesian authorities to ensure effective, efficient processing.

EUTR administration and monitoring is carried out on the ground by 17 regional authorities, while MAPAMA is the hub of the operation. The Spanish CAs’ compliance checklist is based on the UK’s, as one of the first countries to develop one, and they operate a risk-based inspection strategy focused on a range of criteria. They also act on intelligence and substantiated concerns and complaints raised by third parties, including NGOs.

“But we don’t see our primary role as prosecuting regulatory breaches,” said a representative. “Via the regional authorities, we support industry compliance through due diligence training and workshops. In the event of non-compliance, we first issue remedial notices. Sanctions are a last resort.”

One delegate said that the devolved approach on EUTR administration risked discrepancies in approach from region to region, raised concerns over unfair competition and had potential to cause trade confusion. Assurance was needed that they operated to a common standard.

According to the CA, there are measures to ensure this, including a national control plan for regional authorities. They also had a sectoral conference and centrally administered training. MAPAMA was additionally looking at introducing more advanced sample testing on a national basis, following the example of the UK and Germany in particular.

“Some regional authorities may be slower than others in their general administration, but we are overall stepping up efforts to ensure their uniform operation nationwide,” he said.

Larger operators were not dealt with any differently by Spanish competent authorities and that all companies faced the same risk-based scrutiny.

Spain was also reported to be the only EU country requiring companies to make an annual ‘responsible declaration’, identifying themselves as operators under the EUTR.